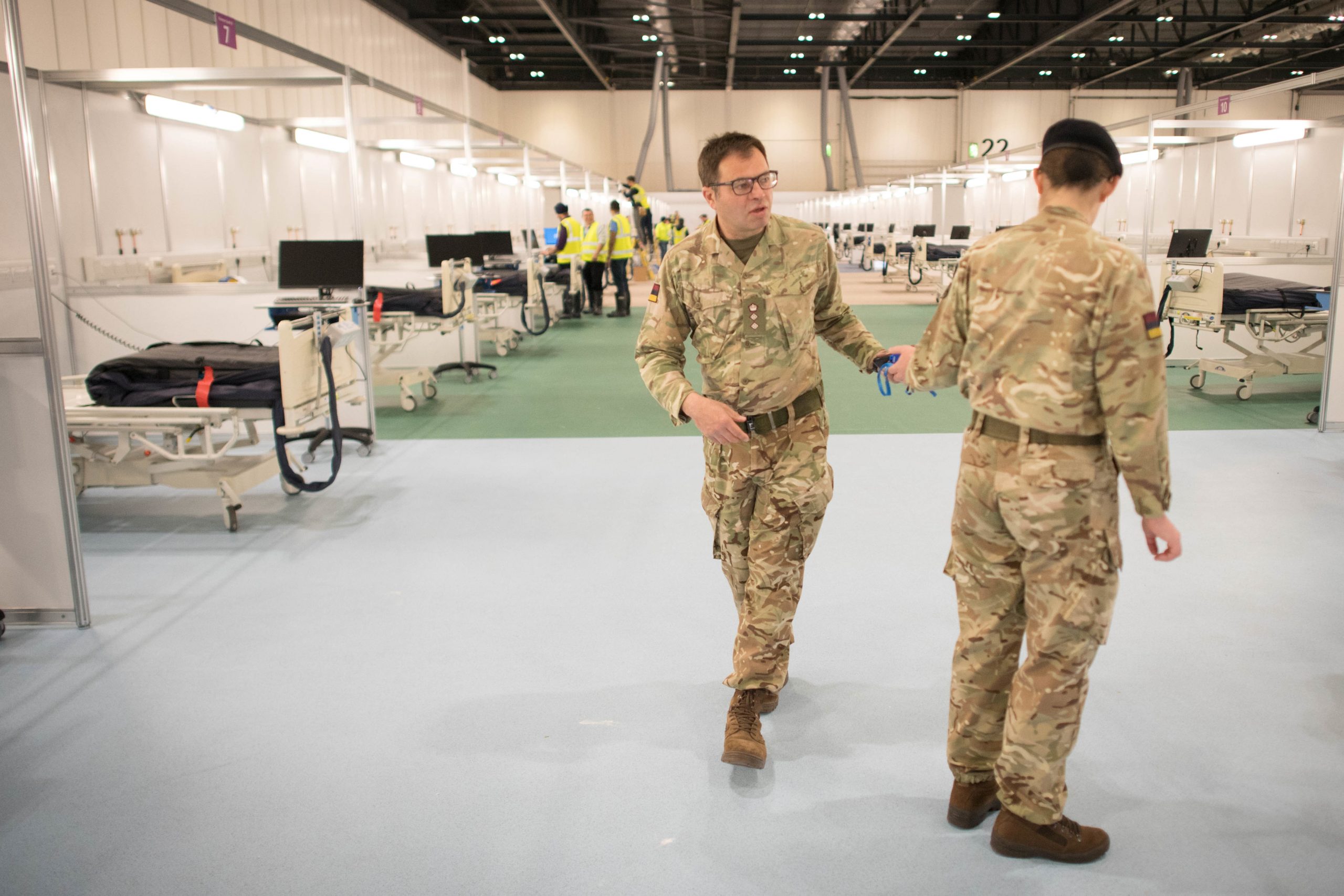 Military personnel is seen at ExCel London, during its conversion into the temporary NHS Nightingale Hospital, comprising of two wards, each of 2,000 people, to help tackle the coronavirus disease (Covid-19) outbreak, in London, Britain on March 31, 2020. As on date, the UK registered over 25,000 Covid-19 cases and 1,829 deaths. (Photo: Stefan Rousseau/Pool via REUTERS)

THE coronavirus pandemic is the most challenging crisis the world has faced since World War II, one that is killing people and will also lead to an economic recession without any parallel in the recent past, warns UN Secretary-General Antonio Guterres.

“We are facing a global health crisis unlike any in the 75-year history of the United Nations — one that is killing people, spreading human suffering, and upending people’s lives,” Guterres said on Tuesday, while launching a new report ‘Shared responsibility, global solidarity: Responding to the socio-economic’ on the socio-economic impact of the Covid-19.

The current coronavirus pandemic was much more than a health crisis. It is a human crisis, Guterres said at the virtual launch of the report.

Later, in response to a question on why he thinks the pandemic is the worst global crisis since the UN was founded, Guterres said “because it is a combination, on one hand, of a disease that represents a threat to everybody in the world and, second, because it has an economic impact that will bring a recession that probably has no parallel in the recent past.”

“The combination of the two facts and the risk that it contributes to enhanced instability, enhanced unrest, and enhanced conflict are things that make us believe that this is, indeed, the most challenging crisis we have faced since the Second World War and the one that needs a stronger and more effective response that is only possible in solidarity if everybody come together and if we forget political games and understand that it is humankind that is at stake.”

The UN chief said the human crisis demands “coordinated, decisive, inclusive and innovative policy action from the world’s leading economies – and maximum financial and technical support for the poorest and most vulnerable people and countries.”

Guterres called for “an immediate coordinated health response to suppress transmission and end the pandemic” that “scales up health capacity for testing, tracing, quarantine and treatment, while keeping first responders safe, combined with measures to restrict movement and contact.”

He underscored that developed countries must assist those less developed, or potentially “face the nightmare of the disease spreading like wildfire in the global South with millions of deaths and the prospect of the disease re-emerging where it was previously suppressed.”

“Let us remember that we are only as strong as the weakest health system in our interconnected world,” he said.

In tackling the devastating social and economic dimensions of the crisis, the UN chief pushed for a focus on the most vulnerable by designing policies that, among other things, support providing health and unemployment insurance and social protections while also bolstering businesses to prevent bankruptcies and job losses.

Further, he said nations must tackle the devastating social and economic dimensions of this crisis, with a focus on the most affected: women, older persons, youth, low-wage workers, small and medium enterprises, the informal sector and vulnerable groups, especially those in humanitarian and conflict settings.

“We must see countries not only united to beat the virus but also to tackle its profound consequences. That means designing fiscal and monetary policies…,” he said, adding that a large-scale, coordinated and comprehensive multilateral response amounting to at least 10 per cent of the global gross domestic product is required urgently.

Debt alleviation must also be a priority, Guterres said, noting that the UN is “fully mobilised” and is establishing a new multi-partner Trust Fund for the Covid-19 Response and Recovery to respond to the emergency and recover from the socio-economic shock.

“When we get past this crisis, which we will, we will face a choice,” the UN chief said, “we can go back to the world as it was before or deal decisively with those issues that make us all unnecessarily vulnerable to crises.”

The report also includes estimates from a host of UN agencies on the severe impact of the pandemic on various aspects of life.

According to the UN International Labour Organisation, five to 25 million jobs will be eradicated, and the United States will lose $860 billion to $3.4 trillion in labour income.

The UN Conference on Trade and Development (UNCTAD) projected a 30 to 40 per cent downward pressure on global foreign direct investment flows while the World Tourism Organisation (UNWTO) saw a 20–30 per cent decline in international arrivals.

Meanwhile, the International Telecommunication Union (ITU) anticipated that 3.6 billion people will be offline and the UN Educational, Scientific and Cultural Organisation (UNESCO) forecast that 1.5 billion students out of school.

Guterres called the pandemic “a defining moment for modern society,” saying the “history will judge the efficacy of the response not by the actions of any single set of government actors taken in isolation, but by the degree to which the response is coordinated globally across all sectors for the benefit of our human family.”

“With the right actions, the Covid-19 pandemic can mark the beginning of a new type of global and societal cooperation,” Guterres said.