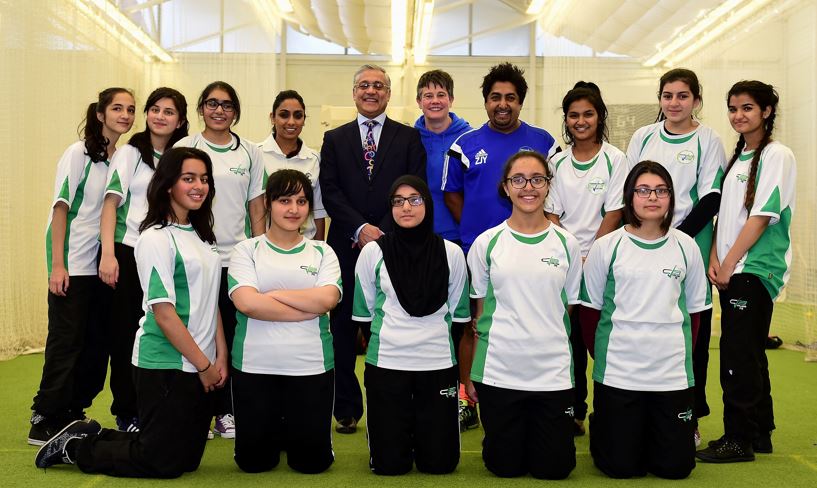 Lord Kamlesh Patel (centre, in a suit) and ex-England cricketer Isa Guha (fourth from left, back row) with girls from Carlton Bolling School in Bradford
Follow Us

AZEEM RAFIQ’S treatment at Yorkshire and the subsequent racism storm that engulfed English cricket can be a “watershed moment” for the game to addresses its mistakes and make meaningful long-term changes, according to the journalist who the cricketer first spoke to about his ordeal.

James Buttler, of the Cricket Badger podcast, was speaking at a round-table event titled It’s Just Not Cricket – Why 2022 Must Be a Year of Action for Race and Inclusion in Sport, hosted jointly by Eastern Eye newspaper’s publishers, the Asian Media Group, and the British Future thinktank last Tuesday (12).

Buttler, who was also Yorkshire’s media manager from 2007-2011, said, “Azeem has given Yorkshire and the whole sport a golden ticket to actually draw a line in the sand and have that watershed moment, where you have an excuse almost as a committee or a board to actually make these changes off the back of what as he has given you.

“And, basically, take everything back to square one and be honest and be truly open and say, ‘right, we’ve made mistakes in the past. Now we are going to involve everybody, we’re going to talk to people, we’re going to actually join hands around the country to make cricket diverse and inclusive.’”

He was joined on the panel by Halima Khan of Opening Boundaries, and Sunder Katwala of British Future as well as the event’s chair, Barnie Choudhary, Eastern Eye’s editor-at-large.

Buttler revealed that during his time at Yorkshire, British Asians fans were just seen as a “revenue stream”. He added that if the England and Wales Cricket Board (ECB) wanted to implement its 12-point strategy to tackle racism and make the game inclusive, the Asian community should be integral to the plan.

“The 12-point plan can’t just be white men, like me, sitting around a boardroom making changes. The key thing with that is to go out to different cultures, and make them own that plan.

“This 12-point plan is a good starting point, but you need to involve everybody in that because if you end up just going to a cricket club in Bradford and say, ‘this is the 12-point plan. This is how it’s gonna work,’ then that’s just a white guy telling other people how this is going to operate, isn’t it?’

“You need to make people actually own the sport and own the changes in the sport, otherwise, it’s going to be something that’s dictated to people and that isn’t a very healthy way forward.”

Khan grew up playing cricket on the fields of Bradford, and witnessed firsthand the love British Asians have for the game and its power to bring people from different cultures together. She said Bradford was one of the few places where she had a chance to mix with women from different backgrounds to her own.

“Yorkshire County Cricket Club and the ECB have lost any trust the local Asian community had in them. That is a missed opportunity and one they will need to work hard to address,” Khan said.

“There has to be a cultural change, there has to be leadership, which is more visible. Yorkshire’s former head coach, the CEO, they haven’t even come out and acknowledged or even apologised for the way they handled the situation. They just seem to have vanished into the distance.

“Then you had Lord (Kamlesh) Patel come in, a person of colour apologising to another person of colour. I will probably disagree with Lord Patel in that he should not have apologised for something he didn’t do. People have to acknowledge there is racism that exists and only then, especially from a leadership point of view, can you move forward.

“I’m a Yorkshire woman. I want to be able to go to that club and say, ‘I’m proud to come to this club, it is a part of me, it’s a part of the history that I’m involved in’.”

The Digital, Culture, Media and Sport (DCMS) report into the Azeem Rafiq case, which was published last Friday (14), said the government should limit public funding if there was no “continuous, demonstrable progress” on eradicating “deep-seated racism”.

Katwala disagreed with the idea that an overhaul in the boardroom or top management will bring about the change required to make the game more inclusive.

“It’s not about a complete change of management – I think that’s almost ducking out of the issue. I mean, obviously, if there’s a very toxic culture that has been created, you know, then you need to have a change at the top,” he said.

“Because the thing that makes it a tickbox exercise, the sense that this is all compliance, put in place the right reporting schemes, and then say, it’s all done.

“What we missing is a positive vision about what success looks like. And the positive version is inclusion, where diversity becomes a norm. So, if it’s half the people are women, that becomes normal, not exceptional.

“We’re talking about one in six people in our country being black, Asian, or mixed race. So you want a normal dressing room, a normal boardroom to have the right levels of diversity.

“In football, you’ve got enormous diversity on the pitch and no diversity in most boardrooms. And so there’s obviously a barrier there. But I think if people say, ‘it’s time for us to get out of the way and let the people know about this takeover,’ you’re losing what the responsibility is, which is to have these institutions, these centres of power, cultural power in our society has to be equally open. Not just ethnic diversity, [but] also class diversity, sexuality and gender.”

Buttler suggested an independent body to look into racism in cricket, like Ofsted in education. But he wanted the body to not be “accountable” to the ECB.

“So it needs to be somebody who is not held accountable by the ECB and is not employed by the ECB to go out there and actually look with fresh eyes and with elements of good practice in their back pocket, to actually give advice.