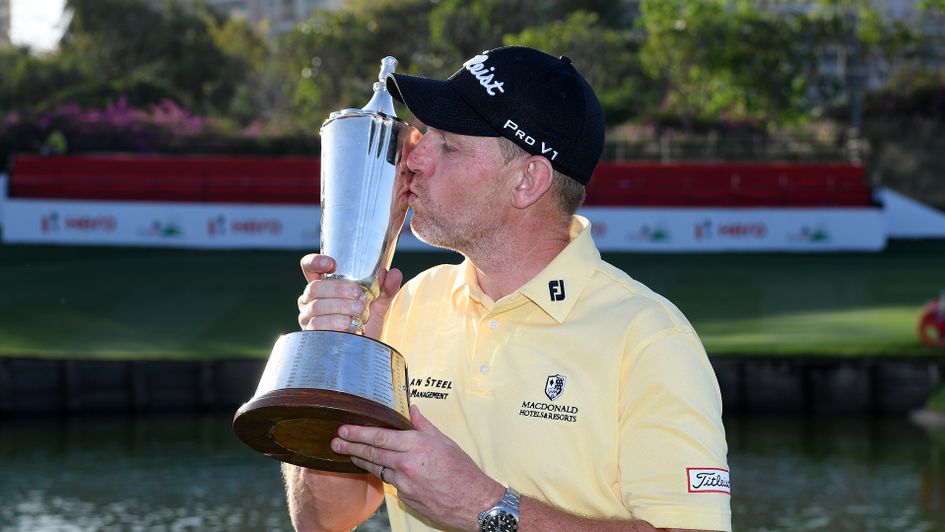 Scotland’s Stephen Gallacher claimed a stunning one-shot victory at the Indian Open on Sunday and the “special” win came with his son by his side as caddy.

Gallacher, 44, shot 71 to finish at nine-under 279 and edged out Masahiro Kawamura of Japan to clinch his first European Tour title in five years at the DLF course in Gurgaon.

Gallacher, who shared the first round lead but started the final day three shots behind leader Julian Suri, birdied three of his last four holes to come up trumps in the event co-sanctioned by the Asian and European Tour.

“It was great to have my son, Jack, on the bag and this being Mother’s Day (in Scotland) as well makes it even more special,” said a delighted Gallacher.

“I have always loved coming to India, I love my curries and to have my son, Jack, on the bag for the win was special.

“Last year I played in the final group with Matt Wallace and I enjoyed and I was seventh, so it felt great to get this Trophy this time around,” Gallacher, who was a member of Europe’s winning Ryder Cup team in 2014, added.

The Scot, who last won in 2014 in Dubai, overcame a major setback after a quadruple bogey eight on the seventh hole on Sunday.

“I thought, ‘just hang in there’. When I birdied 15 I saw that Julian Suri had come back and then when I got to the 16th green I was tied for the lead,” he said.

“I just tried to finish as strong as I could and I did that. Thankfully it was enough.”

Spaniard Jorge Campillo (67) was third and American Suri, who had led by three after 12 holes, slipped in the 14th to finish alongside South African Christiaan Bezuidenhout at six under.

Rashid Khan and S. Chikkarangappa finished in a tie for 10th and were the best Indians among the eight who made the cut.

Asian Tour champion Shubhankar Sharma put two balls into the water on eighth to shoot 75 and ended even par 288 for the week and was tied 27th.