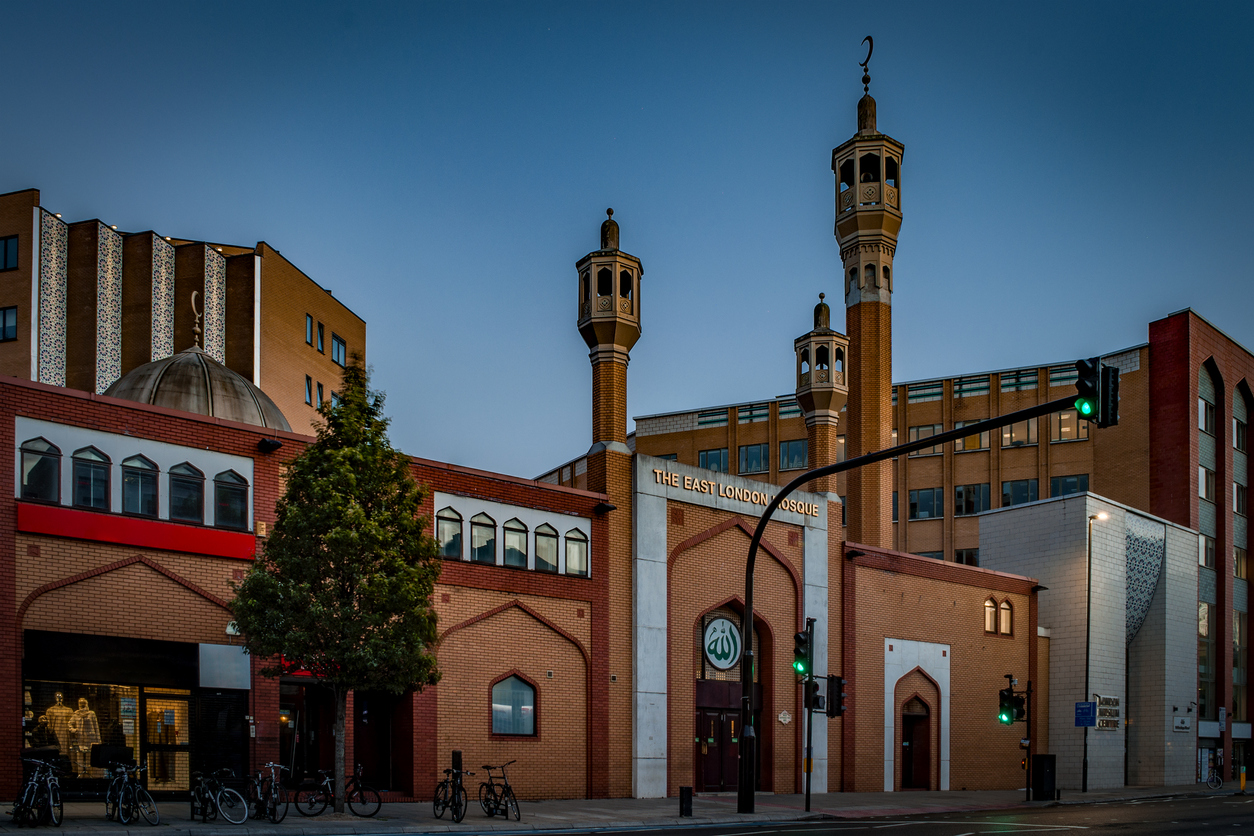 The East London Mosque and the London Muslim Center just before sunset during the holy month of Ramadan in England, UK. (File photo: iStock)

AT a time when Muslims in the UK have been perturbed by rumours about cremation of Covid-19 victims, the East London Mosque (ELM) has offered some solace to community members by setting up an emergency mortuary at Tower Hamlets.

The mosque has converted railway arches, earlier used as a parking space, into a temporary morgue with metal racks that can hold 24 bodies.

It also has a facility for washing rituals (ghusl) that can accommodate five people while maintaining social distancing norms. Considering infection risks, however, the dry cleansing ritual (tayammum) is being encouraged now.

What fuelled worries among the community was the surging death rate, which led to overwhelming of funeral services and cemeteries.

However, Asad Jaman, head of assets and facilities at ELM, said the situation was “not as bad now as it was a couple of weeks ago”.

Jaman hoped the Covid-19 death toll would gradually decrease. “But we are ready if we are needed,” he said.

The ELM, in a statement, added: “We are determined to serve our community the best we can in times of strife.”

WhatsApp fake news and rumours on cremations had recently stirred the UK’s Muslim community, as it’s against Islamic tenets.

One video that went viral had a man, reportedly working with the Islamic charity Crisis Aid, claiming that 33 bodies of Muslim Covid-19 victims would be cremated due to lack of body bags.

The video, however, was rebuked by the British National Burial Council and Crisis Aid itself.

“We wish to reassure the public that there are no mortuaries in London with 33 Muslim bodies about to be cremated,” said Crisis Aid, asking community members to not to share the distress-causing video.

The confusion over last rites of coronavirus victims had caused confusion and anguish in several countries.

China had ordered cremation even as the World Health Organization allowed burial of people who succumbed to Covid-19.

In India, though there was initial lack of clarity, the Union government permitted burials based on WHO guidelines.

In the US, too, the Centre for Disease Control and Prevention stated that bodies could be either cremated or buried as per the family’s wishes.

More recently, in Sri Lanka the issue turned into a communal flashpoint as the government made cremation mandatory.

The Muslim Council of Sri Lanka alleged that the decision was part of “a racist agenda of extremist Buddhist forces that seem to hold the government to ransom”.

In the UK, a coronavirus legislation had been amended in March to ensure religious beliefs were not violated.

The initial bill had raised caused resentment – especially among Muslims and Jews – over powers that would allow authorities to cremate bodies if burial places were overwhelmed.

Subsequently, the ELM – one of Europe’s largest mosques – quickly raised an emergency fund to set up its own mortuary in Town Hamlets to ease funeral pressures.

The mosque received over £80,000 as donations in three weeks. Besides the temporary morgue, money was set aside for additional grave diggers, volunteers’ expenses, transportation charges and buying personal protective equipment.

“May Allah bless all those brother and sisters who responded so generously to the emergency appeal, making it possible to maintain the dignity of Islamic burials for our dearly departed,” said the ELM in a statement.

The mortuary is being operated by Haji Taslim Funerals, UK’s oldest Muslim funeral service. It has over 35 trained volunteers, said Jaman, adding that other funeral services also could use avail the facility.

The ELM said: “This is just one of the many vital services we’re trying to keep going during this difficult time. Our advice and counselling sessions are still available by phone, and we have been making regular food bank and medicine deliveries from the start of the lockdown.

In this blessed month of Ramadan, we’re already delivering hundreds of Iftar meals to the elderly, vulnerable, and to NHS staff who are on duty in the late evening.”