The royal engaged in various activities at the school, including driving robots after he was given a demonstration of VEX Robotics in which the school has accomplished feats. 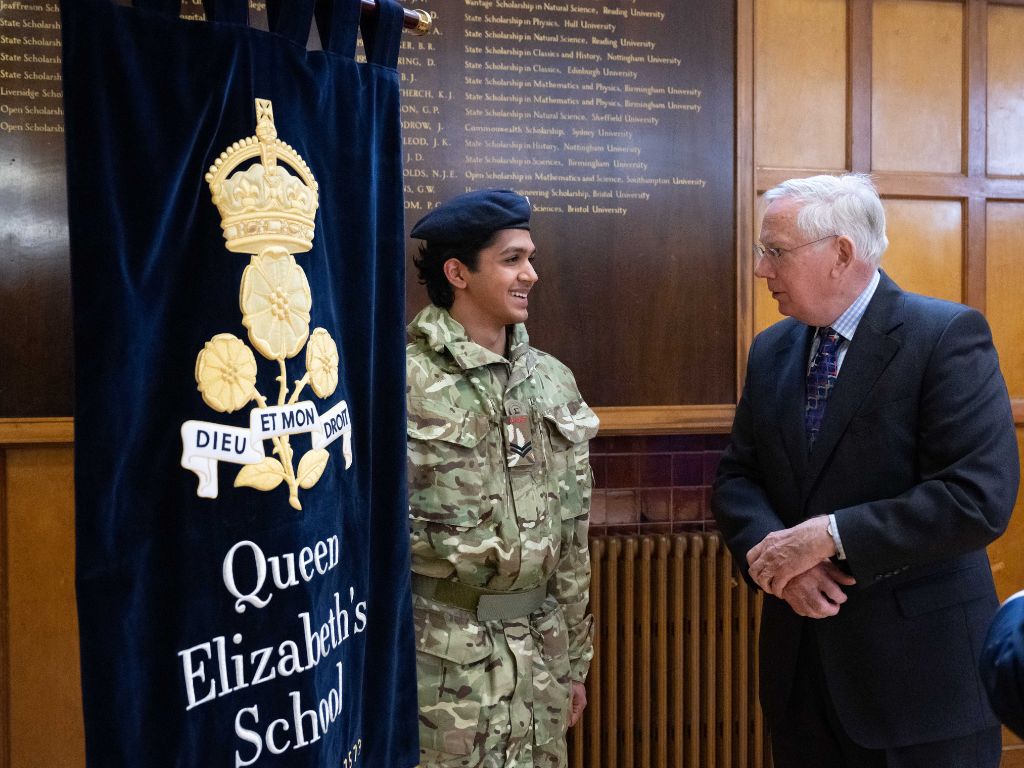 HRH The Duke of Gloucester speaks to a CCF member at Queen Elizabeth’s School, Barnet, on November 29, 2022. (Picture: Eleanor Bentall)
Follow Us

His Royal Highness (HRH) The Duke of Gloucester on Tuesday (29) visited Queen Elizabeth’s School or QE, Barnet, as the reigning Sunday Times State Secondary School of the Year prepares to celebrate its 450th anniversary in early 2023.

While members of the school’s Combined Cadet Force (CCF) flanked the main entrance, the senior rugby team provided a sporting backdrop as the Duke arrived. During his visit, he marked the anniversary by planting an oak tree and by presenting a specially embroidered banner to headmaster Neil Enright.

During the royal visit which had an eye to the future as well as the past, the Duke was given a demonstration of VEX Robotics and he even tried out driving the robots himself.

It may be mentioned here that the QE is a multi-time UK champion and was the first UK school to win a world championship title in robotics.

The Duke came to QE almost exactly 90 years after another royal visit, by HRH The Prince George, Duke of Kent, who opened the new buildings – still in use as the QE’s main building – following the School’s relocation from its historic Tudor Hall site in Wood Street, Barnet.

Following the visit, Enright said, “It was a tremendous honour and my great pleasure to welcome HRH The Duke of Gloucester today. With the anniversary fast approaching, there was much to show him, including the School’s original 1573 Charter signed by Elizabeth I, our Ties through Time installation of 232 School photographs from the 1880s until comparatively modern times, and, to bring things right up to date, the robots and our new music building, opened in May.

“The Duke showed a keen interest in everything, and I know our roboteers will be especially delighted that he was brave enough to try his hand at the controls of two of their creations.”

Earlier in the day, the Duke was presented to the headmaster by Martin Russell, representative deputy lieutenant of the London Borough of Barnet and a former QE parent.

Thereafter, he was introduced to:

The Duke was shown the charter and Royal Seal, together with original artefacts from the 1932 royal visit drawn from the school’s archives. The materials were introduced by Jenni Blackford, curator of QE Collections and head of library services, and two teenage boys involved in the work with the archives — Ishaan Mehta and Gabriel Gulliford.

The headmaster then gave a formal welcome to the Duke in front of 100 selected pupils in the main school hall.

“Your Royal Highness, it is my honour and privilege to offer you the warmest welcome on behalf of the Elizabethan community…2022 has been a year full of accomplishment at the School. We have had our status as an outstanding school confirmed by Ofsted, been named State Secondary School of the Year by The Sunday Times, and opened The Friends’ Recital Hall and music rooms – the latest enhancement to our campus, built from the generosity of our school community. You could say it has been our annus mirabilis,” he said.

The QE’s Senior Barbershop group sang the hymn ‘Abide with Me’ while the new school banner was brought into the hall by a representative of the CCF. Commissioned in advance of the 450th anniversary service being held in Westminster Abbey on March 24, 2023, the banner was passed to the Duke, who presented it to the headmaster.

After visiting the ‘Ties through Time’ photographic installation and enjoying the robotics in the School’s Conference Centre, the royal party headed to the new music building to watch rehearsals for a winter concert under the watchful eye of director of music Ruth Partington.

The Duke thereafter planted the anniversary oak tree. It is intended that the tree, which has been marked with a commemorative plaque, will come into full leaf for the first time at the school in the spring of 2023.

Yassa read a short extract from the wording of a new anthem composed for the anniversary year by internationally renowned composer, Howard Goodall, which is to receive its debut performance in Westminster Abbey in March, “Let us fill this place with hope. Face fate and fortune in our stride. That like an oak, we draw our strength from ancient roots spread deep and wide. From ancient roots spread deep and wide.”

Pupil representatives from the school’s Eco Network and its six Houses placed soil at the base of the tree, with the Duke invited to complete the process.