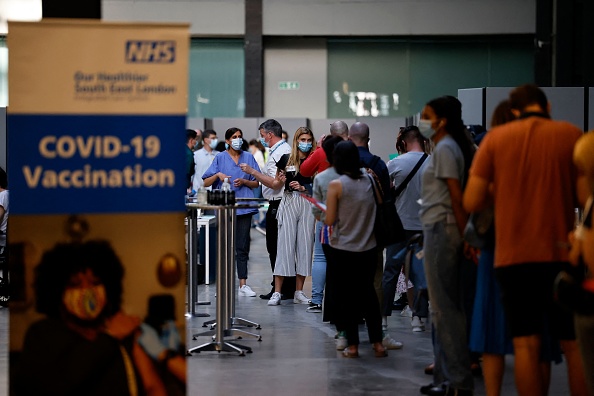 Members of the public queue to receive the Pfizer-BioNTech Covid-19 vaccine in the Turbine Hall at a temporary Covid-19 vaccine centre at the Tate Modern in central London on July 16, 2021. (Photo by Tolga Akmen / AFP) via Getty Images)
Follow Us

BRITONS, who are fully-vaccinated are three times less likely to catch Covid-19  than those who are still unvaccinated, a new  coronavirus prevalence study found on Wednesday (4).

Based on the swab tests carried out on 98,233 volunteers between June 24 and July 12,  a REACT study by Imperial College London found that double vaccinated people are less likely to pass on the virus to others while unvaccinated people were three times more likely than fully vaccinated people to test positive for Covid-19.

Of the 98,233 swabs taken, 527 people were tested positive with the highest number of infections seen in London.

“We’re looking at effectiveness against infection amongst a random sample of the general population, which includes asymptomatic individuals,” Imperial epidemiologist Paul Elliot, who leads the study, said, adding that even those who had symptoms in the study might not have got a test otherwise.

The study also found that the link between infections and hospitalisations, which had previously weakened, had started to reconverge, a move which coincides with the spread of Delta among younger people who may not be fully vaccinated.

The latest survey, conducted between June 24 and July 12, covers the time ahead of a peak in daily reported infections on July 17, and found that the rise was fuelled by spread in younger people who accounted for 50 per cent of all infections, despite being just 25 per cent of the UK population

“We’ve shown that prior to the recent dip, young people were driving the infections,” Riley said.

“These data support the idea that there is uncertainty about what might happen in September when schools return and we have increased indoor mixing, because of the patterns of infection that we saw driving the growth.”

Latest data shows that one in 160 people now have the virus across England, as compared to one in 63 people at the start of the year. So far in the UK over 46.8 million Brits have had a first dose of a vaccine, with 38.5 million also having had a second.