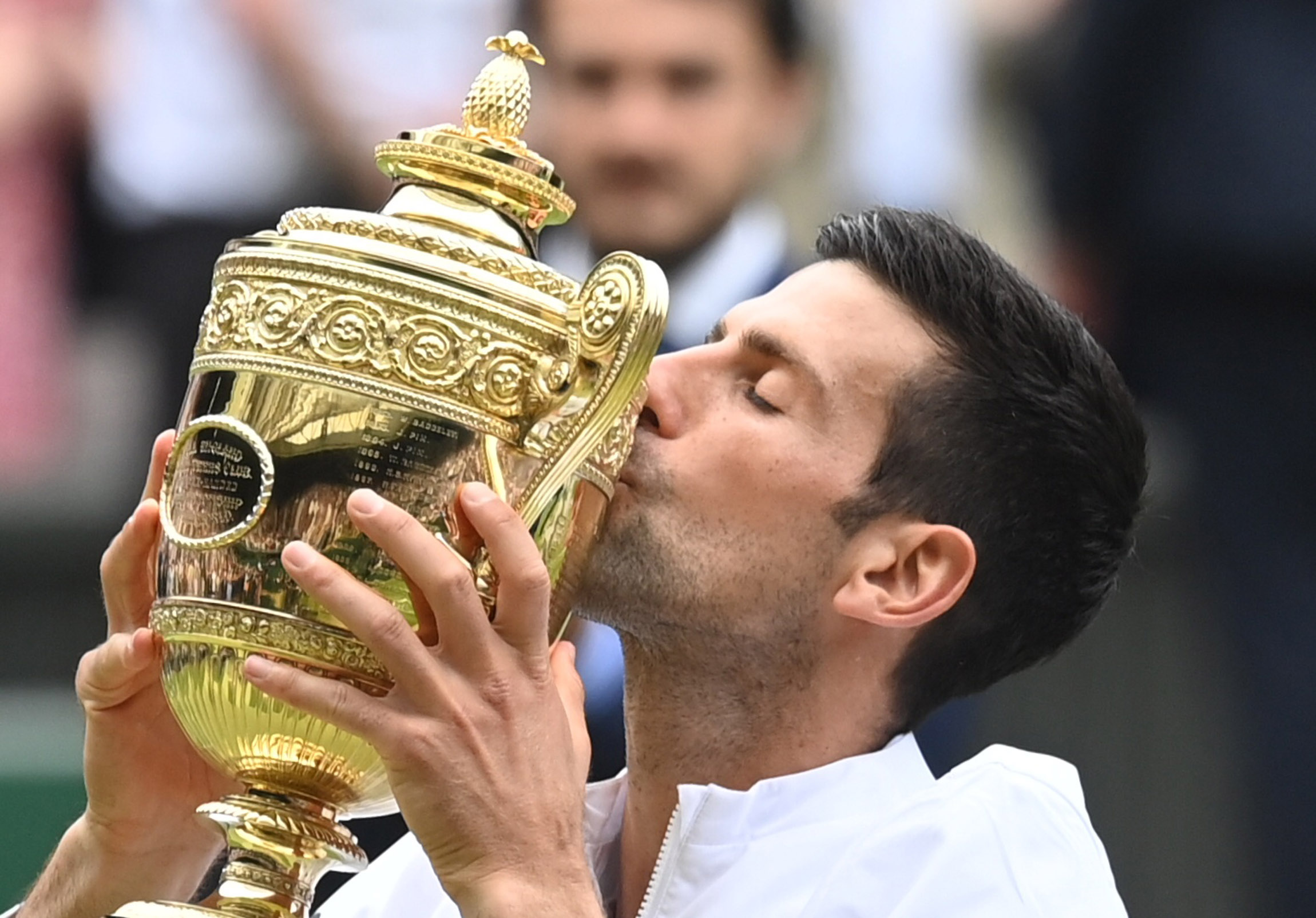 Novak Djokovic celebrates with the trophy after winning the 2021 Wimbledon final. (REUTERS/Toby Melville)
Follow Us

His win also put him three-quarters of the way to the first calendar Grand Slam of all four majors since 1969.

A sixth victory at the All England Club for Djokovic, who was playing in his 30th final at the Slams, added to his nine Australian Opens, two Roland Garros titles as well as three at the US Open.

Should he win a fourth title in New York in September, he will become just the third man in history after Don Budge (1938) and Rod Laver (1962 and 1969) to complete the calendar Grand Slam.

“It was more than a battle. He is a true Italian hammer I felt it on my skin,” said Djokovic of Berrettini.

“It means none of us three will stop. Roger and Rafa are legends they are the reason I am where I am today.”

The Serb also now has 85 career titles while he has become the first man to break the $150 million prize money barrier.

A gold medal at the Tokyo Olympics could give him the first ever Golden Grand Slam by a male player.

Djokovic overcame a nervy start to break for 3-1, which he stretched to 5-2.

He even had a set point in a marathon eighth game which the Italian saved after eight deuces.

Reinvigorated, he broke Djokovic when he served for the set and then dominated the tiebreaker which he sealed with his fourth ace of the contest.

The top seed stormed to a 5-1 lead in the second set on the back of a double break.

Berrettini, bidding to be Italy’s first men’s Grand Slam winner since Adriano Panatta at the 1976 French Open, clawed his way back to 4-5, saving three set points, but Djokovic this time served it out for a set apiece.

Djokovic struck first again for a 2-1 lead in the third set and fought off three break points in the sixth game, a show of defiance which brought watching Hollywood star Tom Cruise to his feet.

That was Berrettini’s last chance of the set as Djokovic served it out in the 10th game.

A weary Berrettini then served up a double fault on break point to hand Djokovic a 4-3 lead in the fourth set.

Djokovic kept coming, sprinting from the back of the court to pull off a wondrous pick-up and he held on for 5-3.

But he was powerless on the third as Djokovic swept to his place in history.

“Novak is a great champion he is writing history on this court,” said Berrettini.

“It is not the end it is the beginning for me.

“Without my family, friends and team all this would not have been possible so I just say Grazie Grazie.”