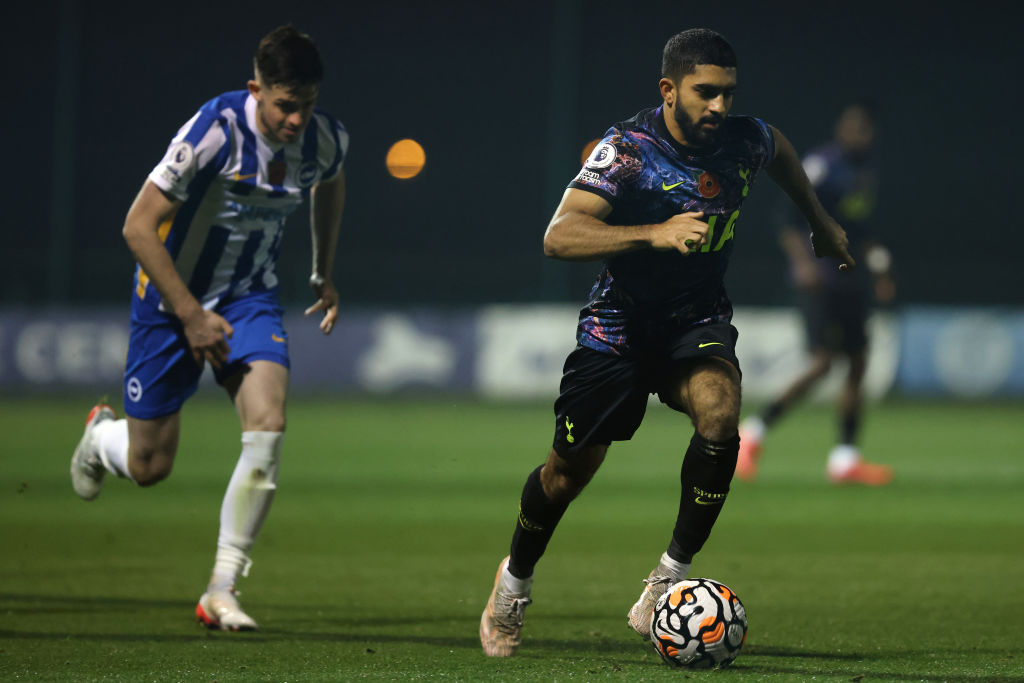 Dilan Markanday of Tottenham attacks during the Premier League 2 match between Brighton & Hove Albion U23 and Tottenham Hotspur U23 at AMEX Elite Performance Centre on November 05, 2021 in Brighton, England. (Photo by Charlie Crowhurst/Getty Images)

LONDONER Dilan Markanday has become a sensation among Asian football fans in the UK. When he took the field for Tottenham Hotspurs in a Europa Conference League match against Vitesse, social media went abuzz about the young midfielder. At 20, Markanday became the first British Asian of Indian heritage to play for the English Premier League Club.

His debut appearance on October 21 lasted for just 15 minutes, but it was a significant moment for the South Asian community who are under-represented in British football, although they have made their presence felt in cricket.

His fan base is also growing in a cricket-crazy India where he hopes to inspire youths with his performance.

The excitement was evident when he joined a video call with members of one of Spurs’ 18 official supporters in India after his debut.

“A lot of family out in India, a lot of people supporting me. It’s been great to receive lots of messages from them and to know they’re watching. And I hope to keep inspiring,” he said, according to a Mail Online report.

“I hope they keep supporting me, following me and hopefully one of those watching will go on and do it themselves”.

Born and brought up in Barnet, Markanday reveals how he, his family and friends were elated after his first appearance for Spurs.

“It was a proud moment, being the first British Asian, it is obviously great. I hope more and more come through and I am the first of many. All my friends and family were very happy for me. I had lots of messages from Twitter, and Instagram was blowing up”.

Beyond the excitement, there lies the reminder that not many British Asians have taken up professional football although they account for seven per cent of the population.

Just 0.25 per cent of professional footballers belong to the community, which according to anti-racism group KIC’s chief Sanjay Bhandari is “the single largest statistical anomaly in English football”.

Markanday, who was nominated for the PL2 player of the month on Monday (8) for having scored 10 goals in 10 Under 23 appearances during the season, hopedd members of his community take a cue from him.

“I hope that lots of British-Asians make that step, believe in themselves, back themselves and can come through and show what they can do,” Mail Online quoted him as saying.