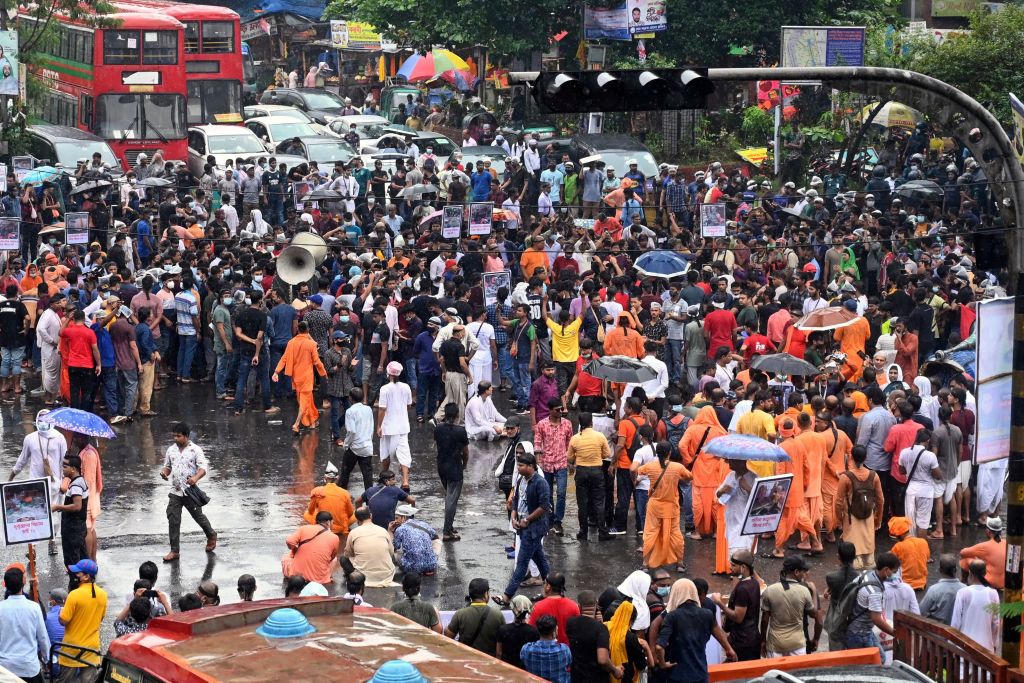 Bangladeshi Hindus gather as they stage a demonstration in Dhaka on October 18, 2021 to protest against the fresh religious violence against Hindus in the country. (Photo by MUNIR UZ ZAMAN/AFP via Getty Images)

AT LEAST 71 cases have been filed in different parts of Bangladesh in connection with the attacks on Hindus and around 450 were arrested for spreading rumours on social media, reports said

As many as 450 people have been arrested in the past five days over the attacks on puja venues, temples, Hindu homes and businesses, and for spreading rumours on social media amid the Durga Puja, reported Dhaka Tribune.

The number of arrests and cases could rise further as operations are underway, assistant inspector general (AIG) Md Kamruzzaman said in a statement.

The police unit is monitoring social media for rumours, according to the statement, which urged the people not to trust anything without fact-checking.

Police warned everyone against conspiracies to create instability by spreading rumours on social media, reports added.

Meanwhile, the Indian minister of state for home affairs Nisith Pramanik on Tuesday (19) condemned the act and said that it is a very serious issue and if required the Indian government will discuss the matter with its counterpart.

Hundreds of people protested in Bangladesh’s capital Dhaka on Monday (18) calling for an end to religious violence that has gripped the country for four days.

The violence began last Friday (15), when hundreds of Muslims protested in the southeastern Noakhali district over an allegedly blasphemous incident.

“There is some confusion about whether they died due to the unlawful assembly, or otherwise,” Islam said, adding that police are investigating the deaths. “They (the protestors) were miscreants, actually, that is all we can say.”

Protests began last Wednesday (13) after footage emerged of a Qu’ran being placed on the knee of a Hindu god during celebrations for the Hindu festival Durga Puja. Hindus make up around 10 per cent of the Muslim-majority country’s population.

More than 200 protesters attacked a temple where members of the Hindu community were preparing to perform the last rites of the 10-day festival, local police station chief Shah Imran told reporters.

The attackers beat and stabbed to death an executive member of the temple committee, he said.

Anti-Hindu violence spread to more than a dozen districts across Bangladesh in recent days after footage emerged on social media of the Qu’ran incident.

At least four people were killed late last Wednesday when police opened fire on a crowd of around 500 people attacking a Hindu temple in Hajiganj, one of several towns hit by the disturbances.

At least 150 Hindus were injured across the country, community leader Gobinda Chandra Pramanik said, and at least 80 makeshift temples had been attacked. Authorities did not confirm the figures.

Last Friday violence broke out in the capital Dhaka and Chittagong, prompting police to fire tear gas and rubber bullets at thousands of brick-throwing Muslim protesters.

High-speed mobile phone internet services were shut down in an apparent bid to prevent the violence from spreading.