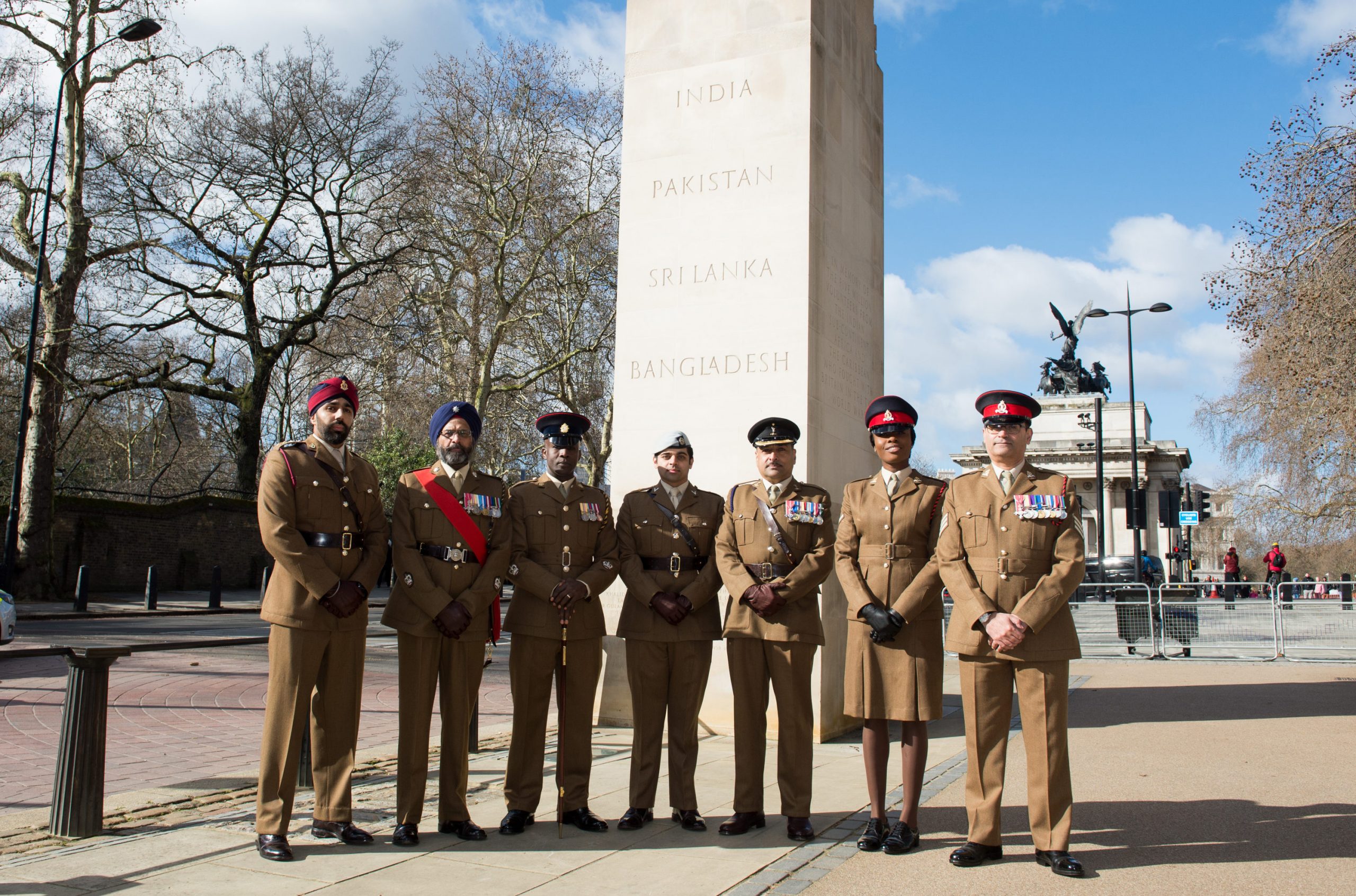 IT’S coming up to 23 years since a sprightly 22-year-old Warrant Officer (Grade 2) Saheed Khan joined the ranks of the British Army, wide-eyed and eager to see what adventures Army life had in store for him.

After holding a variety of different positions, which he describes as “one of the best perks” of the Army, WO2 Khan is now playing an important role as part of the Army Engagement Group (AEG), which tours the country engaging with the public to give them a greater understanding of the British Army and how it contributes to society.

“I’ve had a really interesting and varied career,” says WO2 Khan. “I’ve served with a multitude of dif­ferent units. I have worked with one star Headquar­ters, different infantry teams, Army aviation and in the Ministry of Defence. I’ve been very fortunate, I’ve had a brilliant career.

“And now I’m doing the best job ever, which is Army Engagement, speaking to people all over the country from all walks of life and explaining to them what the Army does.”

The AEG is a complex network of groups working to communicate the Army’s dedicated service to the British public. 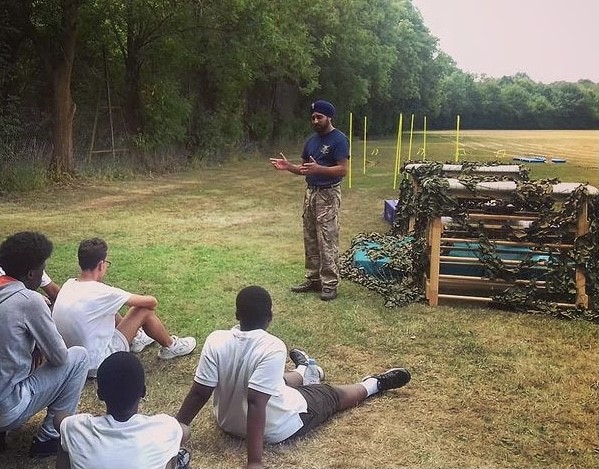 WO2 Khan says it’s important the Army makes the effort to engage with people from all backgrounds as there are still many misconceptions about the or­ganisation. “It’s important we go out and meet peo­ple and provide them with an understanding of what their Army actually does on their behalf. We are representative of society, so it’s important we stay connected with society and address some of the doubts they may have.

“Some misconceptions I have come across are things like can women join the Army? I’m Muslim, can I join the army? Or I’m a Hindu, will you cater for my dietary requirements? Well, yes, women and members of the LGBT community can join the Army. Yes, we’ve got specific Hindu rations, we’ve got halal rations, we’ve got a variety of vegetarian rations. So, we do cater for people from all faiths and back­grounds. And the Army is always evolving to meet the needs of its recruits and soldiers.”

The devout Muslim describes the Army as a “great employer” which looks after its people.

“I’ll give you an example – how many organisa­tions will pay to send their Muslim employees on Umrah and Hajj? (the Islamic pilgrimage to Makkah and Madinah). I was one of the first to go to Umrah and subsequently, it’s been happening every year. I think that just goes to show what a diverse and inclu­sive organisation the Army is.”

As part of the diversity engagement team, WO2 Khan visits south Asian communities in places such as mosques, temples, gurdwaras and community centres. He says that the feedback he receives is al­ways positive.

“People often say, ‘my granddad or my dad used to serve in the India/Pakistan Army’. They hold the Army in such high regard in those countries and I want them to do the same with the British Army. For example, we have around 600 Muslim military personnel and we want this number to increase, and the same goes for other faiths. The contribution people make with different languages, different cultures and different faiths is invaluable in the military.”

WO2 Khan is aware that south Asian families are still keen on their children going into professions such as law, engineering and medicine rather than becoming soldiers.

However, what many people don’t know is that the Army has more than a hundred of the most diverse career paths – including lawyers, engineers and doc­tors. “You can be a doctor in the Royal Army Medical Corps, you could be an engineer in the Royal Engi­neers or you could be a lawyer in the Army legal services,” explains WO2 Khan.

The Army also has an extensive apprenticeships programme which includes courses in public ser­vices and health; engineering; telecommunications; animal care; I.T Logistics; construction; business administration. Students can then go on to complete bachelors and masters degrees with the Army.

The Army’s Youth Outreach and Youth STEM En­gagement teams go into schools, colleges and youth centres to make students aware of the incredible opportunities available to them through the Army. There are many engineers, electricians, biomedical scientists, doctors, pharmacists, pilots and many more professionals who have come through the Ar­my. “The Army Youth Outreach team do an abso­lutely wonderful job building relationships with young people. They deliver an interactive presenta­tion which explores opportunities available in the Army and highlights the emphasis they place on personal development.

“The team also delivers various fun, practical ac­tivities which young people partake in, such as ‘a village has been flooded? How are you going to move people to safety?’ Or they’ll be given ropes, barrels, and planks and be told, ‘these are shark infested waters, how will you extract yourself and your team out from this area?’ The STEM-based activities are run by Army technicians and are aimed at develop­ing communication skills, fostering teamwork and growing self-confidence.”

WO2 Khan adds: “When I speak to young people, their reaction is usually ‘wow, so I could actually do this job in the Army and be trained to do it from a young age’. And quite often, you get their parents say­ing, ‘God, I wish I knew this earlier, because I would have done it myself!’” 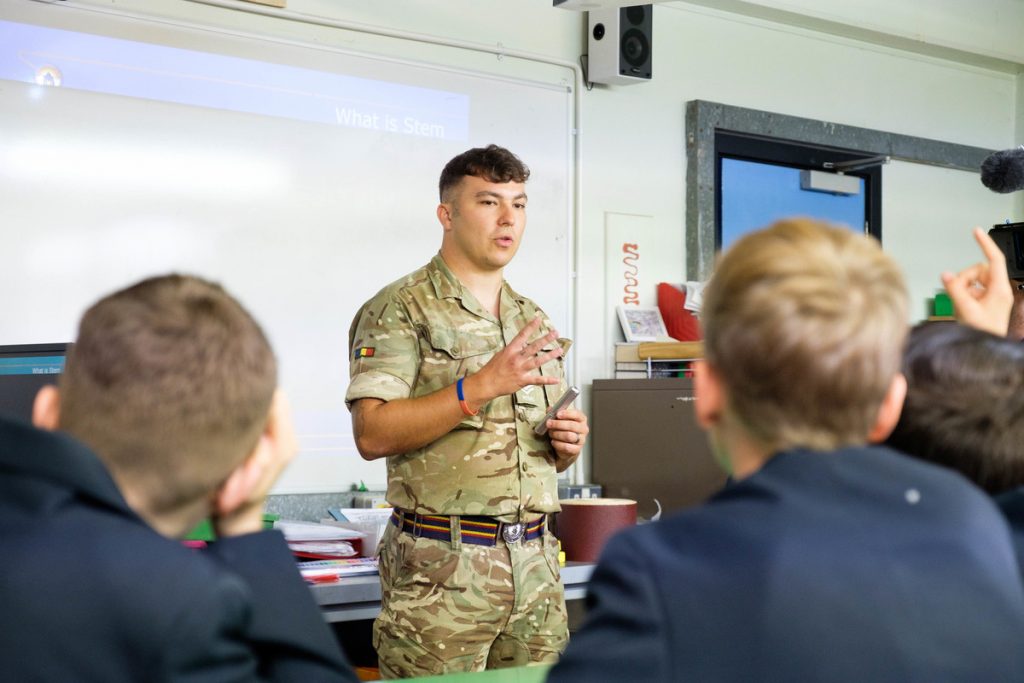 WO2 Khan also talks to the young people about the incredible life the Army has enabled him to live.

“I have had the most fantastic 23 years in the Army. I have had so many different postings and roles which has been so fulfilling. I travelled all over the world on Army assignments. I’ve worked all over England. I spent four or five years in Germany. I have worked in Northern Ireland, where there is a very strong Muslim community, which was very interesting. My twin daughters, who are now 16, were born in Northern Ireland. My sons, one was born in Germany and one in York. So the Army has allowed me and my family to experience lots of different cultures.”

Now, as he puts it, the 45-year-old is in the twilight of his career. But the one message he would like to give to the public is for them to engage with the Ar­my. “I always say, you don’t have to join the Army, but at least find out about what the Army does be­cause we are your British Army. Find out about the opportunities available that you can take advantage of, it could change your life as it has done mine.”