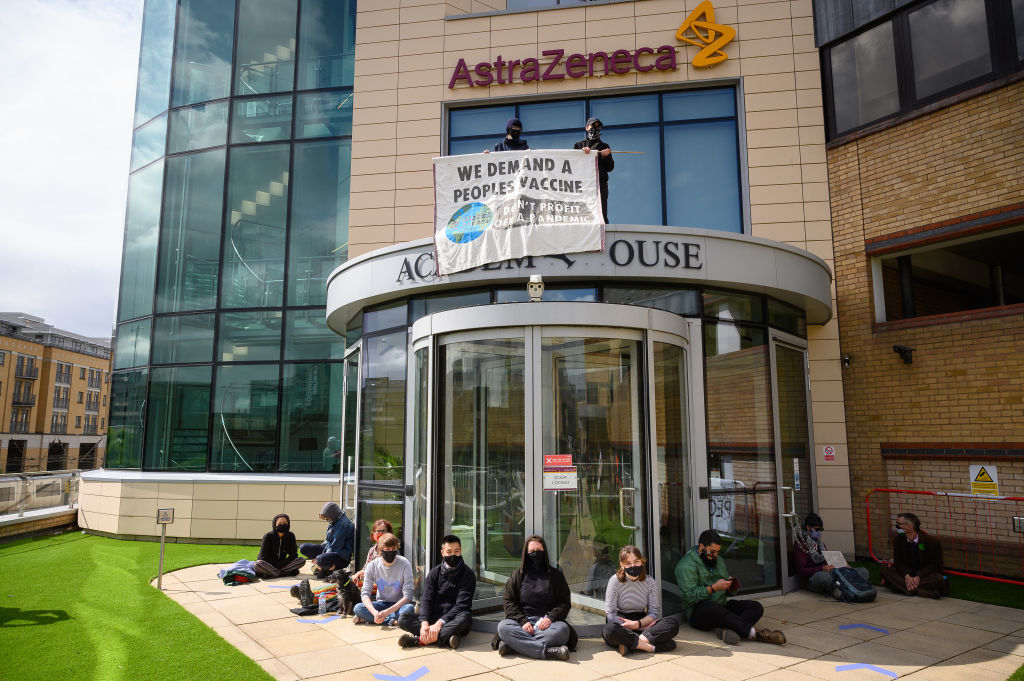 Members of a group called “The People’s Vaccine” protest outside the AstraZeneca headquarters as they call for the pharmaceutical company to make the science behind the COVID-19 vaccine available to all, on May 11, 2021 in Cambridge, England. (Photo by Leon Neal/Getty Images)

BRITAIN is seeking constructive engagement with the US and other World Trade Organization members on the issue of IP waivers for Covid-19 vaccines, a government spokesman said after pressure from charities to back US proposals.

US president Joe Biden last week threw his support behind waiving intellectual property rights for Covid-19 vaccines in a sharp reversal of the previous US position.

Britain has not joined the US in its position, but has emphasised its own efforts to improve access to Covid-19 vaccines, and the spokesman suggested that an IP waiver alone would not be sufficient to help the situation.

“We are engaging with the US and other WTO members constructively on the TRIPS waiver issue, but we need to act now to expand production and distribution worldwide,” the government spokesman said.

“Any negotiations in the WTO on a waiver will require unanimous support, which could take a significant amount of time. So while we will constructively engage in the IP discussions, we must continue to push ahead with action now including voluntary licensing agreements for vaccines.”

Britain has promised to donate surplus vaccines to other countries when it is able to, but says it has no spare shots to give at the moment.

Around 35 million people have received at least one dose of a Covid-19 vaccine in Britain, about two-thirds of the adult population. Britain has ordered 517 million doses of vaccine in all.

Hundreds of charities, academics and politicians this week signed a letter to prime minister Boris Johnson calling him to back Biden’s move, and on Tuesday protests were planned to coincide with the annual general meeting of AstraZeneca, which is manufacturing the vaccine candidate developed by Oxford University.

AstraZeneca has pledged to not profit from sales of the vaccine during the Covid-19 pandemic.