‘Bridgerton’ Stars dazzle on the red carpet at Season 2 Premiere 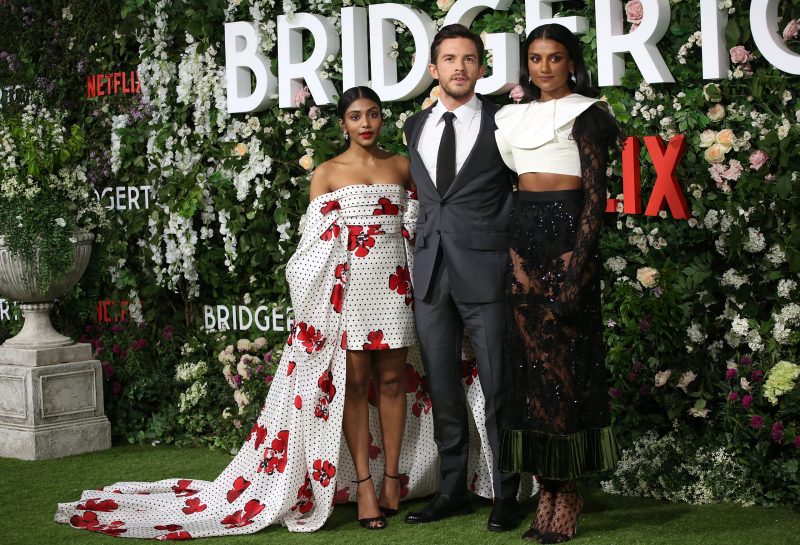 The world premiere event for Bridgerton Season 2 was held on Tuesday at the Tate Modern in London. The star-studded event saw the presence of the much-anticipated show’s lead stars, including Simone Ashley and Charithra Chandran. The duo posed together with Jonathan Bailey on the red carpet.

The lead stars of the show gathered at the event to watch the first showing of the period drama, which is set to start streaming on Netflix on March 25. They walked the red-carpet event looking drop-dead gorgeous. It was a treat to see Jonathan Bailey, Simone Ashley, Charithra Chandran having a gala time as they posed together.

Simone, 26, slid into a structured white crop top with black lace sleeves and a matching skirt. It also featured tights and a pair of strappy black heels.

Charithra Chandran, on the other hand, rocked a bold white strapless dress with billowing sleeves and a red floral print pattern.

The successful Netflix drama follows the Bridgerton siblings as they try to find love in Regency-era England. Ahead of the release of Season 2, the world premiere event for Bridgerton saw everyone in attendance including producer Shonda Rhimes, showrunner Chris Van Dusen, and executive producer Betsy Beer.

The second season of Bridgerton introduces audiences to the new characters of Kate and Edwina Sharma played by Simone Ashley and Charithra Chandan respectively who will play a key part as Daphne Bridgerton’s (Phoebe Dynevor) brother Anthony Bridgerton (Jonathan Bailey) kick-starts his search to find himself the perfect suitor.

Nicola Coughlan, who plays Penelope Featherington/Lady Whistledown, and Phoebe Dynevor as Daphe Bridgerton also return to reprise their roles in Season 2. However, both stars were missing from the world premiere event held on Tuesday. Dynevor took to Instagram to explain her absence. She said she had to miss the event as she was busy filming another project.