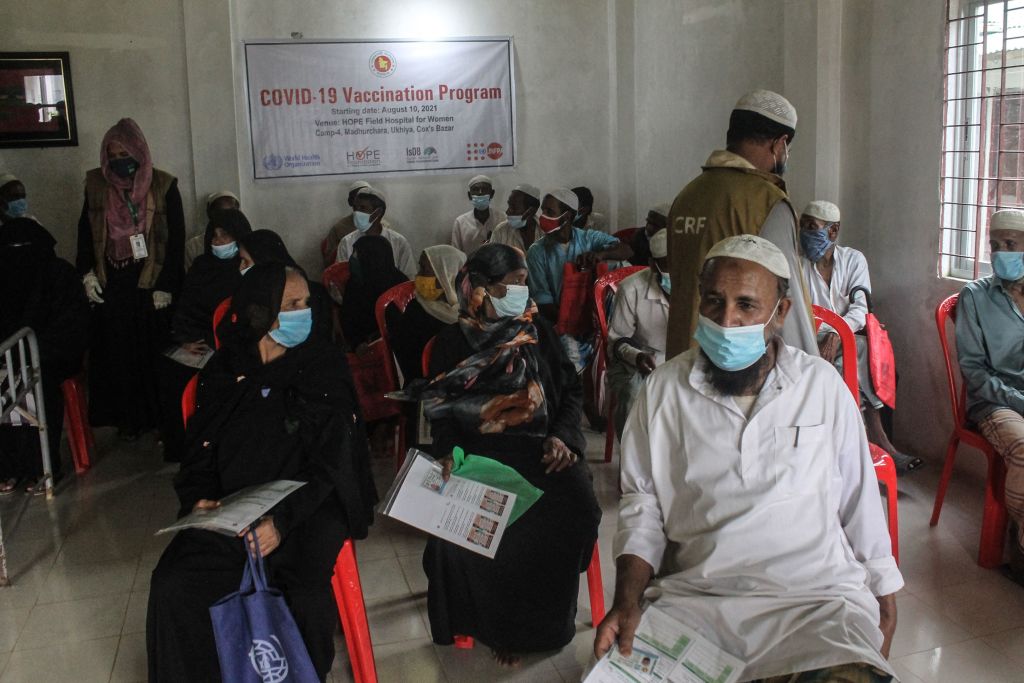 Rohingya refugees wait to receive a dose of a Covid-19 vaccine in Kutupalong refugee camp in Ukhia on August 10, 2021. (Photo by TANBIR MIRAJ/AFP via Getty Images)

Health officials said 2,600 Covid-19 cases and 29 deaths have been recorded in the camps housing some 850,000 Rohingyas.

Officials said they have carried out a “massive vaccination awareness campaign” in the camps with volunteers going door to door to inform the refugees about the importance of getting jabbed.

Shams ud Douza, Bangladesh’s deputy refugee commissioner, said a vaccination drive would also begin this week for the 18,000 Rohingyas controversially relocated to an island in the Bay of Bengal.

Bangladesh has been hit by a major surge in cases in recent months and much of the country of 169 million people is under lockdown, including the Rohingya camps.

The coronavirus has killed nearly 23,000 people and infected some 1.4 million in Bangladesh, most of them in recent months. Some 98 per cent of new infections are from the more transmissible Delta variant first detected in neighbouring India.

“Vaccination of all age groups is the only effective way to stop the virus (from) spreading further among the Rohingya population in the camps,” said Romain Briey, head of the medical charity MSF in Bangladesh.

Most of the Rohingyas in Bangladesh fled an offensive by security forces in neighbouring Myanmar in 2017 and four years later, there remains little prospect of them returning home.

Hrusikesh Harichandan from the International Federation of Red Cross and Red Crescent Societies said the Rohingyas were “living in the shadow of the global vaccine divide”.