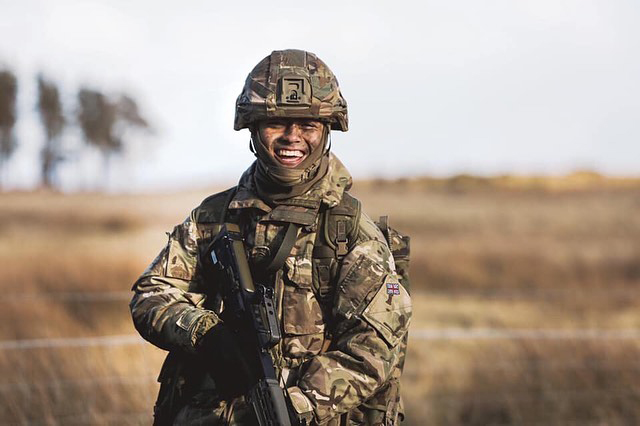 FOR most students, life at university can be about acquiring an academic qualification or two, making friends and enjoying new experiences.

But those looking for a bit more could try the University Officers’ Training Corps (UOTC), an Army Reserve unit which enlists university students who can go on to train as the next generation of army officers, if they so desire.

Students learn valuable skills – to help further their career within the army as well as in civilian employment – and also enjoy sports activities such as canoeing, kayaking, gliding, mountaineering, skiing and sub-aqua diving. There are opportunities to travel abroad, too.

Pebbles Ace-Acquah, 21, a student at the University of Reading, from Kent, said the UOTC had changed her student experience for the better. She told Eastern Eye, “I think UOTC rounds you out in a way that university by itself just doesn’t. You get to know yourself so much more, including how you react under stress, what you’re like as a leader, and your strengths and weaknesses in this regard. At the same time, there are excellent staff members who want to help you develop any way they can.”

Disha Seechurn, 20, from London’s Brunel University, said her confidence improved and she became more disciplined following her time in the UOTC. “Working at events such as Fresher’s Fairs helped to increase my confidence in public speaking and talking to new people,” Seechurn said. “As someone who always used to be late, my punctuality has definitely improved too.”

The UOTC can be a pathway for future army officers as both regulars (full-time) and reserves (part-time). Although there are no requirements to join the Army after graduation, approximately 35-40 per cent of the Regular Army Commissioning course is made up of those who have attended the UOTC.

Gevish Kuma Kheddo, 19, said his goal was to join the services as an engineer, while Ace-Acquah said she was “definitely” considering an armed forces career.

Jordan Berry, 21, from Dorset, said the course helped him improve his skills relating to organisation, planning, time management, self-discipline, communication, leadership, and teamwork. “These (skills) are all transferrable and will have a positive impact in a cadet’s life whatever they go on to do,” he said.

Berry, an economics, politics, and international relations student at Royal Holloway, University of London, said he was still weighing up his options, but insisted there were “lots of different (career) pathways”. He is due to engage with the Army Officer Selection Board (AOSB) in Westbury, which, if successful, will give him a ‘job offer’ to join as a full-time officer after university.

“This offer has an expiry date of five years, so it would be an excellent way of keeping my graduate options open,” he said. “I’m confident that if I joined full time, I would want to attend the Royal Military Academy Sandhurst and commission as an officer.

“However, I am also considering the reserves. The demands of my civilian career would be the determining factor in whether I became an officer or a private.”

As well as providing individuals with valuable training and travel opportunities, participants are also paid for their service based on the time they choose to commit. Seechurn said it was a “big bonus” of the scheme.

“You learn skills for life, and you’re not committed to anything so if it’s not for you, then you can leave at any point,” she said. “You have the opportunity to participate in amazing activities such as ski trips, sailing or diving, while getting paid at the same time.”

All training is designed to fit around the academic calendar, which means that studies will always have priority. “There are no required hours, so attendance is flexible,” Seechurn said.

One of the key themes of the time students spend in the UOTC is ‘Make Friends for Life’. The UOTC conducts social events and cultural activities, such as fancydress balls and formal dinners.

For Ace-Acquah, the friendships from the UOTC were “one of the best things about (the experience)”. In many ways, she said, the relationships had been “more meaningful” than university friendships. “Knowing someone for a year in UOTC can feel like 10 years,” she said. “As you have periods of living with them, and you see them in practically every state – from dressed to the nines for annual dinner to an unwashed mud beast on exercise – you become closer much more quickly.”

Seechurn said she was still in contact with friends from UOTC, even those who had already graduated and left the corps. “The relationships you share are capable of being light-hearted, they lift your mood, particularly during tough times, but can also be personal.”

Ace-Acquah said her experience also helped clear up any previous misconceptions as she learned more about life in the military. “It has broken any preconceived notions I had about women in the army, or what kind of person I was expected to be in order to join as an officer.”

However, Berry acknowledged the experience was perhaps not for everyone, such as those who preferred not to be pushed physically or step out of their comfort zone. “If you thrive in a high-pressure environment, enjoy the outdoors and have a ‘carpe diem’ mentality, it is definitely to be recommended as you will be surrounded by students of a similarly driven mindset,” he said. “I can think of plenty of people I know at university who wouldn’t enjoy it at all – but that’s the beauty of it.”