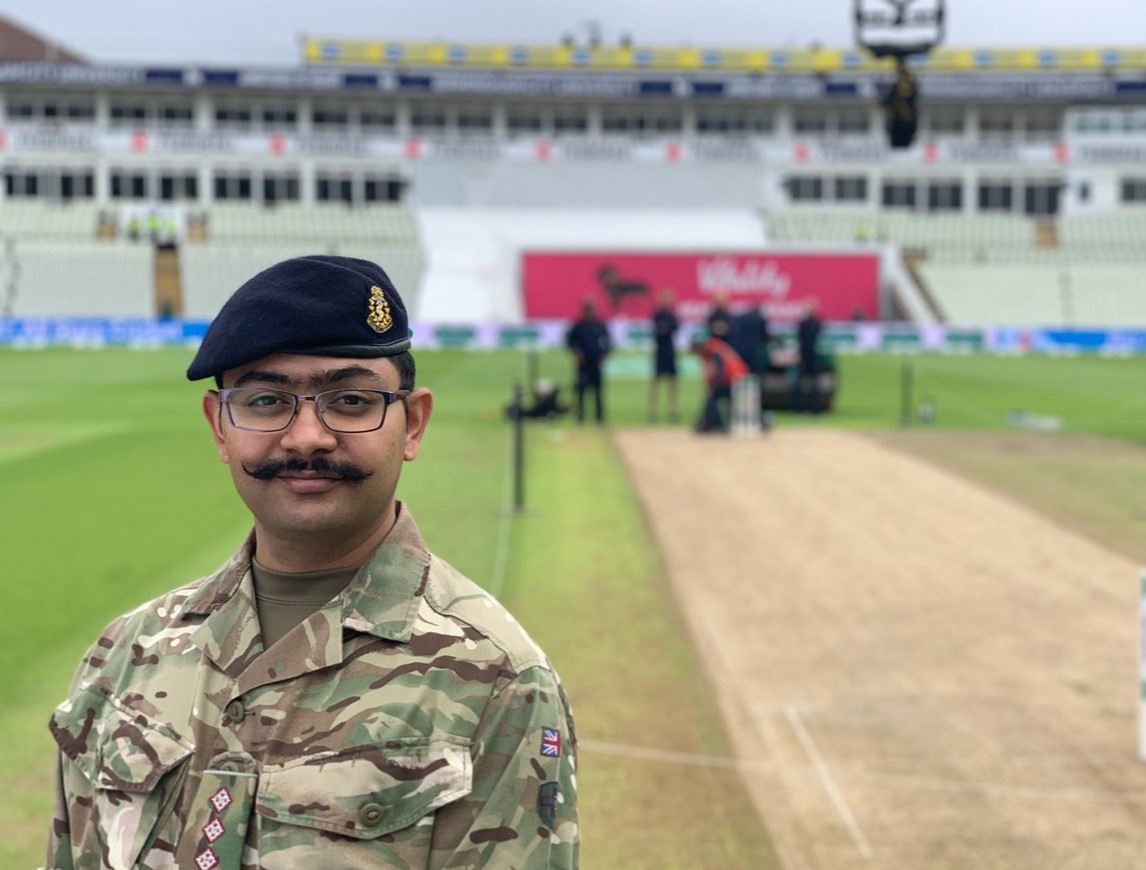 CRUCIAL ROLE: During the Covid-19 crisis, Captain Munish Chauhan has been tasked to help with the Army Recruiting and Initial Training Command (ARITC) Covid-task at Army Training Centre Pirbright (ATC(P))

AN ARMY doctor has reflected on his work during the coronavirus pandemic, emphasising his pride in being able to serve the country through such challenging times.

Captain Munish Chauhan is a medical officer within the Royal Army Medical Corps. However, since the Covid-19 crisis last year, he has seen his role change considerably. The restrictions mean his job operates differently, to ensure he and his patients remain safe.

He has also been tasked to help with the Army Recruiting and Initial Training Command (ARITC) Covid-task at Army Training Centre Pirbright (ATC(P)) in Woking, Surrey. At ATC(P) young people undertake initial basic training to turn them from civilians into soldiers.

Capt Chauhan’s role sees him medically supporting soldiers who are in isolation and looking after personnel as well as carrying out coronavirus testing and maintaining the isolation facility.

Despite the challenges he has faced this year, Captain Chauhan said he feels “humbled” to be helping the UK through the global crisis. “Being able to serve the country in this capacity, I feel really, really proud,” he told Eastern Eye. “The pandemic has proven how we can come together in times of adversity.”

Many of the soldiers at ATC(P) who have the virus are not unwell enough to be sent to hospital – but they also need to be separated from their fellow campmates. It is vital that they are isolated away from other soldiers, so they do not risk spreading the infection to others. This is where Capt Chauhan and his team step in, to help stop the spread and treat anyone who needs medical assistance.

“We have a dedicated building that is only for patients who have either tested positive for Covid or they are showing symptoms,” said Capt Chauhan. “So we separate them from everyone else, as we want to contain it in one place and control it.”

Before becoming a fully qualified soldier or officer, each individual has to go through initial training. It is typically seen as the starting point of their military career. Assisting soldiers at this level has been “humbling”, said Chauhan, who joined the armed forces in 2007.

“Being able to do my duty as an army doctor and support young soldiers in their initial training, which they have to complete to progress within their careers, has been humbling. Indirectly, I feel time spent undergoing initial training has the most impact on their life, so I feel proud to be part of this big thing and supporting somebody’s career.”

As well as working rota-shifts at ATC(P), he is still working as a medical officer. However, the typical procedure of meeting patients face-to-face has changed in light of the pandemic.

Telemedicine has now become the primary triage assessment tool for medics. They have also set up an online system, where patients can be assessed virtually.

Although adapting to a new way of working has been challenging, Capt Chauhan believes that it is the future of medicine. “I don’t think it’s going to go away even after the pandemic is over,” the India-born medic said. “Medicine and online medicine will be the go-to-thing for primary healthcare.”

His wife, Sgt Harpreet Chauhan, is also in the British Army and works as an ITU specialist nurse. She is currently on maternity leave and has not been working throughout the pandemic. They are parents to two young children.

Working on the frontline, Capt Chauhan admitted his concerns about possibly putting his family at risk of contracting the virus. “It’s been a very worrying time because I don’t want to bring anything home to my wife and children,” he said, noting a British Medical Association (BMA) study which found doctors are approximately three times more likely to contract Covid-19 in comparison to a member of the public. “But times have been tough for everyone,” he added. “It’s sad to see this happening around us.”

Despite his concerns to protect his family and his personal health, Capt Chauhan understands he has a role to help those in need. “As a military doctor, I must do all I can to help people – I can’t just be selfish and sit at home and take some time off.

“Patient safety is and will always be my first priority and I want to make sure I’m giving them the attention that they require.”