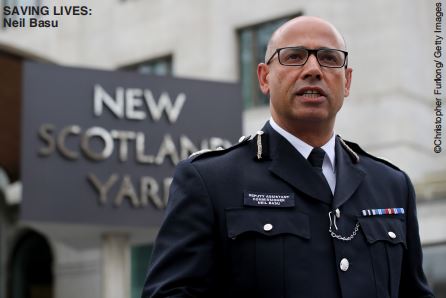 UNLESS Neil Basu chooses to write his memoirs, perhaps one day someone else will write a novel based on his career.

After all, Jeffrey Archer’s bestselling new book, Nothing Ven tured, has been inspired by a real life officer from Scotland Yard. At 51, Basu is now in the third tier of command at the Metropolitan Police, having joined the force at 24 after taking a degree in economics from Nottingham University and solving a great many murder cases along the way.

“I am the son of an Indian immigrant,” he told Eastern Eye. “My dad was a doctor born and raised in Calcutta. He went to school there, qualified as a doctor there, came to this country in 1961; married a white woman, my mother, a Welsh woman who is still alive.”

One novel he has read in the past 12 months is Abir Mukherjee’s detective thriller set in Calcutta in 1919, A Rising Man, which introduces an unlikely partnership between Capt Sam Wyndham of the Imperial Police force and his Cambridge-educated assistant, Sgt Surendranath (“Surrender-not”) Banerjee. “I really loved it,” said Basu.

“I don’t get to read for pleasure very often but I really enjoyed it. I was hoping to get the author to sign it for me. I very much want to read his next book.” Basu has got some catching up to do since Mukherjee has already published two other books in the series – A Necessary Evil and Smoke and