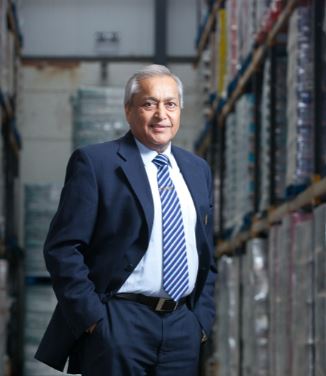 AS the Tory Party’s deputy treasurer and one of its biggest donors, grocery tycoon Rami Ranger cuts a prominent figure across a wide swathe of British life. Currently it’s the field of politics rather than business that occupies the lion’s share of the Sun Mark chairman’s public profile.

With the day-to-day running of his company now in the hands of his son-in-law Harmeet (Sunny) Singh Ahuja, Ranger, who turned 72 in July, has been able to devote an increasing amount of focus to Tory Party affairs, of which the greater participation of British Asians in the upper echelons of politics and the issue of Brexit have been particular preoccupations.

Having helped set up the British-Asian Conservative Link organisation to encourage more Asians to get involved in UK politics, this former Dixons store manager has this year had the satisfaction of seeing the Tory Party make greater and greater strides towards inclusivity.

Even before the formation of Boris Johnson’s four strong BAME (Black, Asian Minority Ethnic) member cabinet in July 2019, Ranger had glowingly described the party as “totally changed” from how it was in the 1980s, with “a lot of Asian MPs, lots of Asian Lords, Asian cabinet ministers – “if you do nothing, you achieve nothing”.

Soon after the announcement of Johnson’s cabinet, including Sajid Javid as Chancellor and Priti Patel as Home Secretary, Ranger, said he was thrilled that a British cabinet “for the first time reflects the makeup of modern Britain”.

Whether the Party’s increasing identification with the UK’s Asian community would be enough to secure Ranger’s continuing wholehearted support if it takes Britain out of Europe without a deal remains to be seen.

In recent years Ranger, whose £200m a year business has won the Queens Award for Enterprise and International Trade a record five consecutive