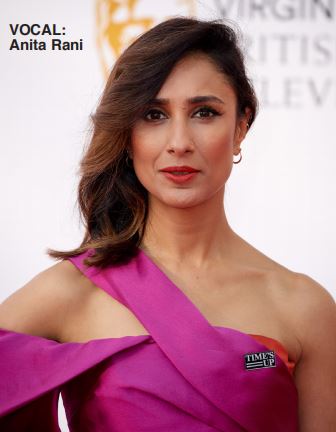 IF you were to ask people in the street to name an Asian woman TV presenter – many would probably cite Anita Rani.

Appearing on the BBC’s Saturday evening hit programme, ‘Strictly come dancing’ helps. She featured in the 2015 edition and reached the semi-final and later went on to host a Strictly tour around Britain.

This year she’s been one of the two leads on the popular BBC prime-time War on Plastic with Hugh and Anita. Hugh being the well-known chef and environmental campaigner Hugh Fearnley-Whittingstall.

Hugh and Rani visit a street in Bristol and see just how much plastic can be ditched in favour of more environmentally friendly materials for household use.

Rani also files reports for The One Show, one of the BBC’s most popular evening magazine programmes.

Her regular gig is with Countryfile, and has been since 2015. The BBC magazine programme covers farming and rural affairs.

Earlier this year, she was back in the news, calling for a greater level of diversity both behind and in front of the camera.

She has been vocal about the issue and has raised her head above the parapet on more than one occasion.

In 2018, she had fronted a popular programme about Bollywood for the BBC – it was a sort of introduction for people who knew very little or next to nothing about the genre or style of popular filmmaking in India.

It turned out that she had suggested she do a similar programme on Hollywood but didn’t get a sympathetic hearing from BBC bosses, prompting her to say: “You’d never think to ask a number of posh white men on TV, why did you get to present shows about train travel in India?” – spiky, from the Bradford lass on the telly, some might say.