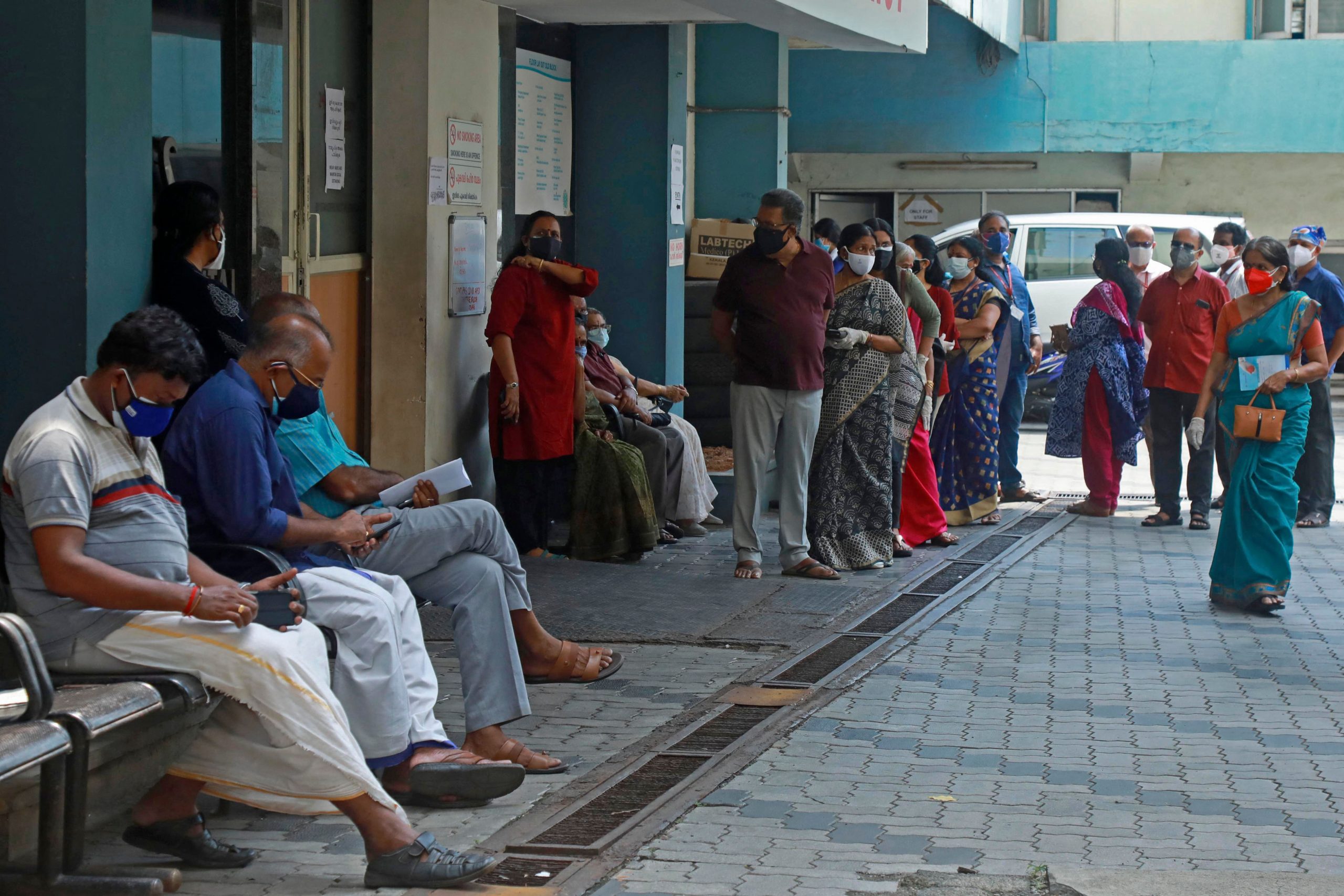 People wait for their turn to get a dose of the Covid-19 coronavirus vaccine at a Covid treatment centre in Kochi on May 7, 2021. (Photo by Arunchandra BOSE / AFP)
Follow Us

As the health worker swabbed the skin on his arm with an alcohol wipe and prepared the syringe, Kartik Biswas felt an overwhelming sense of relief.

He was finally about to receive his first dose of the COVID-19 vaccine, as part of a drive by the southern Indian state of Kerala to inoculate some of the country’s most marginalised people – migrant workers.

It is rare for migrant workers, who make up one-fifth of India’s 100 million workforce, to be specifically targeted for state help.

Yet in recent weeks, officials in the southern coastal state have been taking jabs to work sites, setting up vaccination camps and putting up public health posters in local languages, urging migrant workers to get protected against the virus.

“I was home for a year during the lockdown and I got my job back with great difficulty. If my health suffers now, who will take care of my family? I was determined to get vaccinated,” said Biswas, 44, a supervisor at a construction site.

Repeated lockdowns shuttered industries, leading to millions of job losses, while a brutal second wave in May overwhelmed the health care system in India, the second-worst affected country globally after the United States.

Biswas, who moved to Kerala from Kolkata four years ago, was among 500 workers vaccinated at a three-day camp held at his work site last week by the labour department amid rising cases in Kerala.

“I feel relieved. Five of my six flatmates contracted COVID-19 at the peak of the second wave. I had started trying to get vaccinated ever since but could not,” Biswas told the Thomson Reuters Foundation by telephone.

“Vaccination is critical for us to protect our lives and our future.”

India aims to vaccinate all willing and eligible citizens by the end of the year, but the vaccination drive has been hit by shortages, hesitancy and a digital divide.

Migrant workers were among the worst hit by the pandemic. As many as 11.4 million returned to their home states during lockdown, government data shows, as jobs dried up.

However, most economic activities have resumed as state governments eased restrictions with declining infections. Unemployment rates are gradually dropping, data from an independent think-tank shows.

States like Kerala, a migrant magnet for the past decade, have seen migrants from across India returning to look for jobs in hospitality, factories and at construction sites.

“We have a huge population of migrant workers and they should all be vaccinated. We have been getting limited doses but we are dividing what we get and holding separate vaccination camps for migrant workers,” said S. Chithra, Kerala’s labour commissioner.

“We are trying to bring about awareness that vaccines are harmless. We have posters in Assamese, Bengali, Hindi and Odia languages that we are putting out on social media,” she told the Thomson Reuters Foundation.

About 12 per cent of India’s 940 million adults are fully vaccinated, and more than 40 per cent have received a first dose, federal health ministry data shows.

Vaccination is seen as key to unlocking more jobs and easier movement between states, several of which require people to take a COVID-19 test that can cost 800 rupees ($10.78) – a couple of days’ wages for many – or proof of double vaccination to enter.

On the other side of India, in northeastern Assam state’s Tarinipur village, Tahir Hussain Talukdar said he had looked for the vaccine in local healthcare facilities three times but had no luck.

Talukdar, 25, who lost his housekeeping job at a multiplex in southeastern Andhra Pradesh, said he had survived on aid over the past year.

“There is no work in my village. The labour contractor I have been calling tells me to get vaccinated before I come. I need the vaccine because that’s the only way I can get work,” Talukdar said.

India has redoubled its efforts amid fears of a third wave.

Several construction firms and major businesses have arranged for their staff – both on payroll and informal workers – to get vaccinated.

State health workers are climbing hills and sailing through rivers and lakes to reach the vast country’s remotest parts. But the pace of vaccination remains slow and many are still falling through the cracks, campaigners and migration experts warn.

Migrants often remain invisible, even though their skills are desperately needed in manufacturing, construction and the hospitality industry.

“People seeking daily wage work are being asked if they are vaccinated,” said Benoy Peter, head of the Centre for Migration and Inclusive Development, which runs a mobile vaccination unit for migrants in Kerala in partnership with the state.

Peter said Kerala’s vaccination drive must be “sensitive to the challenges of migrants” and suggested more camps on Sundays and in the evenings to reach workers likely to be overlooked, such as day labourers, scrap collectors and women.

Most migrant workers are in the informal sector. With no steady employer, they cannot afford to take time off for the jab and are less likely to be invited to a vaccination camp, campaigners said.

“This section is most vulnerable in the challenges they face in accessing the vaccine,” said Sanjay Awasthi, head of the International Organization for Migration’s office in India. “It is imperative their coverage is factored in.”

Migrants in Kerala who received the shot hope to return to their pre-pandemic lives.

Samir Kuanar, 37, who lost his plumber’s job in Kuwait when the pandemic struck last year, managed to land an interview in July with a Qatar-based agency that supplies domestic labour.

“They gave me an offer letter but I hit a roadblock – I wasn’t vaccinated,” Kuanar said.

As luck would have it, he received his first dose last week.

“I hope to fly soon. Vaccination is my ticket to work,” he said.