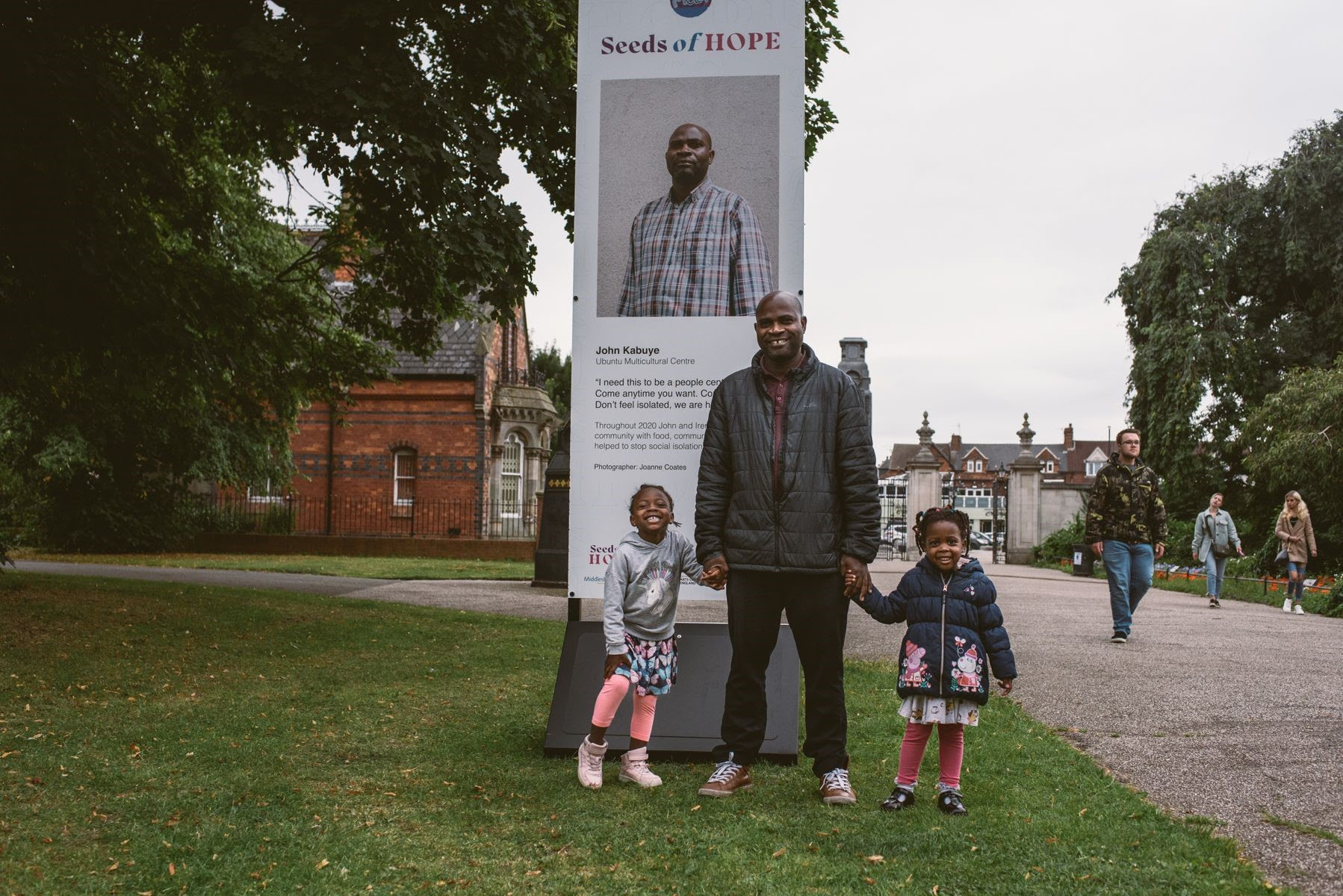 John Kabuye of the Ubuntu Centre with his portrait as part of the Seeds of Hope exhibition.

A prominent community leader has called for more Black representation on Middlesbrough Council.

John Kabuye believes that people need to take a chance and support members of his community to run in elections as there are currently no Black councillors.

Mr Kabuye, who runs the Ubuntu Centre as well as being a school governor and maths lecturer, added: “I looked at the council website to see who were my councillors, and who were the other councillors.

“There were only one or two Asian councillors, I didn’t see any Black councillors. I talked to myself and said, I think we need to change it.”

He stood to be a councillor for the Labour Party in 2015 in Marton East and in 2019 in Newport – on both occasions he came in third place.

Talking about the first time he stood, Kabuye, 46, added: “I won more votes than I expected which gave me the morale to do it again.

“When I stood, many people phoned me and congratulated me for standing and said ‘you’ve given us hope’.

“We [Black community] needed the example that you can stand and get some votes. People are scared [to stand] and that’s what I wanted to show, that sometimes we just need to try our best to be there.”

Through his work with the Ubuntu Centre, which supports members of the Black community in Middlesbrough but especially around Newport, he was part of the Seeds of Hope exhibition and his portrait was showcased in Albert Park.

Through this work, he tries to inspire younger members of his community and believes that they need to see people who look like them represented on the council.

Mr Kabuye, who is originally from Nigeria but has lived in Middlesbrough since 2004, added: “You need to allow Black people to be part of this. There is no point in saying we are diverse if some section is not giving you a chance. I am asking people to give us that chance to let our people have a voice.

“If you don’t have any representation in the council chamber it is very hard to make a proper decision, in that I mean by people who have had a lived experience.

“In local government, we don’t make the decisions there. So it’s very hard for us to influence there. We have very many people who could be very useful in discussions but we are not there and we are not being given a chance.

“I believe in role models, I believe that young people look up to older adults to inspire them.

“The role of councillors is very important and it’s something that has always been in my mind that I want to inspire our younger generation.”

While he acknowledges that there is some representation for the BAME community as a whole, he believes that needs to be extended to Black people as well.

He said: “The focus is often on one type of BAME, instead of on all BAME groups. I want all communities to go forward, not just one community, we need to ask how can all of us move forward, including Black people.”

What are local leaders doing to increase council diversity?

Speaking about council diversity, Mayor Andy Preston said: “I want to see more people come forward and stand up to be councillors. We need great people who’ll fight for change and fix problems.

“I don’t care whether these people are young or old, black or white, gay or straight – I just want to see hard-working, honest people fighting for a better Middlesbrough.”

Labour group leader Matt Storey said that his party would work to bring in more diverse candidates at the next election.

He added: “The Labour Party in Middlesbrough has a good record of selecting diverse candidates from the Black community, Muslim community, LGBTQ+ candidates and we have strict rules in place to ensure we select women in at least 50 per cent of Council seats.

“When we were in control of the Council the Labour Mayor’s Executive was 50 per cent female and the Labour Group had more women Councillors than ever before.

“There is always more we can do and we don’t select enough candidates from the Black community or other non-white communities.

“We must do better and in a town as richly diverse as Middlesbrough we need the Council to reflect the people it represents. It is something myself and Labour colleagues will work on for future elections.”

The current executive has no BAME members and only one female member.

Mayor Preston has said that there is no BAME representation because the Labour Party have refused to serve in his executive and the other groups only have White members.

He said the party’s decision not to be involved was ‘stubborn’ and a ‘disservice’ to Middlesbrough.

In response, Cllr Storey said that Labour was the only party to consistently select BAME candidates and was responsible for the first Muslim Civic Mayor on Teesside.

Labour added that the Mayor needed to question why the selection of committee chairs or the councillors in the other political groups were not diverse, before adding that he needed to get his ‘own house in order before slinging mud at Labour’.

Mick Saunders, Middlesbrough Independent Councillor’s Association’s group leader, said that it was up to individuals to stand for elections in their wards if they wanted to run as an independent.

This is because his group does not operate in the same way as a political party that chooses its own candidates.

He added: “I think the political parties should be doing more to bring Black and ethnic candidates forward for election. I would fully support any Black or ethnic members of the Middlesbrough community to stand as Independents.”

Leader of the Conservatives, Cllr David Coupe, was keen to see candidates of all backgrounds join the party.

He added: “We would encourage people to come along. For people from an ethnic background who don’t think this is for them, yes it is, you are there to represent your community.

“We are looking for candidates in the next election in 2023 and we would urge anyone to stand. Middlesbrough was built on diversity and we would encourage people to come and join us.”