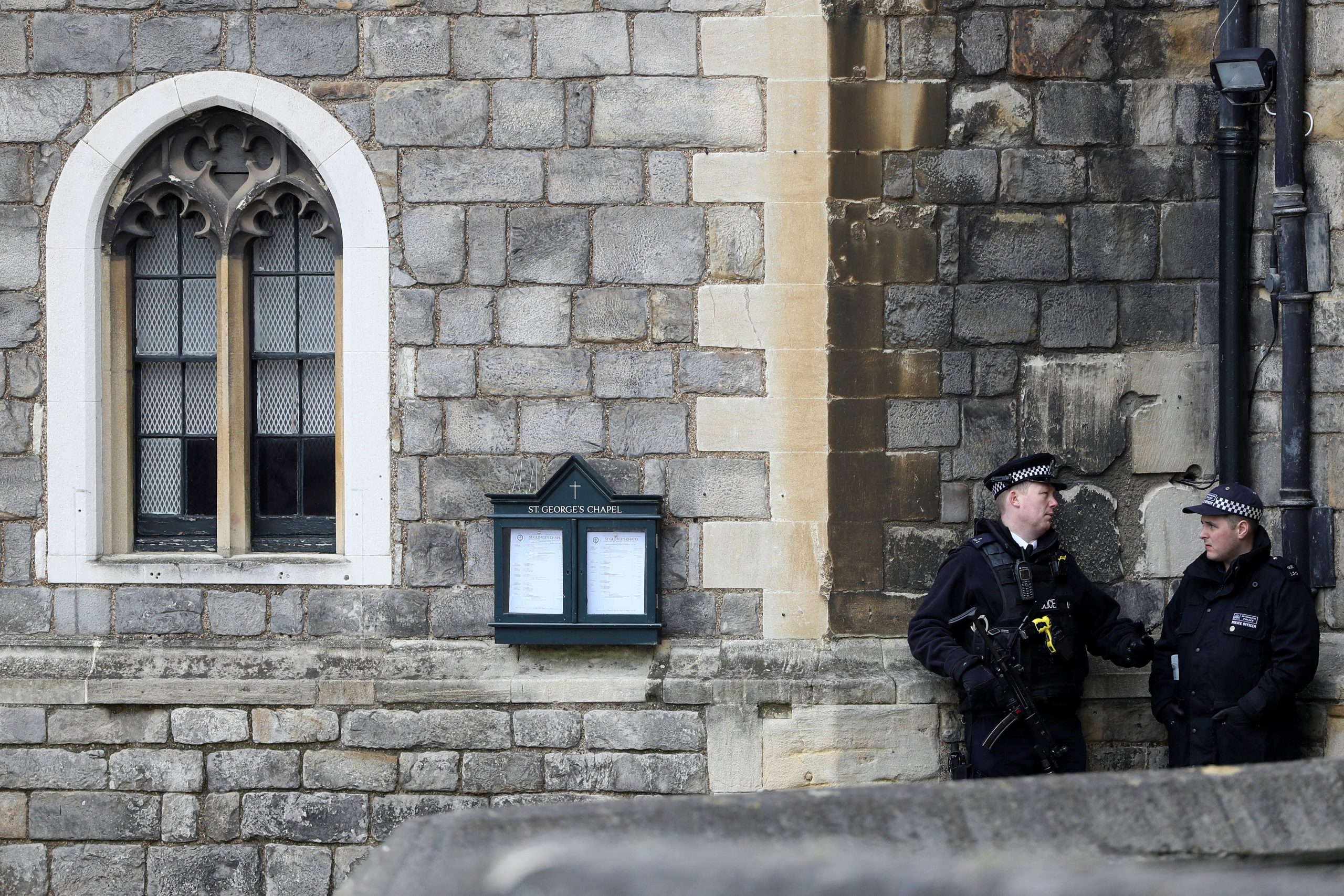 In a video shared on Snapchat, a masked man who purportedly tried to break into Windsor Castle in London says he was intent on revenge for the 1919 massacre of Sikhs in Jallianwala Bagh in British-ruled India. (A file photo of police officers on duty at Windsor Castle in Windsor, Britain, April 1, 2018. REUTERS/Simon Dawson)
Follow Us

BRITISH police said Monday (27) they were assessing a video purportedly made by a man who tried to break into a castle where Queen Elizabeth II was spending Christmas in which he said he “wanted to kill her.

In the video, obtained by The Sun tabloid, a masked figure in a dark hoodie holding a crossbow claims he will “attempt to assassinate Elizabeth, Queen of the Royal Family”.

The figure addresses the camera with a distorted voice and identifies himself as an Indian Sikh intent on “revenge” for an infamous 1919 massacre of Sikhs in British-ruled India.

The video was shared on the social media platform Snapchat, around 24 minutes before a suspect was detained early on Christmas Day by armed police within the grounds of Windsor Castle, west of London.

The 19-year-old arrested is being held for mental health treatment, after officers recovered a crossbow during the brief security breach, according to London’s Metropolitan Police.

“Following the man’s arrest, detectives are assessing the contents of a video,” the force said Monday (27).

It has said security processes were triggered “within moments” of the man entering the castle grounds at around 08.30 am on Saturday (25) and that he did not enter any buildings.

The incident occurred as the Queen spent a low-key Christmas Day there with her eldest son and heir to the throne Prince Charles and his wife Camilla.

In the video, the masked figure said he was seeking revenge for the Jallianwala Bagh massacre, as it is known in India.

In April 1919, British troops fired on thousands of unarmed men, women and children in the northern city of Amritsar.

The number of casualties from the event, which galvanised support for independence, is unclear. Colonial-era records put the death toll at 379, but Indian figures put the number closer to 1,000.

“It is also revenge for those who have been killed, humiliated and discriminated on because of their race,” the figure said in the video.

“I’m an Indian Sikh, a Sikh. My name was Jaswant Singh Chail, my name is Darth Jones.”

He also makes several references to Star Wars during the brief address, while also predicting his own “death is near”.

The suspect in the castle incident has been sectioned under the Mental Health Act, which allows the authorities in England and Wales to detain and treat people with mental health issues without their consent.

Those held under the legislation are deemed to be a risk to themselves or others.

Police are also carrying out searches at a housing estate in Southampton, where the suspect reportedly lived with his family.