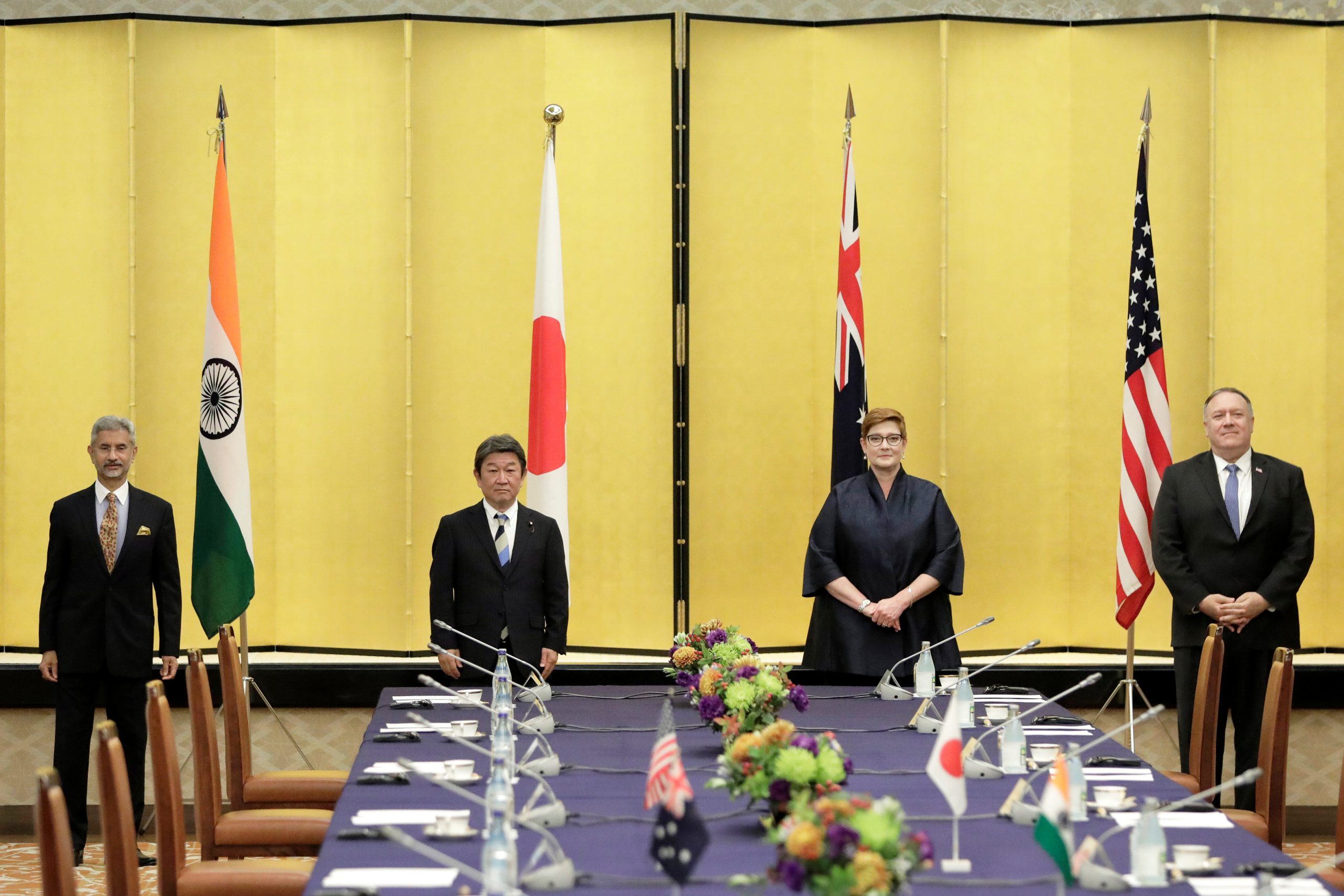 US secretary of state Mike Pompeo on Tuesday (6) visited Toyko to meet with some of Washington’s closest allies in Asia, Japan, Australia and India, to shore up support against what the US says is China’s dangerous and growing regional influence.

It is Pompeo‘s first trip to East Asia since July 2019 and comes as ties between the US and strategic rival China are at their worst in decades.

The one-day visit includes a meeting of foreign ministers of the Quad grouping of nations: the US, Australia, India and Japan.

The first quadrilateral dialogue of officials was held in 2007, followed by a joint naval exercise, but was abandoned the next year when Australia withdrew amid Chinese complaints the Quad was an attempt to contain China’s rise.

The group, however, was revived in 2017 with official-level talks.

While Washington has been looking to build support among Asian allies against Beijing, others have so far played cautiously to avoid a direct confrontation because of economic ties.

Pompeo hit hard at China, referring to Covid-19 as the “pandemic that came from Wuhan”, which he said was “made infinitely worse by the Chinese Communist Party’s cover-up”.

He warned it was “more critical now than ever that we collaborate to protect our people and partners from the CCP’s exploitation, corruption and coercion”.

“We see it in the South and East China Seas, the Mekong, the Himalayas, the Taiwan Strait,” he said.

India, previously seen as cautious about the revival of the Quad, has this year been involved in border clashes with China. At least 20 Indian solders were killed while China suffered an unspecified number of casualties in a bloody hand-to-hand clash at the border in June.

“Pleased to see the progress of our partnership in so many fields,” he said on Twitter after the meeting. “Will work together for stability and prosperity in the Indo- Pacific.”

Later, ahead of the Quad meeting, Jaishankar added: “Look forward to the discussions today on connectivity and infrastructure development, terrorism, cyber & maritime security and stability and prosperity in the region.

“Committed to upholding the rules-based international order, underpinned by the rule of law, transparency, freedom of navigation, respect for territorial integrity & sovereignty and peaceful resolution of disputes.

“Meeting will assess the impact of Covid-19 pandemic on global affairs. Imperative for likeminded countries to coordinate responses. Affirm the importance of maintaining a free, open and inclusive Indo-Pacific.”

Following a meeting between Pompeo and his Australian counterpart, Marise Payne, the US said the two discussed worries about China’s regional “malign activity” — language likely to elicit a response from Beijing.

“The Secretary and the Foreign Minister also discussed their shared concerns regarding the People’s Republic of China’s malign activity in the region,” a US State Department official said in the statement.

However, Payne’s statement did not mention China.

“Whether it is individual human rights, market-based economies, countering disinformation or building greater resilience into our supply chains, our common values and interests mean we share a vision for a free, open and prosperous Indo-Pacific,” she said on social media.

Japanese foreign minister Toshimitsu Motegi also did not mention China in his remarks.

“Lately, the present international order has been challenged in various fields and the new coronavirus is accelerating the trend,” Motegi said at the start of the meeting.

“Our four countries share the objective of strengthening a free and open, rule-based international order.”

China, meanwhile, has denounced the Quad as an attempt to contain its development.

“We hope the relevant countries can proceed from the common interests of countries in the region, and do more things that are conducive to regional peace, stability and development, not the other way around,” Chinese foreign ministry spokesman Wang Wenbin said.

The Quad meeting is unlikely to yield a specific action plan, although the gathering itself may serve as a warning to China and play to its fears that the grouping might one day grow into a formalised structure like NATO, experts have said.

Washington and Beijing, the world’s top two economies, are at loggerheads over a wide range of issues from Beijing’s handling of the coronavirus to its imposition of a new security law in Hong Kong and ambitions in the South China Sea.

Most Asian allies have been pleased with Washington’s toughness toward their regional rival China, but have remained wary of going too far in antagonising China.

Part of the problem for Washington’s Asian allies is their dependence on China for trade. China was the top destination for Australian exports in 2019, the No.2 destination for Japanese exports and the No.3 destination for Indian exports, according to IMF direction of trade statistics compiled by Refinitiv.

Japan told the US it would like to deepen cooperation in the field of cyber security, according to a statement from Tokyo’s foreign ministry.

When Pompeo met Japan’s foreign minister he said new the prime minister, Suga, was a “force for good” and would strengthen the relationship between Washington and Tokyo.

The US has said it greatly values the meeting of the Quad grouping of foreign ministers as a platform to strengthen its solidarity against China with regional allies.

In an interview with Japan’s Nikkei newspaper, Pompeo spoke of formalising and potentially broadening the Quad grouping.

“Once we have institutionalised what we are doing — the four of us together — we can begin to build out a true security framework,” he said, suggesting other countries could be added to that “fabric” at “the appropriate time”.

Analysts say such remarks serve as a warning to China and play to its fears that the Quad might one day take shape as NATO did in Europe to contain the Soviet Union.

Ayushmann Khurrana staying away from family due to Coronavirus scare