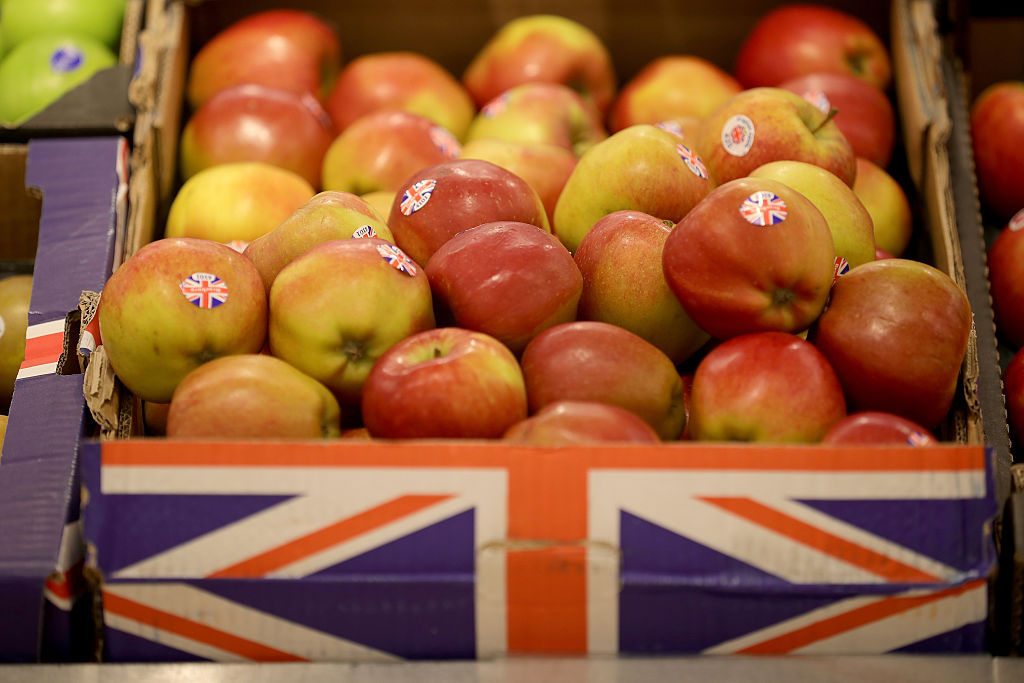 British apples at display at a supermarket in Rochdale, England (Photo by Christopher Furlong/Getty Images)

UK INTERNATIONAL trade secretary Liz Truss has lauded exports of apples from England to India, for the first time in half a century, as a sign of the UK-India Enhanced Trade Partnership in action.

Truss said on Twitter over the weekend that the exports of the fruits from a farm in south-east England marked a first for the UK-India trade relationship in 50 years. Her post came in response to a tweet by UK parliamentary undersecretary of state (international trade) Ranil Jayawardena who shared details of his visit to the AC Goatham and Son apple firm in Kent.

“Our apples are now on the way to India for the first time in 50 years thanks to the Enhanced Trade Partnership,” Truss said.

Our apples are now on the way to India for the first time in 50 years thanks to the Enhanced Trade Partnership. 🇬🇧 🍎 🇮🇳 👇 https://t.co/ZSYkqk72Fx

The Enhanced Trade Partnership between the two countries, seen as a precursor to a comprehensive Free Trade Agreement (FTA), was agreed by prime minister Boris Johnson and his Indian counterpart Narendra Modi during their virtual meeting in May.

The meeting was followed up by the formal signing of the agreement by Truss and Indian commerce and industry minister Piyush Goyal. It sets a target to double UK-India bilateral trade by 2030.

“India is an outlet that we’ve looked at for a number of years but unfortunately we were precluded at the time because of a ban running back to the 70s,” AC Goatham and Son co-owner Ross Goatham told the UK department of trade.

“With the announcements made the other week of the trade deal, we were pretty much straight on the front foot and I think we’ve had about 20 Indian firms contact us recently, asking if they can buy our apples,” he said.

Jayawardena said during his visit to the farm that the move reflected the UK government’s post-Brexit strategy of expanding Britain’s export markets.

The UK government in May launched a 14-week consultation to seek viewpoints of the public and business before formal negotiations on a UK-India FTA start later this year.

London says it wants a deal with New Delhi that will slash barriers to doing business with India’s £2trillion economy and market of more than a billion consumers. This includes doing away with tariffs of up to 150 per cent on whiskey and 125 per cent on British-made cars, among other products.

The UK department of trade said the aim of the FTA with India is also to enable British services firms to operate in the Indian market.

Trade between the UK and India stands at around £23 billion and both countries want to double it under the ‘Roadmap 2030’ – the plan to deepen cooperation between the two nations across a number of key areas.