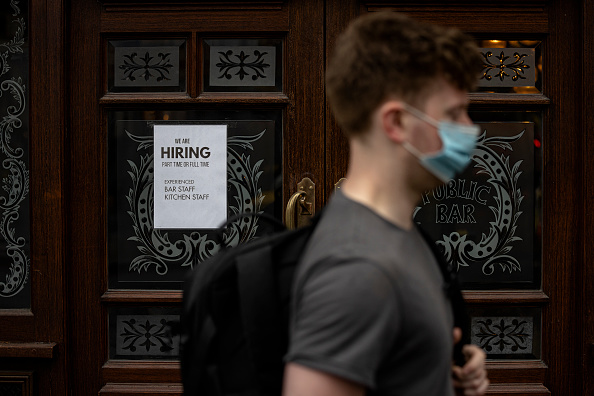 A man wearing a face mask walks past a recruitment sign in the window of a pub in Westminster in London, England. (Photo by Rob Pinney/Getty Images)

BRITAIN’s employers are struggling with acute staff shortages since the late 1990s, business reports said, adding that the rush to reopen from lockdown and a sharp drop in overseas workers due to Covid and Brexit has fueled the shortage.

Recruitment and Employment Confederation (REC) and the accountancy firm KPMG have said that the number of available workers plunged in June at the fastest rate since 1997, adding that the rush to reopen after pandemic restrictions is leading to bottlenecks.

According to the REC and KPMG survey of more than 400 recruitment firms, the number of permanent jobs available in England rose at its fastest rate since 1997 in June as the economy reopened. But at the same time availability of workers hit a 24-year low.

Brexit, pandemic-related uncertainty and the furlough scheme have all weighed on the number of job seekers available, as per the firms.

Key sectors such as transport and logistics, hospitality, manufacturing and construction  are reporting hiring challenges, says the report, adding that the issue is now spreading to typically higher-paying sectors such as finance, IT, accounting and engineering. Demand was also “historically strong” across the public sector, says the report.

The report also noted that there has been a rapid increase in starting pay rates, as both permanent appointments and temporary billings increased sharply.

Unemployment in the UK has fallen to 4.7 per cent, which is far below the  expectations last year that Covid-19 might drive up job losses at the fastest rate since the 1980s, leading to 12 per cent unemployment.

Another survey by the British Chambers of Commerce on Thursday (8) too pointed to employers facing increasing recruitment difficulties, saying 70 per cent firms that tried to hire staff had to struggle to find them.

An estimated 1.3 million non-UK workers have left the country during the pandemic. Business leaders said easing post-Brexit immigration rules could help address shortages, but also called for further investment in skills and training from the government to increase the numbers of domestic candidates.