Ian Byrne, the MP for Liverpool, West Derby said that the match was “one of the worst experiences in my life.” 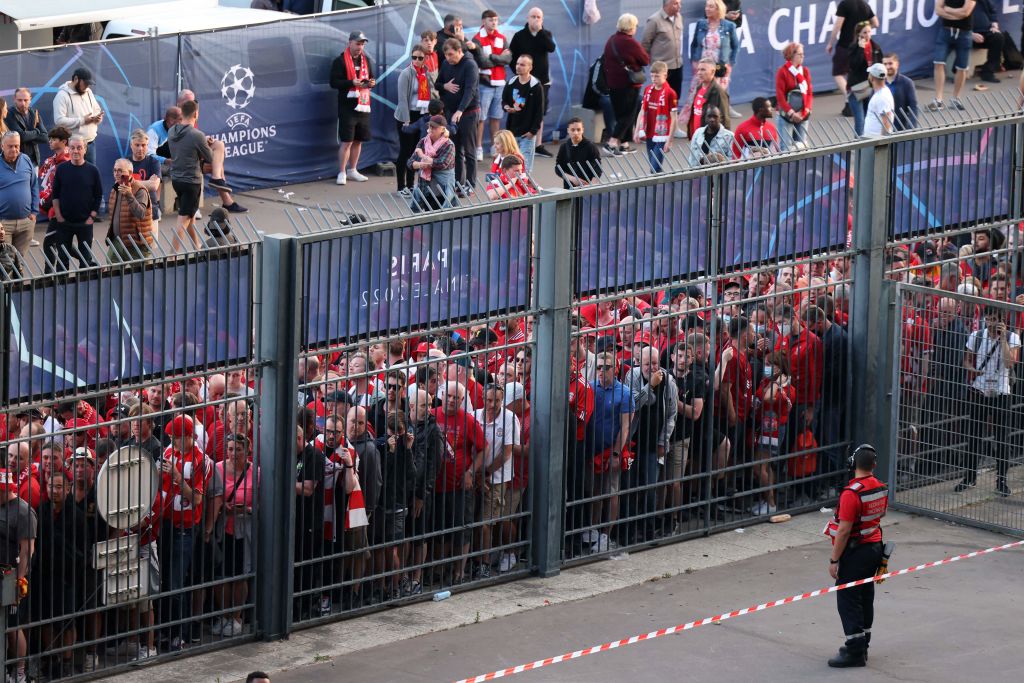 Liverpool fans stand outside unable to get in in time leading to the match being delayed prior to the UEFA Champions League final football match between Liverpool and Real Madrid at the Stade de France in Saint-Denis, north of Paris, on May 28, 2022. (Photo by THOMAS COEX/AFP via Getty Images)
Follow Us

British football fans and officials on Sunday condemned French police for using tear gas on Liverpool supporters ahead of Saturday’s Champions League final in Paris, saying they were treated “like animals”.

One fan, Paul Machin, said in a YouTube video that what he witnessed in Paris was “unlike anything I’ve seen at a football match before”, condemning “totally and utterly reprehensible behaviour from the French police who were an absolute disgrace”.

Another supporter, Andrew Whittle, told Sky News: “Everyone was just funnelled into one place” and the crush “was a real Hillsborough sort of moment”.

Although no-one was seriously injured, frightening scenes outside the Stade de France have prompted comparisons with the 1989 stadium disaster at a Liverpool match in Sheffield, which caused 97 deaths in a crush and prompted a major overhaul of stadium safety standards.

Sunday was also the anniversary of another stadium disaster, when 39 people were killed at Heysel Stadium in Brussels in 1985 as Juventus fans tried to flee Liverpool fans.

Liverpool legend Kenny Dalglish had laid a wreath in honour of the victims ahead of Saturday’s match.

The ex-Liverpool star, who was the club’s manager at the time of Hillsborough, tweeted after the game that “the way they (fans) were treated by authorities was an absolute joke. Nobody should ever be afraid to go to a football game.”

European football governing body UEFA blamed “fake tickets which did not work in the turnstiles” for a 35-minute delay to the final between Liverpool and Real Madrid.

Ian Byrne, the MP for Liverpool, West Derby, for the opposition Labour Party, told Sky News that the match was “one of the worst experiences in my life, it was absolutely appalling”.

Fans were treated “like absolute animals” and those arriving hours before the game were “getting teargassed and kettled in”, he said.

Merseyside Police said in a statement that there were “distressing scenes at the match,” where its officers were deployed in an observer capacity.

The force insisted “the vast majority of fans behaved in an exemplary manner”.

Liverpool Football Club said they were “hugely disappointed” that their supporters had been subjected to an “unacceptable” breakdown of the security perimeter” at the stadium.

Liverpool players were set to take part in an open-top bus parade through the city on Sunday afternoon despite losing in Paris.

Liverpool Mayor Joanne Anderson tweeted: “I know many have had a distressing time,” adding that she supported the club’s “call for an explanation into what happened before kick off.”

– ‘Shambolic and disorganised’ –
Liverpool supporters’ association Spirit of Shankly said in a statement that “the failure rests with UEFA, the French authorities and police”, criticising the “not unusual heavy-handed response from the police and their indiscriminate use of tear gas and pepper spray”.

It said Liverpool fans “were not late” and “had legitimate tickets but failed to gain entry”.

Current and former players also criticised the organisation of the event.

Liverpool player Andy Robertson told journalists after the match that “tear gas getting thrown at people was unacceptable.”

“It was horrendous for our fans and all families that have been through it as well.”

Former England star Gary Lineker, now a BBC presenter, who was at the match, addressed UEFA in a tweet saying: “I’m not sure it’s possible to have a more poorly organised event if you tried. Absolutely shambolic and dangerous”.

“I saw no behaviour from Liverpool fans that warranted the police reaction,” he added.

Former Liverpool defender Jim Beglin tweeted that after the match “organised gangs set about mugging departing fans”, with “not a police officer in sight”.

Britain’s Culture Secretary Nadine Dorries described the footage of the mayhem as “deeply concerning” and joined Liverpool in urging UEFA to launch “a formal investigation into what went wrong and why”.

“It is in the interests of everyone involved to understand what happened and to learn lessons from these events.”

UEFA said they were “sympathetic” to the fans affected and would review the situation with French authorities.

However, French Interior Minister Gerald Darmanin pointed the finger at the Liverpool fans, tweeting that “Thousands of British ‘supporters’ either without tickets or with fake ones forced their way through and sometimes behaved violently towards the stewards”.