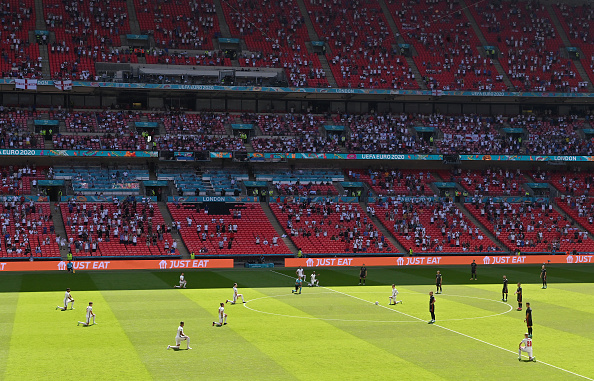 England players take a knee in during their Euro 2020 Group D match against Croatia at the Wembley Stadium in London. (Photo by Justin Tallis – Pool/Getty Images)

UEFA said on Friday (18) that it has a contingency plan to replace Wembley as the venue of Euro 2020 final if the British government does not exempt travelling foreign fans from the 10-day quarantine rules.

With the proposed plan of lifting final Covid-19 restrictions being postponed from June 21, tournament organisers are now in negotiations with the government.

The London stadium is scheduled to host both semifinals and the final.

According to The Times newspaper, if Wembley is unable to accept travelling fans then Budapest could be the alternative venue.

“There is always a contingency plan but we are confident that the final week (of matches) will be held in London,” UEFA said in a statement.

European football’s governing body said discussions with local authorities centred on allowing fans of participating teams to attend matches “using a strict testing and bubble concept that would mean their stay in the UK would be less than 24 hours and their movements would be restricted to approved transport and venues only.”

UEFA said it understood the pressures the government faced. It hoped discussions would reach a “satisfactory conclusion” and was delighted that capacity at Wembley was scheduled to go up to at least 50 per cent for the knock-out round matches.