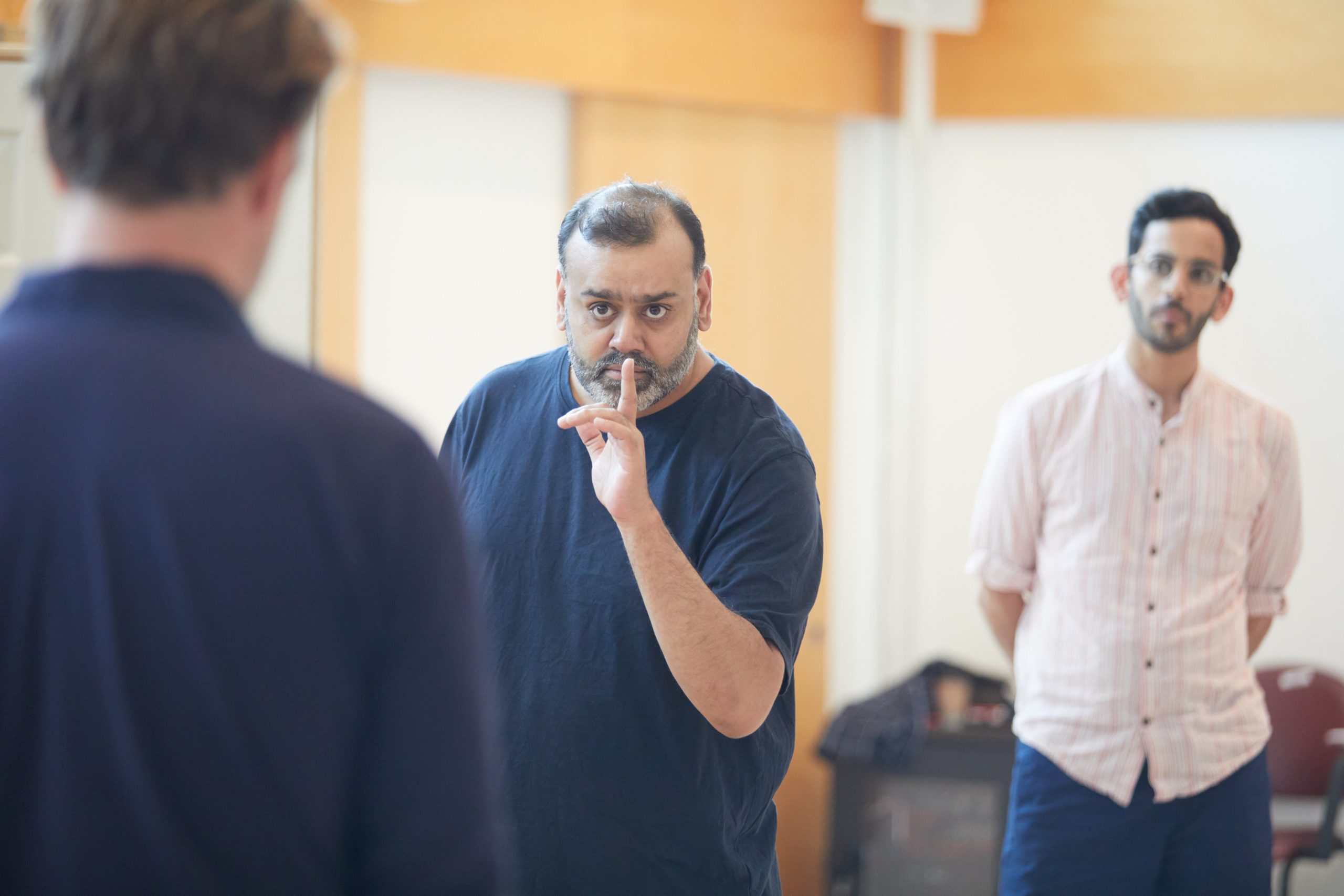 PERFORMANCE: Tony Jayawardena and Sid Sagar in rehearsals for The Invisible Hand by Ayad Akhtar at the Kiln Theatre. (Photo credit: Mark Douet)

A REVIVAL of Pulitzer Prize winning writer Ayad Akhtar’s financial thriller The Invisible Hand at a north London theatre is more relevant now than it was during its initial run, a cast member has said.

Following a sold-out run in 2016, the play will return to the Kiln Theatre as it prepares to reopen for the first time since the coronavirus outbreak last March.

Akhtar’s play centres upon American banker Nick, who is kidnapped in Pakistan by a terrorist organisation and given the chance to buy his freedom by raising $10 million on the stock market.

Most of the cast and crew from the original production will be working together once again, including actors Tony Jayawardena, Sid Sagar, Daniel Lapaine and director Indhu Rubasingham.

Revisiting the story five years after he originally performed it was an “interesting experience”, said Jayawardena who plays the terrorist group’s leader, Imam Saleem.

During the initial run, the Brexit referendum had just taken place. Since then, Donald Trump was elected president of the United States; the UK has left the EU and a pandemic has swept across the world.

The play’s themes of capitalism and money have “taken on a whole new dimension,” Jayawardena said.

“After Covid, a lot of businesses have suffered and people have lost their lives,” he told Eastern Eye. “Although people are not necessarily desperate, there is this feeling of not being looked after and things being really hard.

“Within the same time, we’ve seen the number of billionaires and millionaires go up. I think The Invisible Hand is still pretty relevant, if not more so now than it was in 2016.”

Although the play has mostly stayed the same, Akhtar has added some new lines (including a Trump reference) to keep it timely.

“There is a line in the play where my character does a deal to buy a box of vaccines and in 2016, that meant one thing and in 2021, it means a whole other different thing,” Jayawardena added.

Jayawardena described the return of the show as “reuniting with family”. He said, “I love working with the Kiln (he also starred in the Kiln’s 2018 production White Teeth) so it’s nice to be back there seeing the same staff and seeing the boys (Sagar and Lapaine) again.”

For Jayawardena, it is a “huge” moment to perform live on stage again. The closure of theatres has meant many creatives have been out of work for some time, he explained, so preparing for its reopening has been a “joyous experience”.

He knows people in the arts who have “lost their entire careers” over the past year.

“Since last March, it has felt like the major reason why I was living my life was gone,” the actor said. “I completely understand why (the theatres closed), but it was a big shock to everyone and personally, it’s been hard. Mentally hard, physically hard, emotionally hard, as it has been for many others.”

Although Jayawardena acknowledged some may not feel comfortable returning to theatres (he recently watched Tanika Gupta’s new play Out West at the Lyric Hammersmith theatre in west London), he hopes there will be a wave of support as venues open their doors once again.

“I’m a great believer that having a rich culture of arts going through any community is to its absolute benefit. It’s not just the icing on the cake; it’s a big part of the cake that makes the cake better.

“I’m always trying to encourage more people to go to the theatre anyway, but at the moment, all the artistic industries are in need of any support that people can give,” Jayawardena said.

Theatre has been a constant in his life. Growing up in north London, his parents took him to see musicals (“I remember seeing Michael Ball in Aspects of Love and it always stuck with me”) and he starred in numerous school plays. It would shape his love for the arts in later life.

His drama teacher in secondary school noticed his talent and encouraged him to take it further.

“When I got involved in school productions, the rehearsal room was where I felt I’d found my voice,” Jayawardena recalled.

At university, Jayawardena continued acting in plays and after graduating, applied for drama school. He was accepted to the Guildhall School of Music & Drama, graduating in 2003 with an agent. He has not stopped performing since.

“I found a passion in my life, something which brought out the best in me and something, for the first time in my life, that I loved working really hard at as I’m generally quite lazy,” he laughed.

For Jayawardena, telling a story to an audience and them potentially connecting to it is a beautiful experience. The feeling of connecting to a narrative is something he can relate to.

“I know what it feels like because I’ve been that member of an audience,” he said. “I have been moved, comforted and understood by pieces of fiction and that’s been massively important to me in my life. It has really saved me at times when I’ve been at my lowest. So, to have the possibility of knowing you might do that for one other person, it feels worth it.”

The Invisible Hand will be showing at the Kiln Theatre until July 31.