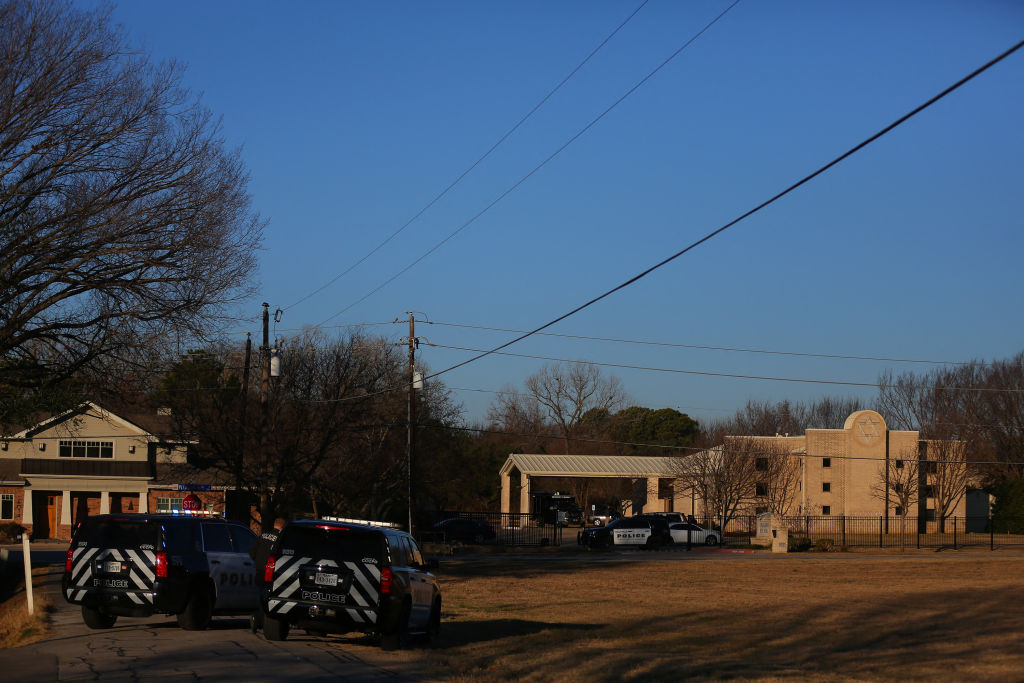 Police vehicles sit outside of Congregation Beth Israel Synagogue in Colleyville, Texas, some 25 miles (40 kilometers) west of Dallas, on January 16, 2022. All four people taken hostage in a more than 10-hour standoff at the Texas synagogue have been freed unharmed, police said late January 15, and their suspected captor is dead. (Photo by ANDY JACOBSOHN/AFP via Getty Images)
Follow Us

THE MAN who held four people hostage at a Texas synagogue was on Sunday (16) identified by US authorities as a British citizen while UK police later arrested two teens over an attack that president Joe Biden called an “act of terror.”

The captor, who died in the 10-hour siege in the small town of Colleyville on Saturday (15), was named by the FBI as 44-year-old Malik Faisal Akram, who sought the release of a convicted Pakistan prisoner.

Hours later, Britain’s counter-terrorism police arrested two people and were questioning them in connection with the incident.

“Two teenagers were detained in South Manchester this evening. They remain in custody,” the Greater Manchester Police said in a statement.

The FBI’s field office in Dallas had earlier said there was “no indication” that anyone else was involved in the attack on the Congregation Beth Israel synagogue.

The four hostages – including a respected local rabbi, Charlie Cytron-Walker – were all freed unharmed, prompting relief in the United States, where the Jewish community and Biden renewed calls to fight anti-Semitism.

“There is no question that this was a traumatic experience,” Cytron-Walker said in a statement.

“We are resilient and we will recover,” he added.

A man identifying himself as Akram’s brother Gulbar said in a Facebook post that the suspect had suffered from mental health problems.

“We would like to say that we as a family do not condone any of his actions and would like to sincerely apologise wholeheartedly to all the victims involved in the unfortunate incident,” Gulbar said in the post to a Muslim community Facebook page in Blackburn, in northwest England – where British police said Akram was from.

Gulbar added that he had been in touch with law enforcement in Texas and that his family hoped to get Akram’s body back to Britain for a funeral.

Biden declined to speculate on the motive but appeared to confirm reports that the hostage-taker was seeking the release of convicted terrorist Aafia Siddiqui, a Pakistani neuroscientist known as “Lady Al-Qaeda.”

“This was an act of terror” committed by an assailant who apparently “insisted on the release of someone who’s been in prison for over 10 years,” Biden told reporters during a visit to a hunger relief organisation in Philadelphia.

Britain’s foreign minister Liz Truss condemned the hostage-taking as an “act of terrorism and anti-Semitism.”

Siddiqui, the first woman to be suspected by the United States of links to Al-Qaeda and a cause celebre in Pakistan and in south Asian jihadist circles, was detained in Afghanistan in 2008.

Two years later she was sentenced by a New York court to 86 years in prison for the attempted murder of US officers in Afghanistan.

She is currently being held at a prison in Fort Worth, Texas – about 20 miles (32 kilometres) away from the synagogue which Akram attacked.

Any links she may have to Akram remained unclear.

FBI special agent Matthew DeSarno told reporters in Colleyville after the standoff that the investigation would “have a global reach.”

Britain’s ambassador to Washington confirmed that British authorities were “providing our full support to Texas and US law enforcement agencies.”

Cytron-Walker in his statement credited his congregation’s previous security training from the FBI and others with their survival from a harrowing ordeal.

“In the last hour of our hostage crisis, the gunman became increasingly belligerent and threatening,” the rabbi said.

“Without the instruction we received, we would not have been prepared to act and flee when the situation presented itself.”

Other residents of Colleyville, about 25 miles northwest of Dallas, were left struggling to comprehend the incident.

“Colleyville… It’s one of the safest towns in North Texas,” said Austin Sewell, owner and founder of the North Texas Kings baseball club, whose field is across the street from the synagogue in a quiet residential neighbourhood.

“It’s mind-blowing, to be honest,” he said

At one point the standoff involved some 200 local, state and federal law enforcement officers massed around Colleyville.

A Facebook livestream of the congregation’s Shabbat service appeared to capture audio of a man talking loudly, but did not show the scene inside the building.

One hostage was freed early in the standoff.

Hours later, after what police said were extensive negotiations, an elite SWAT team burst into the synagogue and the remaining three hostages were freed.

Journalists nearby said they heard a loud bang – likely a flash-bang grenade used as a distraction – and shots.

The siege had sparked an outpouring of concern from Jewish organisations.

Biden pledged to “stand against anti-Semitism and against the rise of extremism in this country.”