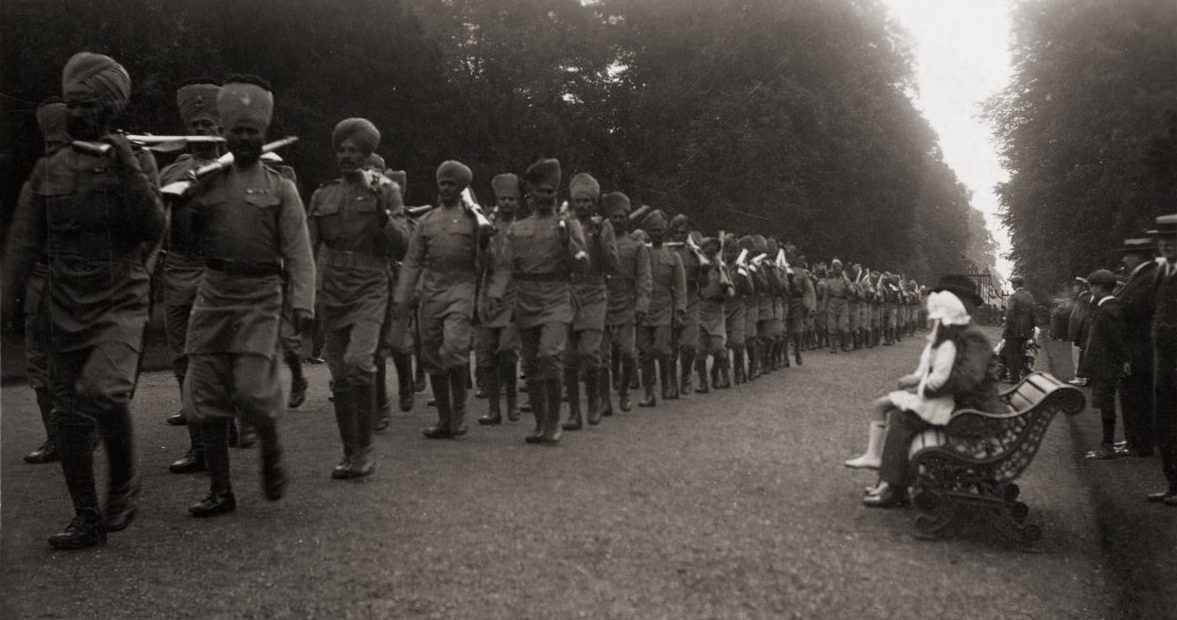 Indian troops at Hampton Court in 1919. (© Collection of John Sheaf)
Follow Us

THE contribution of Indian soldiers in the First World War is to be remembered at Hampton Court Palace with an outdoor arts installation called Standing with Giants.

The display will include “25 specially commissioned silhouettes representing the Indian soldiers who took up residence on the Hampton Court estate for the coronation of King Edward VII in 1902, and again for the First World War Victory Parade in London” in 1919.

The initiative from Historic Royal Palaces was welcomed by the historian Kusoom Vadgama. She told Eastern Eye: “It’s a good start – the more people who know about Indians soldiers the better.”

She balked slightly at the £25 cost for an adult ticket and urged a rethink, especially in the light of the pandemic: “For a typical Indian family, that might be over £100. That might put people off.”

Official reports state that in First World War from 1914 to 1919, “1,440,500 men and women, including 100,000 Gurkhas, volunteered for service in the British Indian Army. They fought on the Western Front, in Gallipoli, Persia, Egypt, Palestine and Mesopotamia.”

The reports add that by the end of the war, “113,743 Indians were reported dead, wounded or missing”.

The Indian soldiers acquitted themselves well, although they were fighting in harsh and unfamiliar terrain. Their plight was set out by Mulk Raj Anand in his 1939 novel, Across the Black Waters.

Published just as the Second World War was starting, it describes the experience of Lalu, a sepoy in the Indian Army fighting on behalf of Britain against the Germans in France during the First World War. He is portrayed as an innocent peasant whose poor family was evicted from their land and who only vaguely understands the reasons for the war.

A total of 2.5 million Indian soldiers enlisted for Britain in the Second World War. They served in the North African campaign against the Germans; in Eritrea and Abyssinia against the Italians; in West Asia, Iran and Iraq; in the Far East; in Italy, where they took part in some of the bloodiest fighting at the siege of Monte Cassino and elsewhere. By the end of the war, 36,092 Indians were killed or missing, 64,350 were wounded and 79,489 taken prisoner.

For the 1919 Peace Celebrations, almost 1,800 Indian Army officers, soldiers and civilian workers, set sail from India to England. They were due to take part in a special parade through central London on July 19. A change of plan, with the signing of the delayed Peace Treaty, together with an outbreak of influenza on the voyage, would have made them too late, but King George V called for a second Victory March for the soldiers on August 2.

At Hampton Court Palace, a camp had been specially created to house them, following instructions from the monarch that “everything possible should be done for the comfort of the men”.

Accommodations were made to meet the cultural and religious requirements of the men, and – recognising that this was the first visit to England for the vast majority of those in attendance – the soldiers were entertained with excursions to attractions in London and across the country, including trips to the Tower of London and a Chelsea football match.

The camp was one of the largest gatherings of people from India ever assembled in Britain at the time, but to date has been largely overlooked by historians.

The exhibition was held last year at Blenheim Palace in Oxfordshire. The 25 silhouettes of the Indian soldiers have been added for Hampton Court.

“We have been overwhelmed by the amazing reactions from visitors to our installations, the heartfelt stories, the obvious need to grieve, and just the enormous positive energy towards the project.

“This display continues our work to help raise awareness and donations to support our veterans and the amazing work being carried out by the Royal British Legion.”

Sebastian Edwards, deputy chief curator at Historic Royal Palaces, which looks after Hampton Court and other palaces, said, “While many may be familiar with the wartime account of Hampton Court Palace – which, like so many other great houses, saw its staff enlist to fight, and its flowerbeds turned into to vegetable plots – there is a much less well-known story which we are telling for the first time with the help of Standing with Giants; of the
Indian Army camp at the Palace.

“We hope visitors will enjoy discovering this unique moment in Hampton Court’s history, when the people of England, India and south-east Asia were unexpectedly brought together to share the joy and relief of peace after the awful global conflict of the First World War.”

The installation will also explore the role played in the First World War by some of the palace’s former residents, from front-line nurses to campaigners for improved care for injured veterans, with a specially created trail map.

Having reopened to the public just before the outbreak of the war – after being closed for a year for fear of attacks by members of the Suffragette movement – Hampton Court remained a popular attraction between 1914 and 1918, with up to 12,000 visitors on busy weekends. Behind the scenes, however, many of the palace’s staff and residents had signed up to help with the war effort, with 16 gardeners enlisting into local regiments and 21 palace residents becoming nurses.

There is another Indian connection. Princess Sophia Duleep Singh, daughter of Maharajah Sir Duleep Singh, the last Sikh king, lived in Hampton Court in an apartment in Faraday House given to her by Queen Victoria as a grace and favour.

She was a prominent figure in the Suffragette movement.

The princess combined her role as a nurse in a local hospital with that of chair of the YMCA War Relief Fund, raising money for the welfare of Indian troops on active service, while her neighbour Lady Dorothy Fielding’s life-saving work with the Munroe Ambulance Corps saw her become the first woman in Britain to be awarded a military medal.

Perhaps the most poignant contribution the palace made was the wood used to make a coffin for the Unknown Solider, which was supplied from an oak tree felled in Hampton Court’s Home Park.

Standing with Giants is at Hampton Court Palace from next Wednesday (3) until November 28. Tickets: Adult £25.30; Concession £20.20; Child £12.60. Free for Historic Royal Palaces members.