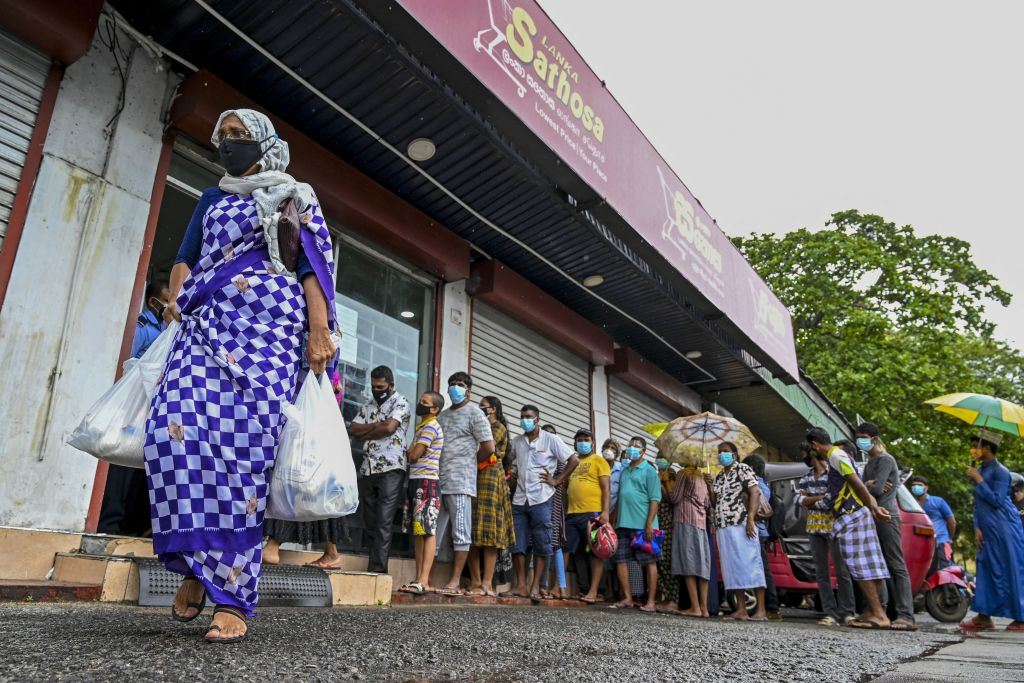 A woman carrying bags walks past people standing in a queue outside a state-run supermarket to buy essential food items in Colombo on September 3, 2021 as Sri Lanka began imposing price controls from September 3 (Photo by ISHARA S. KODIKARA/AFP via Getty Images)

SRI LANKA imposed price controls on key foods on Friday (3) as the government stepped up the use of emergency powers to counter shortages.

Queues formed outside state-run supermarkets even before they opened to sell sugar seized from private dealers at less than half the price being charged on the open market 24 hours earlier.

“There is no sugar available elsewhere,” moaned K Perumal, 62, at the Sathosa store in Colombo’s Maligawatte area where he waited for his 2-kilogram quota.

“There are small children in my family, we need about six kilos of sugar a month,” he said. “I have not been able to find milk at all.”

Authorities said that more than 32,000 tons of sugar was found in raids on private warehouses carried out on Wednesday (1) and Thursday (2).

But there have also been sharp price rises for onions and potatoes, while milk powder, kerosene oil and cooking gas are also in short supply.

Only government stores have been opening because of a nationwide coronavirus lockdown that the government on Friday (3) extended for one week.

Experts have blamed the food crisis on a shortage of foreign exchange to import and maintain stocks.

The government, which is also short of cash to service its foreign debt, has insisted the shortages are a result of traders profiting from pandemic restrictions.

“What we see is not a genuine shortage,” foreign minister Gamini Lakshman Peiris told a press conference on the food emergency. “It is an artificial shortage created by a few.”

Junior finance minister Nivard Cabraal said only a handful of items were in short supply, adding: “We have ample food stocks for the foreseeable future”.

However, several traders said they had difficulty accessing foreign exchange to finance imports.

The pandemic has badly hit Sri Lanka’ tourism-dependent economy which shrank by a record 3.6 per cent in 2020.

The government last year banned imports of vehicles and other items, including edible oils and the widely used spice turmeric in a bid to save foreign currency.