The board has denied the allegations made by a senior journalist that politicians instructed the board to bear costs of Gunathilaka’s defence. 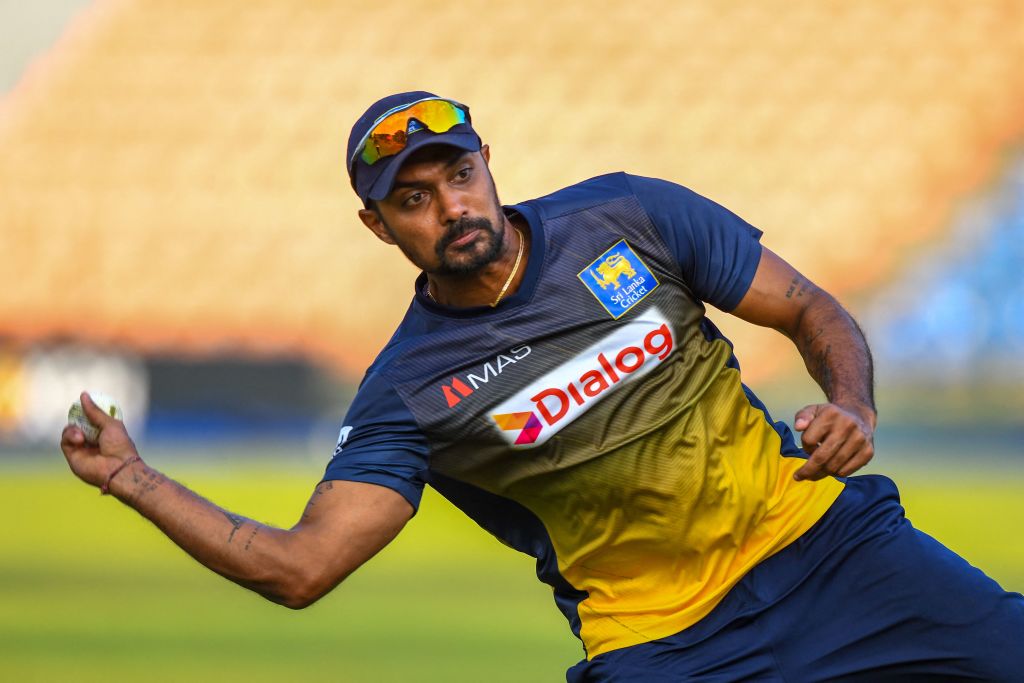 Sri Lanka’s Danushka Gunathilaka throws a ball during a practice session at the Pallekele International Cricket Stadium in Kandy on June 10, 2022. (Photo by ISHARA S. KODIKARA/AFP via Getty Images)
Follow Us

The Sri Lanka Cricket (SLC) said that it is paying for Danushka Gunathilaka’s legal defence in Australia since the charges of sexual intercourse without consent were laid on him while he was on national duty during the ongoing ICC T20 World Cup.

As per ESPNCricinfo, it is not clear if the player has breached the protocols of the board by going on a date during an active tournament, something which is prohibited as per SLC CEO Ashley de Silva. Six days after the incident, SLC has said that it is yet to figure out whether Gunathilaka broke the curfew on November 2, the night to which charges relate.

SLC is not obliged contractually to assist the player’s defence but it is doing so voluntarily. De Silva insists that it will recover all the legal costs from the accused, either by asking Gunathilaka to pay the money to the board or by docking the payment that SLC owes him.

“This was not a private visit. He was with the team in an official capacity, so we felt we should pay the legal fees, on the condition that we can recover them from him later, whatever the results of the case,” said De Silva.

“His parents probably aren’t able to do that (cover the legal costs),” De Silva added.
Gunathilaka has been a part of SL’s white-ball set-up since 2017 and has represented the nation in 47 ODIs, 46 T20Is and eight Tests.

De Silva has compared the board’s backing of Kusal Perera in a doping case for the first six months of 2016 to their support of Gunathilaka now, “Just like we recovered the cost of that case after Kusal Perera was cleared, we will do so here as well.”

But Perera’s case was not criminal and previously there has been no instance of SLC providing official support to players facing criminal charges.

Gunathilaka was ruled out of the tournament on October 19 due to a hamstring injury but was with the squad as a “standby” when the incident allegedly occurred.

Asked if SLC’s own reputation faces damage because of their support for Gunathilaka, de Silva said the board should offer its support “to someone who has fallen into such a situation”.

SLC has appointed a three-member probe for “independent inquiry” of the matter. De Silva said that the team manager is communicating with ICC’s security personnel to find out if the player breached the curfew during that evening.

The board has denied the allegations made by a senior journalist that politicians instructed the board to bear the costs of Gunathilaka’s defence. The board said via a statement on Tuesday that “Sri Lanka Cricket has in no way been influenced by a ‘third party’ in carrying out the obligatory actions required to be taken to allow Mr. Danushka Gunathilaka to pursue any legal rights available to him.”

Later in the statement, it also added that it was “in consultation with the Ministry of Sports and Youth, the Ministry of Foreign Affairs, and the consular officials” to take steps for pursuing Gunathilaka’s legal rights.

Gunathilaka was arrested on Sunday morning from team’s hotel and was charged with four counts of sexual intercourse with no consent. He was not given bail as well. As per de Silva, SLC staff is not in direct contact with the player, apart from the five-minute period around the arrest during which Gunathilaka spoke to team’s manager.