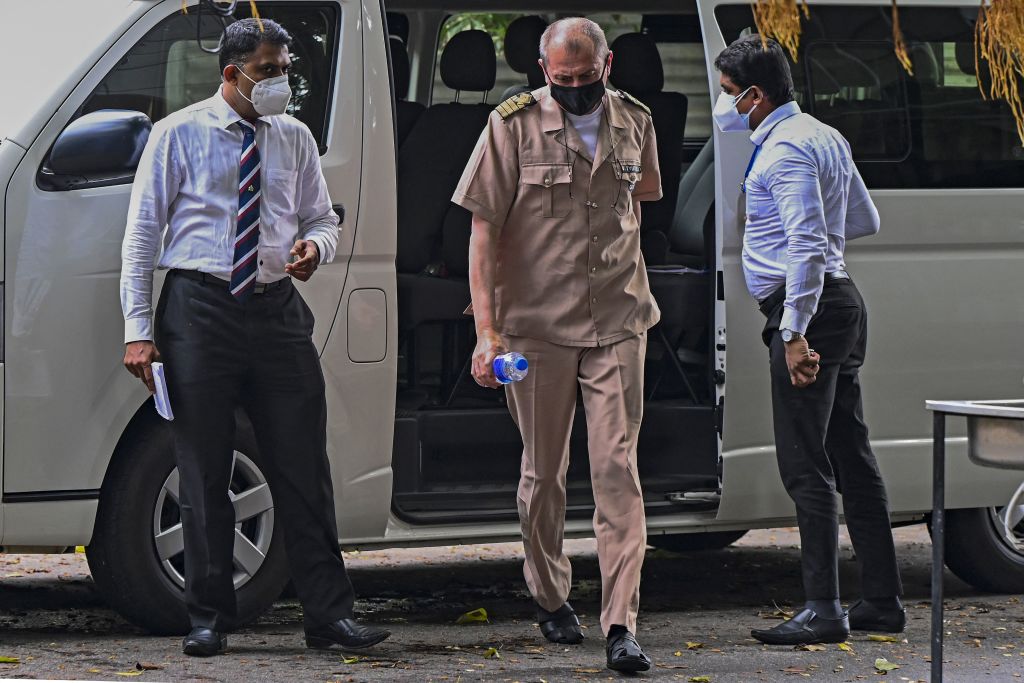 Tyutkalo Vitaly (c), the skipper of the submerged Singapore-registered container carrier MV X-Press Pearl, arrives for a hearing at the Colombo High Court in Colombo on June 14, 2021. (Photo by ISHARA S. KODIKARA/AFP via Getty Images)

THE RUSSIAN skipper of a container ship that caught fire and burned for almost two weeks before sinking off Sri Lanka’s coast has been arrested and is expected to be charged with marine pollution, police said.

The island nation is seeking $40 million (£28.4m) in damages from the operators of the ship, which released tons of plastic raw materials that swamped local beaches in what officials said was the “worst marine disaster” in the country’s history.

Vitaly Tyutkalo, the captain of the Singapore-registered MV X-Press Pearl, was arrested at his hotel in the capital Colombo on Monday (14) and faced the high court before being released on bail.

“No formal charges were laid, but he was produced before the court on suspicion that he has committed an offence under the marine pollution prevention act,” a police official said.

Tyutkalo, whose passport had previously been seized, will return to the court, which has jurisdiction over maritime issues, on July 1, he added.

The passports of the chief engineer, Oleg Sadilenko, who is also a Russian national, and chief officer Peter Anish, an Indian, were also seized. All three were questioned by the police after a criminal probe was launched.

The police told a Colombo magistrate last week the local agent of X-Press Pearl had deleted emails vital to the investigation.

The ship reported an onboard acid leak to its Sri Lanka representative Sea Consortium Lanka, which in turn failed to alert local authorities, the state prosecutor had said.

Sri Lankan environmentalists earlier sued the government and the ship’s operator X-Press Feeders for allegedly failing to prevent the disaster.

The vessel has submerged in seas off Colombo since June 2.

Officials have said that about 1,200 tons of plastic pellets and other debris scooped from the beaches are being stored in 45 shipping containers.