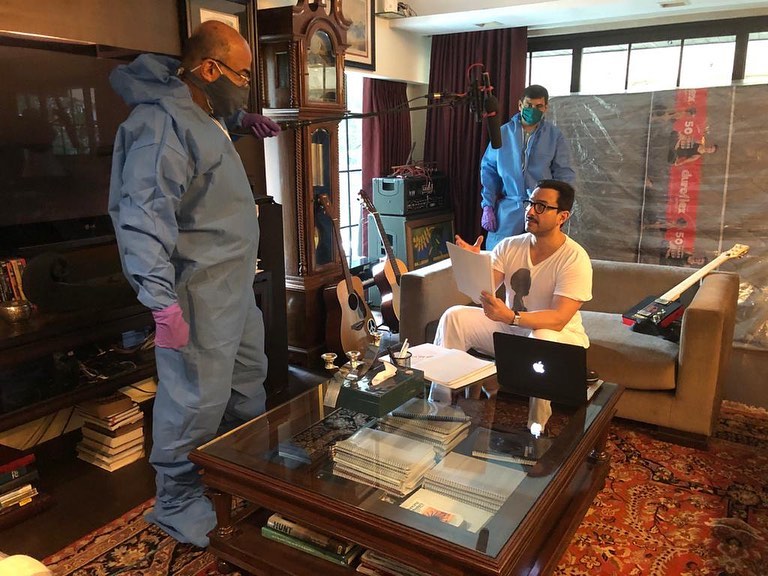 After staying at home with his family since lockdown, Khan has now resumed work on his much-anticipated project. Today, he began dubbing for the high-profile show. Filmmaker Ali Abbas Zafar, who is making his digital debut with the show, shared a sneak peek of the dubbing session.

“Dubbing in the time of COVID-19, Saif Ali Khan with Dilip Subramaniam, the new way of working,” Zafar wrote in his Instagram post. In the picture, Khan is seen sitting on a couch with a script in hand. One person in a PPE suit and mask holds a mic near him, while another person is standing in the background.

Dilli, which was earlier titled Taandav, is a political thriller which revolves around the dark side of politics, murders, sex scandals, and more. As the tentative title suggests, the show is set in Delhi and features Saif Ali Khan in the role of an educated, smart and scheming politician. Dimple Kapadia, Mohammed Zeeshan Ayyub, and Sunil Grover round off the primary cast.

Talking to a newswire, director Ali Abbas Zafar had earlier said that Saif Ali Khan is a delight to work with and that he is a chilled-out guy. “We both know each other from before. He is a director’s actor. I had a fabulous time working with him. He is looking very good in the show. I am very happy with his performance,” he said.

Amazon Prime Video is yet to announce the official premiere date for the show. Interestingly, a second season has already been commissioned by the OTT platform, even as the first season is yet to come out.