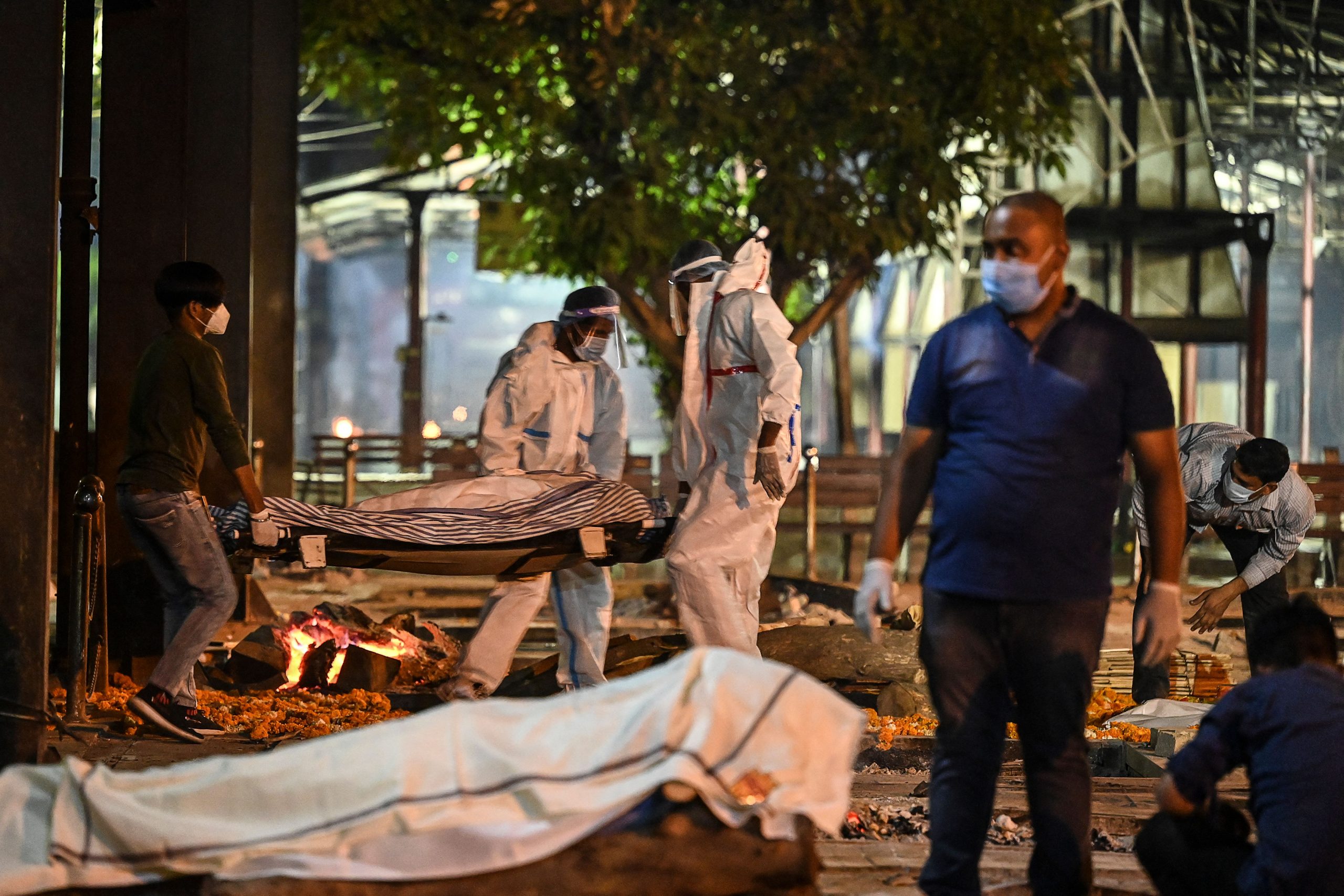 TOPSHOT – Relatives and staff carry a dead body of a Covid-19 victim at Nigambodh Ghat Crematorium, on the banks of the Yamuna river in New Delhi in the early hour of April 22, 2021. (Photo by Sajjad HUSSAIN / AFP) (Photo by SAJJAD HUSSAIN/AFP via Getty Images)
Follow Us

Delhi hospitals issued desperate appeals for oxygen on Friday and 13 Covid-19 patients died in a fire, as India’s healthcare system buckles under a new wave of infections.

The surge, blamed on a new virus variant and recent “super spreader” public events, brought 330,000 new infections — a world record — and 2,000 deaths reported in the past 24 hours.

The latest in a string of fires at hospitals broke out on the outskirts of Mumbai early Friday morning and killed 13 Covid-19 patients, a local official told AFP.

Earlier this week, 22 Covid-19 patients died at another hospital in the same state of Maharashtra when the oxygen supply to their ventilators was disrupted by a leak.

India has recorded more than four million infections this month, dashing hopes at the start of the year that it may have seen the worst of the pandemic.

This belief led the government to lower its guard, allowing most activity to return almost to normal, including weddings and permitting spectators at cricket matches.

The vast Kumbh Mela festival, one of the world’s biggest religious gatherings, held in the city of Haridwar between January and this week, attracted an estimated 25 million Hindu pilgrims, mostly without masks or social distancing.

“The government has been caught with its pants down,” call centre executive Navneet Singh, 38, told AFP.

Many crematoriums and graveyards are struggling to cope. People were desperately queueing outside hospitals and begging for help on social media.

This includes Modi’s home state Gujarat, where patients waited for ambulances, gasping for oxygen, outside overwhelmed hospitals. Many private hospitals there have no cylinders left.

The state’s medical oxygen needs have soared more than 13-fold since the end of March, a senior government official said. In Rajkot, bodies were being cremated in open ground outside the city.

Many parts of the country have now tightened restrictions, with the capital in lockdown and all non-essential services banned in Maharashtra.

The northern state of Uttar Pradesh, home to 240 million people, goes into a shutdown this weekend, as will Karnataka, home to IT hub Bangalore.

The Indian Premier League cricket tournament is still being played, albeit behind closed doors in six Indian cities.

“We are very lucky that we still get a chance to play cricket and entertain people on the outside,” English player Chris Woakes from the Delhi Capitals franchise told AFP.

The United Arab Emirates on Thursday became the latest country to impose travel restrictions on India, suspending flights on one of the world’s busiest air corridors. Canada also halted flights from India as well as Pakistan, which has been badly hit too.

In Sri Lanka, authorities reimposed bans on public gatherings and restricted numbers at funerals as daily infections rose to 800 on Friday. Infections have soared after Sinhala and Tamil New Year celebrations on April 14.

Modi on Friday held a series of crisis meetings on oxygen supplies and the availability of critical medicines.

“If we work as one nation, there will not be any scarcity of resources,” a government statement quoted him as saying, assuring a “continuous effort to increase oxygen supply”.

Hospitals in New Delhi have been posting desperate daily appeals for oxygen to the state and national government.

At least six hospitals ran out of oxygen supplies in the Indian capital late Thursday night before deliveries arrived in the early hours.

Medical oxygen tanker trucks have been doing supply runs around the clock in a number of states and air force transport planes have started airlifting big oxygen tanks around the country.

The first “Oxygen Express” train left the southern industrial hub of Vizag on Thursday, headed for Maharashtra with trucks carrying supplies on board.

The defence ministry said it would fly in 23 mobile oxygen generation plants from Germany within a week.

India has now recorded more than 16 million cases and 187,000 deaths from the coronavirus. Per capita numbers are however much lower than in many other countries.

World Health Organization chief Tedros Adhanom Ghebreyesus said in Geneva that the Indian situation was “a devastating reminder of what this virus can do”.