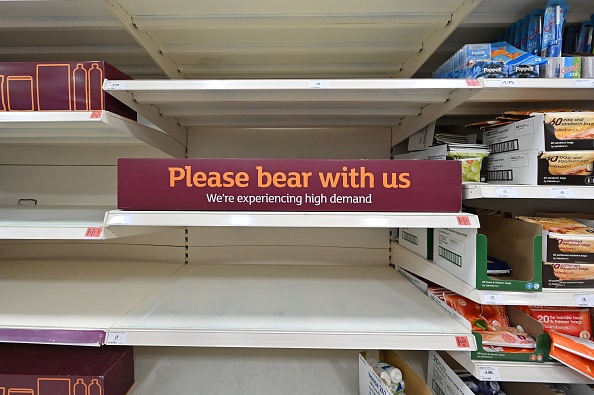 A sign requesting shoppers’ patience about products temporarily out of stock is displayed on empty shelves in a supermarket at Nine Elms, south London on July 22, 2021. – British supermarkets and suppliers warned today of possible food shortages due to staff self-isolating, as rising coronavirus cases threaten chaos after the government controversially eased all restrictions earlier this week. (Photo by JUSTIN TALLIS / AFP) (Photo by JUSTIN TALLIS/AFP via Getty Images)

DOWNING Street and retailers association have urged Britons not to panic buy as some of the biggest UK supermarkets warned on Thursday (22) that the rising number of retail workers being forced to self-isolate is beginning to affect their product availability, leading to fear of food shortage in the country.

Reports of empty shelves at the Big Four grocers – Tesco, Morrisons, Asda and Sainsbury’s, as well as at discounters like Aldi and Lidl, have been pouring-in from across the country after which the government issued a statement asking Britons not to panic.

The spokesman said No10 was “aware of the impact felt by some industries” and the government is “working closely” with firms, particularly on supermarket shelves and food.

“We have a robust and resilient food supply chain in the UK,” Downing Street spokesman said.

Business Secretary Kwasi Kwarteng said the government was “concerned about instances of shortages” and is “ reviewing that situation”.

As record 618,903 people in England and Wales were “pinged” by the NHS Covid app in the week to 14 July, a rising number of retail workers across the country were also being asked to self-isolate.

Supermarkets were already  grappling with a shortfall of around 100,000 lorry drivers before the “pingdemic” but industry experts say this issue is being made worse by staff self-isolating.

Sainsbury’s said it “might not always” have the exact products people wanted, but downplayed fears of shortages saying the problem was not widespread and it is working on alternative products.

“Like all other retailers, the situation is becoming increasingly difficult as we have more and more colleagues having to self-isolate after being notified by the Track and Trace system,” Lidl said in a statement. “Whilst this is starting to have an impact on our operations, our teams are working hard to minimise any disruption to customers.”

A spokesperson for grocery chain Co-op said it was “running low on some products” but “working closely with our suppliers” to restock shelves.

Andrew Selley, chief executive of Bidfood UK, which supplies produce to hospitals, care home and prisons as well as restaurants, said it was asking workers who have been “pinged” to come back to work after they have taken a negative PCR test.

Meanwhile, the British Meat Processors Association said some members were seeing between 5 per cent and 10 per cent of their workforce “pinged” by the app.

It is understood that items such as soft drinks, personal care products such as deodorant and beer are worst affected.

British Retail Consortium (BRC) – the trade association for all UK retailers has assured that supermarkets are working closely with suppliers but also said that the government needs to “act fast”.

Karan Bilimoria, president of the Confederation of British Industry (CBI), said in a statement that against the backdrop of crippling staff shortages, “speed is of the essence”.

CBI has also claimed in a tweet that the “current approach to self-isolation is closing down the economy rather than opening it up”.

The current approach to self-isolation is closing down the economy rather than opening it up. This is surely the opposite of what the Government intended.