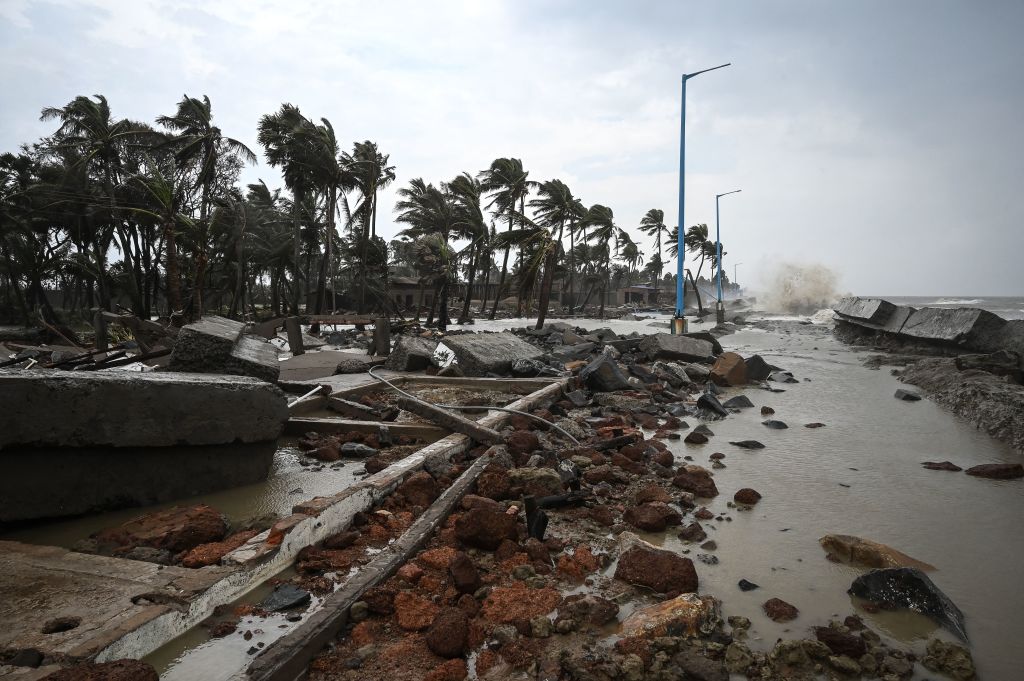 FILE PHOTO: Waves lash over onto a damaged shoreline after Cyclone Yaas hit India’s eastern coast in the Bay of Bengal, at a beach in Shankarpur, some 180 km from Kolkata on May 27, 2021. (Photo by DIBYANGSHU SARKAR/AFP via Getty Images)

TENS of thousands of people have been evacuated in three Indian states ahead of a cyclone expected to smash into the east coast later Sunday (26), authorities said.

Cyclones are a regular menace in the northern Indian Ocean but many scientists say they are becoming more frequent and severe as climate change warms sea temperatures.

Cyclone Gulab is expected to make landfall between the coastal states of Odisha and Andhra Pradesh, bearing gusts of up to 95 kilometres (58 miles) per hour, the state-run India Meteorological Department said.

The storm system from the Bay of Bengal would bring “strong winds and very heavy (and) extremely heavy rainfall”, the weather bureau added in an advisory Sunday.

Odisha and Andhra Pradesh officials ordered tens of thousands of people living along the coast to move to shelters, as hundreds of emergency workers were sent to the region.

Authorities in West Bengal — to the north of Odisha — said Sunday that, while Gulab appeared unlikely to hit the state directly, they were still taking precautions.

“We have so far evacuated more than 20,000 people to schools (and) government offices, which have been turned to cyclone shelters,” Bankim Hazra, a state minister responsible for the low-lying areas, told AFP.

Ganjam, a coastal district, was expected to be badly hit by the cyclone, Jena added in a statement.

In Andhra Pradesh, some 85,000 families were expected to be moved from low-lying areas to temporary relief shelters.

In May, more than a million people were evacuated from their homes along India’s east coast before it was battered by Cyclone Yaas with winds gusting up to 155 kilometres (96 miles) an hour — equivalent to a category two hurricane.

At least 20 people were killed and tens of thousands were displaced in the storm, which caused widespread damage worth more than $2 billion in Odisha and West Bengal states and in neighbouring Bangladesh.