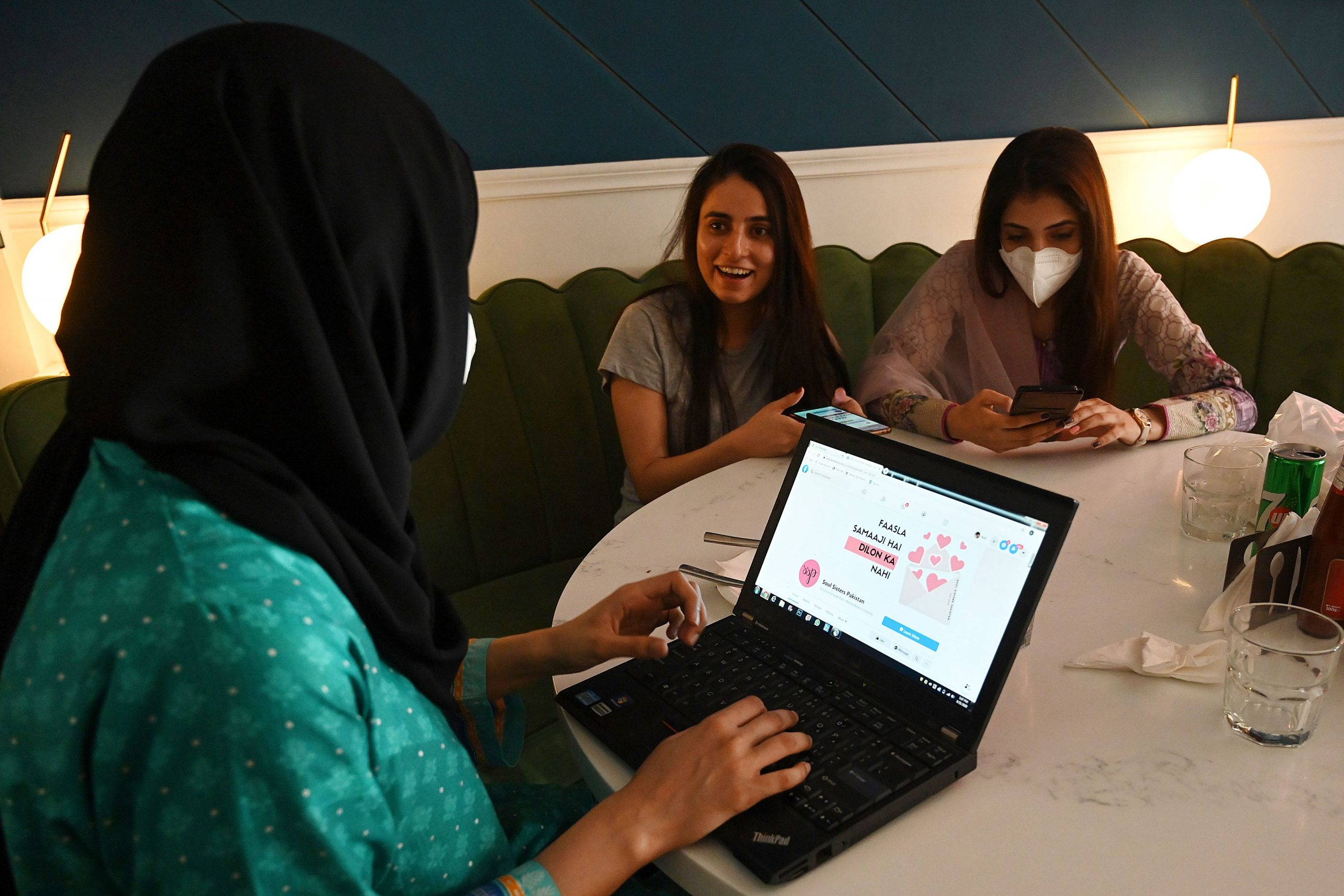 Women discuss as they check out the social online group ‘The Soul Sisters Pakistan’ on their Facebook page, in Lahore. (Photo by ARIF ALI/AFP via Getty Images)

“Women in Pakistan are really, really strong. We have a voice. We just don’t have enough spaces to use that voice,” says Kanwal Ahmed, an agony aunt to some 260,000, determined to change the situation.

Her female-only online hub sees traditionally taboo topics such as sex, divorce, and domestic violence discussed freely in a conservative country where there are few avenues for women to discuss personal problems.

“I wanted it to be the kind of place where women really opened up without the fear of being attacked or harassed or judged,” Ahmed, explains of her ‘Soul Sisters Pakistan’ network on Facebook.

The former make-up artist spotted the need for a safe space after spending time soothing nervous brides as they confided in her from the salon chair.

The 31-year-old says her group is somewhere women can “talk about things that they weren’t supposed to talk about in society” because they are deemed inappropriate or shameful.

In 2018, Facebook selected Ahmed as one of 115 “Community Leaders” using the social network to help others. Chosen from a pool of 6,000 applicants, she received a grant to further develop her project.

Soul Sisters Pakistan members say they can speak openly about issues — such as maternal and mental health, body image and reproductive rights — with a candour that is impossible in the real world.

No excuse for abuse

One of the most discussed topics is domestic violence, which is common in the patriarchal country.

Data from the Human Rights Commission of Pakistan and the Pakistan Journal of Medical Sciences suggests 90 per cent of women in Pakistan have experienced some form of domestic abuse.

Ahmed says many people do not take the problem seriously — even when wives confide in other family members about abuse.

“It is very common for them to be told that they are being too sensitive or to compromise. They aren’t given other options,” Ahmed explains, adding that women should not have to bear abuse for any reason.

According to the UN, Pakistan has a lack of access to affordable services in “sectors such as health, police, justice and social support” to ensure female safety and protection.

Soul Sisters offers informal help to users, ranging from legal advice to emotional support from other members, who call themselves Soulies.

A recent thread, #MyBodyIsNotASecret, underlines the changing norms of a generation that has seen the global impact of the #MeToo movement, progress in body positivity, and a backlash against traditional beauty standards and colourism.

“There is a lot of shame associated with a woman’s body, with the general bodily functions even. They are not talked about,” Ahmed says.

One member shared her struggle with the medical condition vaginismus, which helped others identify their own symptoms.

Ahmed says she lost a family friend to breast cancer after the disease went undiagnosed and untreated for too long because she was “too ashamed to talk about her body with anyone.”

“This isn’t a new story. This is something that happens to a lot of women,” Ahmed insists.

The group provides a welcome respite for its members, who frequently face online abuse when they post publicly and encourages women to share success stories as well as problems.

But the diverse narratives have also brought a range of criticism.

Ahmed has been accused of promoting divorce and “wild” behaviour, even as more progressive voices have slammed the group for allowing conservative views to be shared.

Her work is challenged from “almost every angle”, Ahmed says, pointing to an element of internalised misogyny among some members.

But she says her aim is not to “serve a small niche”, rather to shatter stereotypes and break norms.

“If people were already well aware, we wouldn’t need spaces like this. It’s exhausting, frustrating and takes every drop of my strength to keep continuing.

“But every time someone changes their mind or we get success stories — instant gratification!” she tweeted recently.

Ahmed and her team try to handle conflicts sensitively — allowing a wide range of views to foster dialogue and debate — an approach that has seen membership swell.

We “just try to tell the women to be who they are, to not be ashamed of being themselves, to speak their minds,” she says.

Splinter groups have struggled to achieve a fraction of Soul Sisters Pakistan’s success or reach — she says there are three to six million conversations on the site each month.

Ahmed used her Facebook grant to launch an online talk show in a bid to win a wider audience — with each episode getting hundreds of thousands of viewers.

The coronavirus pandemic has halted production and Ahmed recently moved to Canada so the programme is on hiatus.

But she is committed to challenging a society “scared of women with a voice”.

She adds: “The lack of acknowledgement about issues women face in society is horrific.”