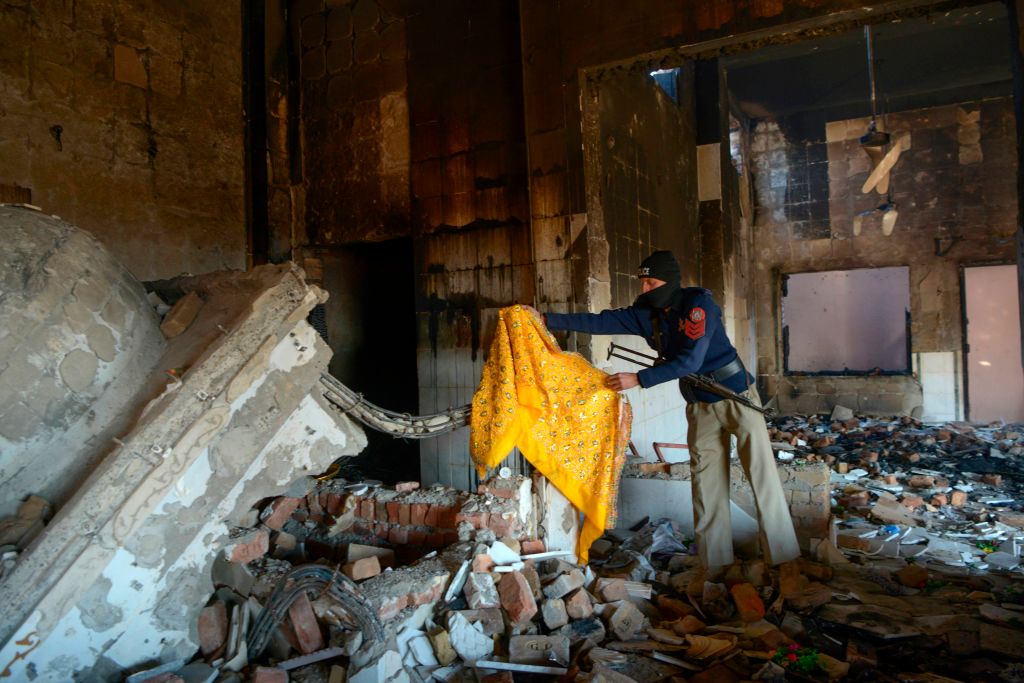 A file photo of a policeman inspecting a burnt Hindu temple a day after a mob attack in a remote village in Karak district, some 160 km southeast of Peshawar on December 31, 2020. Hundreds of people attacked and set fire to the temple in northwest Pakistan on December 30, police and witnesses said. (Photo by ABDUL MAJEED/AFP via Getty Images)

FETCHING drinking water from a mosque in Pakistan’s Punjab province landed a family of poor farmers from the minority Hindu community in trouble as some people “tortured and held them “hostage” for “violating the sanctity” of their place of worship, a media report said on Monday (20).

Alam Ram Bheel, a resident of Punjab’s Rahimyar Khan city, was picking raw cotton along with his other family members, including his wife, in a field when the alleged incident took place. Bheel said when the family went outside a nearby mosque to fetch drinking water from a tap, some local landlords beat them up, the Dawn newspaper reported.

When the family was returning home after unloading cotton, the landlords “held them hostage” at their dera (outhouse) and “tortured” them again for “violating the sanctity” of the mosque, it said.

The police did not register a case as the attackers were related to a local parliamentarian of prime minister Imran Khan’s ruling Pakistan Tehreek-e-Insaf (PTI) party, Bheel said.

Protesting the police apathy, Bheel held a sit-in outside the police station along with another clan member Peter John Bheel.

Peter, also a member of the district peace committee, said that they approached ruling PTI lawmaker Javed Warriach who helped them lodge a case on Friday (17).

Peter requested other members of the district peace committee to call an emergency meeting over the issue but they did not take the matter seriously, the report said.

PTI’s south Punjab minority wing secretary-general Yodhister Chohan said he was aware of the incident but preferred to stay away.

District police officer Asad Sarfraz said he was looking into the matter.

Asked about the ‘inactive’ peace committee, the officer claimed it was “fully functional.”

Farooq Rind, a senior lawyer and former district bar president, said he also belonged to the Basti Kahoor area where the Bheels had been living for more than a century. He said most of the clan members were farmworkers and “extremely poor”.

Rind said the accused landlords were notorious for picking fights with other villagers over petty issues. He promised free legal aid for the complainant family, the report said.

A majority of Pakistan’s Hindu population is settled in the Sindh province where they share culture, traditions and language with Muslim residents. They often complain of harassment by extremists.