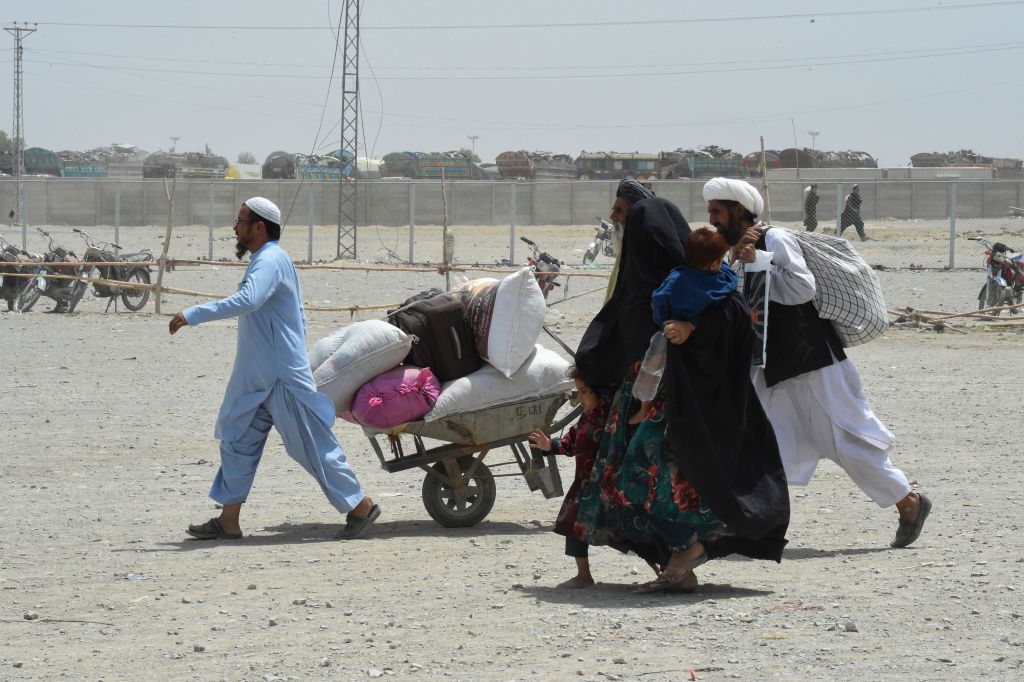 People walk towards a border crossing point in Pakistan’s border town of Chaman on July 17, 2021, after Pakistan partially reopened its southern crossing with Afghanistan, shut off since the Taliban seized control of a strategic border town on the other side. (Photo by BANARAS KHAN/AFP via Getty Images)

PAKISTAN on Saturday (17) partially reopened its southern crossing with Afghanistan, shut off since the Taliban seized control of the strategic border town on the other side.

Thousands of Afghans were left stranded in the Pakistani town of Chaman after militants captured Spin Boldak from Kabul’s forces on Wednesday (14), as part of a rapid offensive which has left the government facing a crisis.

“We have opened the Chaman border… allowing crowds of up to 4,000 Afghans including women and children to cross over to Afghanistan to celebrate Eid al-Adha with their families, purely on humanitarian grounds,” a border official, who did not want to be named, said.

People would be allowed to cross until the evening, with the possibility the border would open again on Sunday (18), the official added.

Muhammad Tayyab, a local paramilitary official, said the decision was taken because of “relative calm on the other side”, but said the crossing would remain closed to trade.

Qudratullah, 30, who lives in neighbouring Kandahar province in Afghanistan was returning after taking his father to Karachi for a heart bypass three months ago.

“I have to come back (to Pakistan) for a routine check-up of my father, but let’s see if I am able to come back or not,” he said.

Muhammad Khan, 50, who works as a labourer in Quetta, said he had been waiting at the border trying to reach Afghanistan for Eid.

“I will definitely try to come back after Eid because there is unemployment in Afghanistan and I will not be able to get any job there,” he said.

Afghan forces on Friday (16) launched an operation to try and take back control of Spin Boldak.

Following fierce skirmishes, dozens of wounded Taliban fighters were brought across the border and were being treated at a Pakistan hospital.

On Saturday (17), the Taliban’s white flags could still be seen flying over the crossing.

It follows weeks of intense clashes across Afghanistan, with the Taliban capitalising on the last stages of the US troop withdrawal to launch a series of lightning offensives, overrunning districts at a staggering rate.

The group has also taken other vital border crossings with neighbouring countries in the north and west.