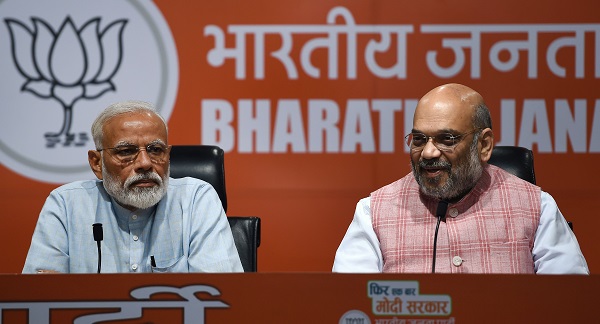 OPPOSITION leaders took swipes at prime minister Narendra Modi for not taking any questions at a press conference and diverting them to Bharatiya Janata Party (BJP) chief Amit Shah on Friday (17).

“Development is asking: Did you see the prime minister’s first press conference. It looks like the last episode of ‘Mann ki Baat’ has been telecast on Television instead of the Radio

“Poor media-persons kept sitting with their questions as the ‘disciplined soldier’ maintained silence,” he said on Twitter.

He tagged along with a news report quoting Amit Shah as saying that “even journalists joined the ‘Main Bhi Chowkidaar’ campaign”.

“The allegations were squarely on the prime minister and he should have responded to the question. It seems they are hiding something,” he said.

Addressing his first press conference along with BJP chief Amit Shah after coming to power in 2014, prime minister Narendra Modi asserted on the last day of campaigning last week that the BJP will come back to power with a full majority, but refused to take any questions, citing party discipline.

The Congress mocked prime minister Narendra Modi for not taking any question in his first appearance at a press conference, with party president Rahul Gandhi on Friday (17) saying “showing up is half the battle”.

“Congratulations Modi Ji. Excellent Press Conference! Showing up is half the battle. Next time Mr Shah may even allow you to answer a couple of questions. Well done,” Gandhi had tweeted.

Gandhi said it is “very impressive” to see the PM address his first press conference a few days before the Lok Sabha election results are out.

“The PM’s first press conference is coming four-five days before the election results. The PM is accompanying Amit Shah in the press briefing. It is unprecedented. Very good.

“I am told the doors have also been shut, as journalists who want to ask questions have been blocked. It is a great press conference,” he told reporters at his press conference that coincided with that of Shah, where PM Modi was also present.

Former home minister and senior leader P Chidambaram said, “PM ‘addresses’ press conference. Who is the wit who said ‘silence can be eloquent’? PM’s press conference was proof of that statement.”

“I think PM was present at the press conference to send the message that, if the election results go wrong, the person to take the blame will be Mr Amit Shah,” he said.