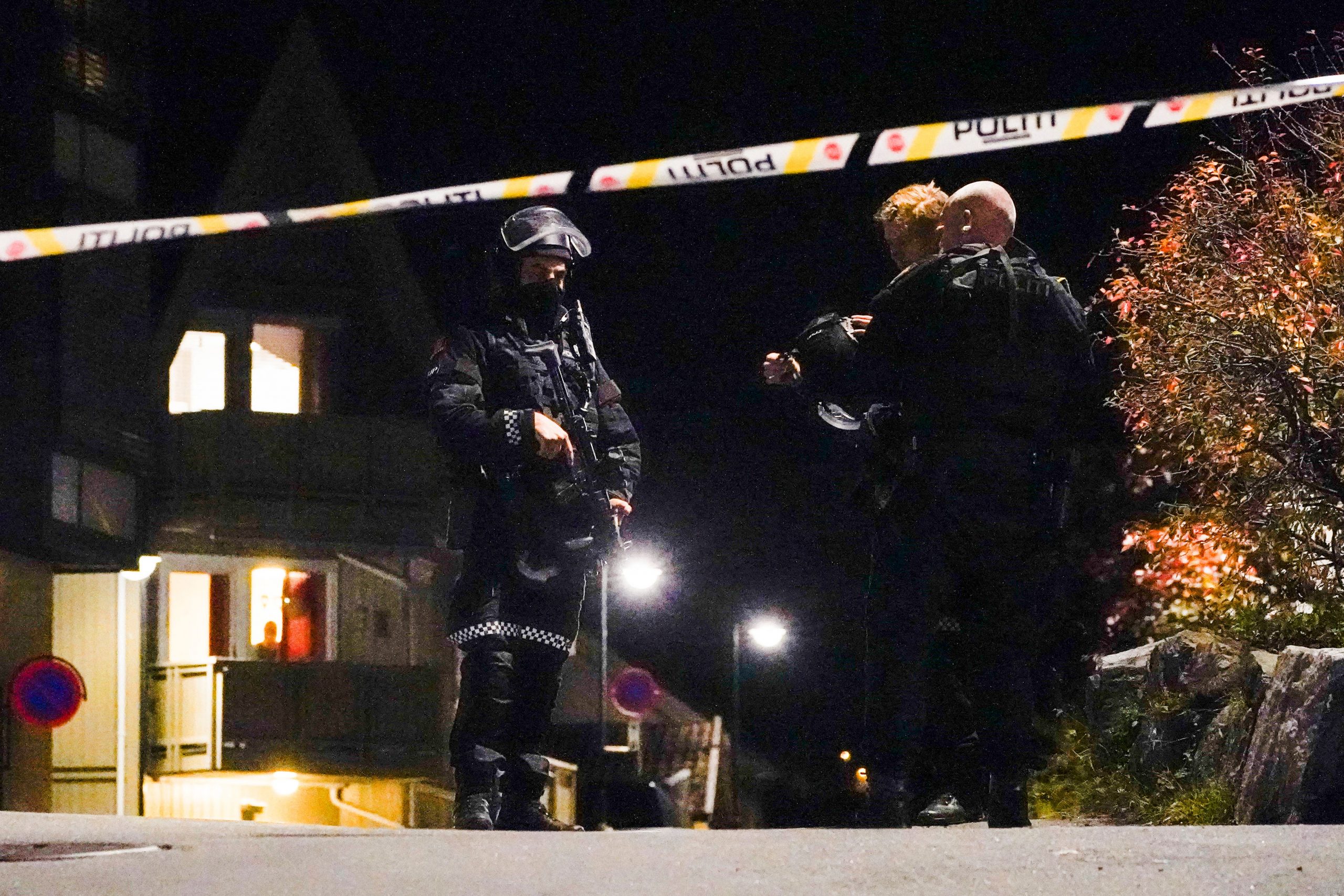 Police officers cordon off the scene where they are investigating in Kongsberg, Norway after a man armed with bow killed several people before he was arrested by police on October 13, 2021. (Photo by HAKON MOSVOLD LARSEN/NTB/AFP via Getty Images)

A Danish man suspected of killing five people with a bow and arrows in Norway had converted to Islam and was previously known to police over fears that he had radicalised, officials said on Thursday (14).

Five people were killed — four women and one man — aged between 50 and 70 — and two others were injured on Wednesday in the town of Kongsberg in Norway’s deadliest attack in a decade.

Saeverud said the 37-year-old suspect had confessed during questioning.

“We are investigating among other things to determine whether this was a terrorist attack,” he added.

Reports that linked him to radicalisation pre-dated this year, Saeverud said, and police had followed up at the time. “We haven’t had any reports about him in 2021, but earlier,” he said.

“We’re relatively sure that he acted alone.”

Murder in Norway is rare.

It was the deadliest attack in the Scandinavian country since far-right extremist Anders Behring Breivik killed 77 people in 2011. Since then, Norway has seen one other far-right attack, carried out by a self-proclaimed neo-Nazi who opened fire into a mosque.

After Wednesday’s attack, Denmark’s Prime Minister Mette Frederiksen said it was “with great sadness” that she had heard about the “terrible attack” in the south-eastern Norwegian town of Kongsberg.

“My thoughts and deepest sympathies go to the victims and their loved ones,” she said.

UN Secretary General Antonio Guterres meanwhile said on Twitter he was “shocked and saddened by the tragic news coming from Norway.”

The suspect was due to go before a judge on Thursday or Friday for a custody hearing, his lawyer told AFP.

“He is explaining in detail and he is speaking and cooperating with the police,” the lawyer, Fredrik Neumann, told reporters earlier.

The victims have not yet been named publicly, but one of the wounded was an off-duty police officer who had been in a store, one of the places attacked.

Norwegian media also wondered why it took police more than a half-hour after the first reports of the attack to arrest the suspect.

A witness, identified only as Hansine, told TV2 she had heard a disturbance, then saw a woman take cover and “a man standing on the corner with arrows in a quiver on his shoulder and a bow in his hand”.

“Afterwards, I saw people running for their lives. One of them was a woman holding a child by the hand,” she said.

Images in the media showed a black arrow sticking out of a wall and what looked like competition-grade arrows lying on the ground.

Police said Thursday the suspect had also used other weapons.

Norwegian police are not normally armed, but after the attack, the National Police Directorate ordered that officers be armed nationwide.

Breivik first set off a bomb in Oslo next to the building that housed the office of the prime minister, then went on a shooting spree at a summer camp for left-wing youth on the island of Utoya.

In August 2019, self-proclaimed neo-Nazi Philip Manshaus opened fire into a mosque on the outskirts of Oslo before being overpowered by worshippers, with no one seriously injured.

He earlier shot dead his step sister, who had been adopted from China, in what prosecutors termed a “racist act”.