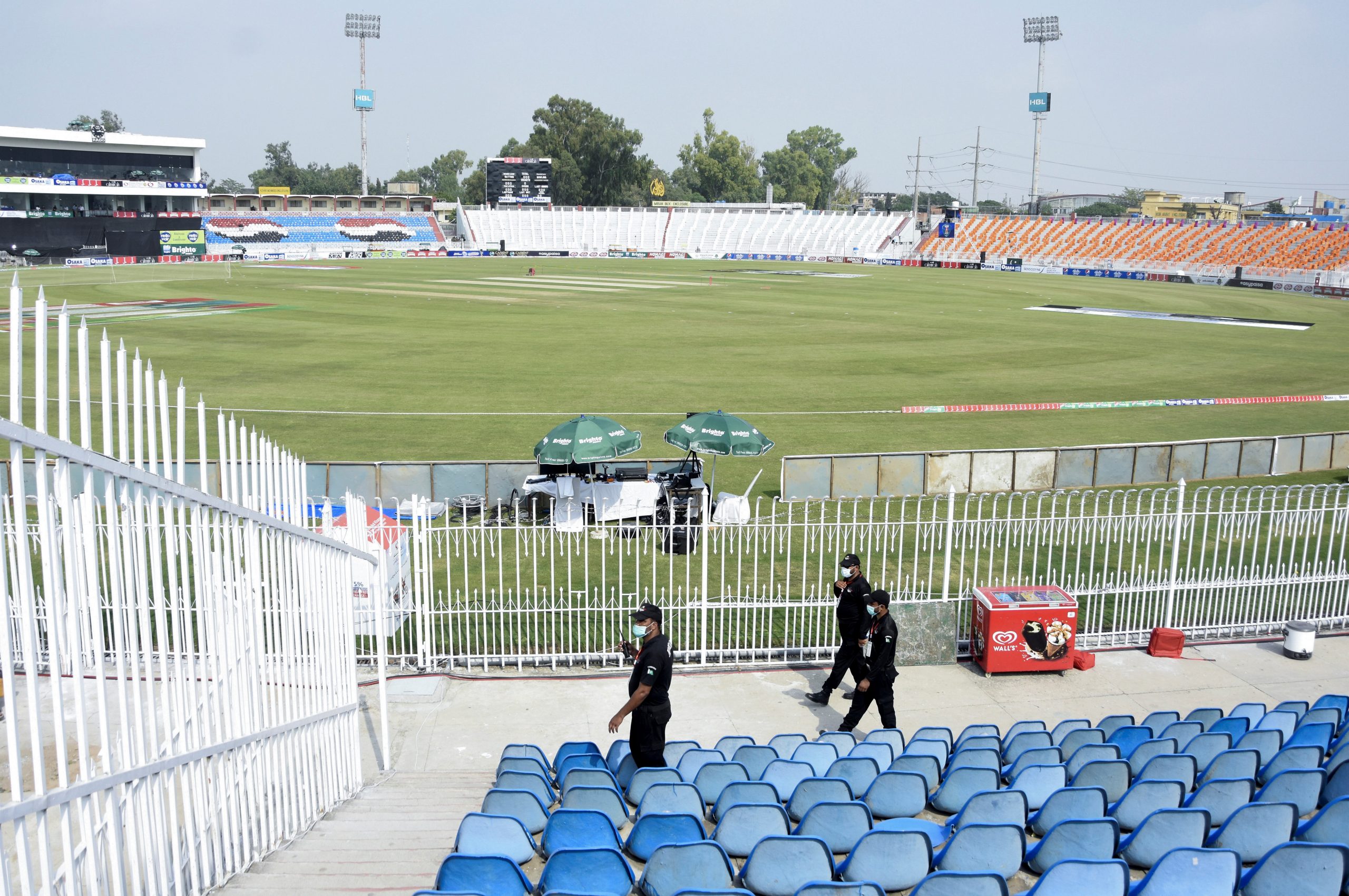 Members of the Police Elite Force walk in an enclosure at the Rawalpindi Cricket Stadium after New Zealand team pulled out of the tour over security concerns. (REUTERS/Waseem Khan)

NEW Zealand Cricket officials on Saturday (18) threw a veil of secrecy over the security threat that forced the abrupt cancellation of their Pakistan tour.

The cancellation is a huge setback for Pakistan, which has been trying to revive tours by foreign sides after home internationals were suspended in the aftermath of a terror attack on the Sri Lankan side in 2009.

The announcement on Friday (17) that the series had been called off came just as the first one-day international was due to start at Rawalpindi Stadium, 10 kilometres (six miles) from the team hotel in Islamabad.

In a brief public statement, Ardern said the New Zealand government supported the cancellation as “player safety has to be paramount”.

The foreign ministry, which has been in contact with New Zealand Cricket, said there was an “ongoing and significant threat from terrorism throughout Pakistan” but would not comment on specific security concerns.

When New Zealand Cricket first announced it was abandoning the Pakistan tour, it said the decision followed “a New Zealand government security alert” and advice from its own security advisers.

The side previously cut short a tour in 2002 after a suicide bombing outside their team hotel in Karachi killed 14 people, including 11 French naval engineers.

A New Zealand Cricket official said no further comment was planned “at this juncture” and would not say if the security threat that caused the cancellation had been passed to the Pakistan Cricket Board or any other cricket-playing nation.

The England and Wales Cricket Board has said it will decide in the next 48 hours whether to withdraw from a tour planned for next month, while the West Indies and Australia are also scheduled to tour in the next six months.

New Zealand were in Pakistan for the first time since 2003 and were due to play three ODIs, followed by five Twenty20 matches.

New Zealand’s decision to call off their series in Pakistan is not the first time the global cricket calendar has been upended by an abandoned tour. Here are five call-offs that rocked the game.

1968 – The D’Oliveira Affair: Basil D’Oliveira, who as a ‘Cape Coloured’ was unable to play cricket in his native South Africa due to apartheid, came to Britain and eventually forced his way into the England side.

Despite his superb 158 against Australia at the Oval in the final Test of the 1968 Ashes, D’Oliveira was dramatically omitted from the England squad for the tour of South Africa, sparking a huge furore.

Yet when Tom Cartwright, a bowler, withdrew from the squad through injury, he was replaced by D’Oliveira, a batting all-rounder.

John Vorster, South Africa’s prime minister, responded to D’Oliveira’s inclusion by threatening to refuse him entry into the country, saying: “The MCC (England) team is not the team of the MCC but of the anti-apartheid movement.”

MCC then called off the tour because of attempts to influence the selection of their squad, sparking South Africa’s more than two decades of isolation from international cricket.

2009 – Sri Lanka in Pakistan: Sri Lanka were on the way to the Gaddafi Stadium in Lahore to play the third day of the second Test against Pakistan when their team bus was attacked by armed militants, who killed eight people, with several players and officials wounded.

“We hid in the aisle of the bus, everyone on top of each other really, and then the shooting started…And for some reason, I don’t know why, we all survived.”

The attack led to Pakistan becoming a ‘no-go’ zone for major international cricket sides, with “home” matches having to be played in the United Arab Emirates instead.

2020 – England in South Africa: England abandoned their one-day tour of South Africa following a lack of confidence in the biosecure bubble the two teams were living in as a response to the Covid-19 pandemic.

The first one-day international was postponed at an hour’s notice due to one of South Africa’s players testing positive for Covid-19. Attempts to get the game going on other days were thwarted by two hotel staff, and then two of England’s party, also testing positive – although by the time these turned out to be false positives the series had been postponed.

2021 – India in England: Earlier this month, with India 2-1 up and on the brink of a historic series win, the fifth and deciding Test against England in Manchester was dramatically cancelled just over two hours before the scheduled start because of Covid-19 concerns in the tourists’ camp.

A reported positive test by a second physiotherapist appeared to be the last straw for an India squad already without head coach Ravi Shastri, and two other backroom staff, who had all previously contracted the coronavirus.

India’s decision left English cricket facing a £40 million ($55 million) ‘black hole’, with the result of the series set to be decided by the International Cricket Council.

2021 – New Zealand in Pakistan: New Zealand abandoned a white-ball series in Pakistan just as the first one-day international in Rawalpindi was about to start on Friday (17) on security grounds, citing advice from the New Zealand government and their advisors on the ground.

New Zealand Cricket chief executive David White said Pakistan had been “wonderful hosts”, but added “player safety is paramount and we believe this is the only responsible option”.

But newly-installed Pakistan Cricket Board chairman Ramiz Raja, a former Pakistan captain, tweeted: “Walking out of the tour by taking a unilateral approach on a security threat is very frustrating. Especially when it’s not shared!!”

Raja added: “Which world is NZ living in?? NZ will hear us at ICC.”