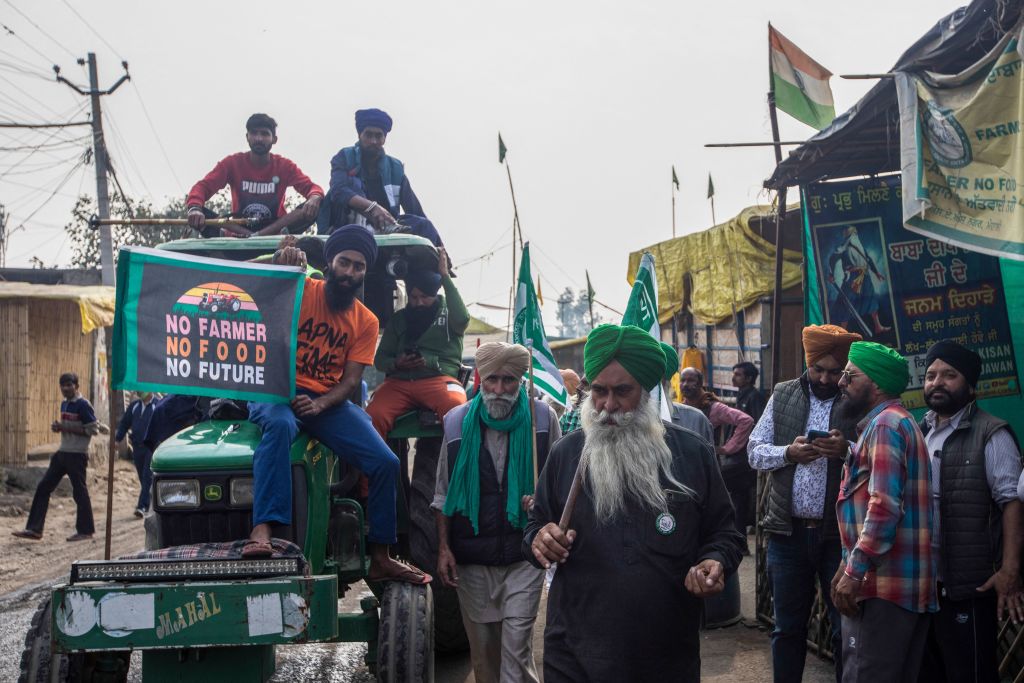 Farmers celebrate after India’s Prime Minister announced to repeal three agricultural reform laws that sparked almost a year of huge protests by farmers across the country in Singhu on November 19, 2021. (Photo by XAVIER GALIANA/AFP via Getty Images)

A network of fake social media profiles of people claiming to be Sikhs and promoting divisive narratives, which included 80 accounts, has been exposed, the BBC reported.

A new report has identified these profiles and have now been suspended, the report added.

According to the report’s author Benjamin Strick, the target was to “alter perceptions on important issues around Sikh independence, human rights and values.”

The BBC report, however, added that there is no evidence linking this network directly with the Indian government.

The network used so-called “sock puppet” accounts, which are fake ones controlled by real people posing as independent individuals, rather than automated “bots”.

The fake profiles used Sikh names and claimed to be “Real Sikhs”. They used the hashtags #RealSikh to endorse, and #FakeSikh to discredit, different political viewpoints.

The report, from non-profit organisation the Centre for Information Resilience (CIR), found many of the accounts in the network used the same fake profiles across several platforms. These accounts shared the same names, profile pictures and cover photos, and published identical posts.

Many of the accounts used profile pictures of celebrities, including actresses in the Punjabi film industry.

The BBC contacted eight of the celebrities whose images had been used, one replied via their management to confirm they were not aware their image had been used in this way, and said they would take action.

The management of another celebrity said there are thousands of such fake accounts associated with their client, and there wasn’t much they could do about it.

The farmers’ protests, which started a year ago this week, and the decades-old Khalistan independence movement were the two discussion topics most frequently targeted by the network.

According to the report, the accounts sought to label any notion of Sikh independence as extremist, and delegitimise the farmers’ protests, claiming they had been hijacked by “Khalistani terrorists”.

“We believe these accounts were set up at the behest of the government and it was done to set a narrative against the protests” Jagjit Singh Dalewal, leader of the Bharatiya Kisan Union, one of about 30 unions sitting in protest, was quoted as saying by the BBC.

Some accounts painted diaspora communities in the UK and Canada as harbouring the Khalistani movement.

The accounts had thousands of followers, and posts from the network have been liked and retweeted by real influencers and quoted on news sites.

The research identified posts which were interacted with and endorsed by the verified accounts of public figures, the BBC report added.

The report also identified content from the fake profiles embedded on news blogs and commentary sites.

Very little of the content included text in Punjabi – the biggest language for Sikhs in India – and nearly all the content was in English.