The Germany-based artist has delivered three songs so far, including his recent release
Tumka Laga Ke – Shake Ya, and has big plans for the future. Eastern Eye got the talented
newcomer to go through his music collection and select 10 songs he loves…

Bin Tere from I Hate Luv Storys: A great track from the Bollywood movie by the great Shafqat Amanat Ali Khan. Shafqat uncle’s voice is so soulful and I love the way he sang this. His live rendition of it is also amazing.

Jump by Aman Khan Ft. Shizzio: Produced by Kami K and featuring British artist Shizzio,
Jump was the first composition I wrote years ago and then made my debut with it in 2016.
It really meant a lot to me when the single was finally released as it was the first song that put me into this industry I love.

Ride It by Jay Sean: Produced by Alan Sampson, this great song was so amazing. It was the first time I heard a brand new and fresh sound from Jay. In my opinion, it is one of the best r’n’b songs ever made.

Tumka Laga Ke – Shake Ya by Aman Khan: This is my most recent release and one I am immensely proud of. I always wanted a slow r’n’b kind of a song and music producer Kami K made it possible. Respect to him as he has done a great job.

Hai Raaba by Udit Narayan: An interesting song produced by the great AR Rahman. I’m a big fan of Udit Narayan ji and this song always reminds me of my childhood and I still remember dancing to it.

Slow Down by Bobby V: This is a top track from someone who I have been inspired by
and is one of my favourite singers. I love the lyrics and especially the beat.

Dance With You (Nachna Tere Naal) by The Rishi Rich Project: Jay Sean, Rishi Rich and Juggy D came together for this top track. They inspired me to write my debut single Jump. I loved the mix of r’n’b and bhangra on this song. Jay Sean is one of my favourite artists and was really great on this song.

Main Nai Jaana Khedeya De Naal by Shafqat Amanat Ali Khan: It’s so soulful the way
Shafqat uncle sings this song. For me, it was the best song from a great album.

Barson Ke Baad from Anjaam: There are lots of good old songs including this one, which is attached to memories of my mother.

Kal Ho Naa Ho title track: Sonu Nigam shines on a song that features in one of my favourite Bollywood movies, and yes I’m a big Shah Rukh Khan fan. I love the message in this song and it always brings back great memories. 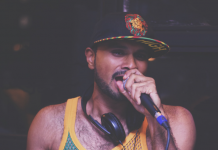 My playlist with General Zooz