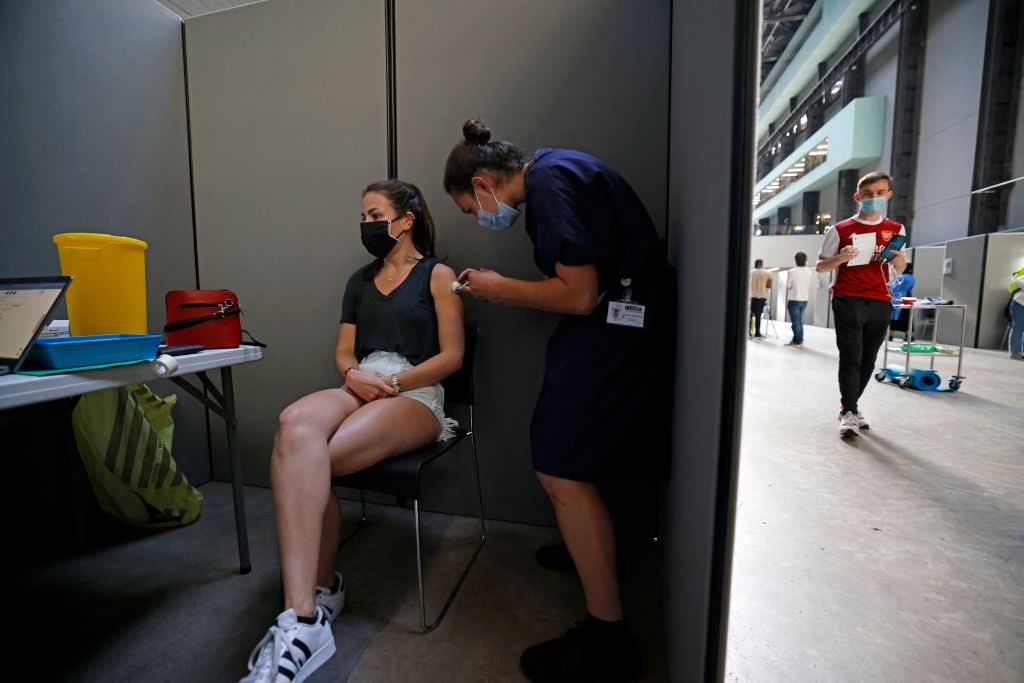 A member of the public receives a Covid-19 vaccine dose in the Turbine Hall at a temporary Covid-19 vaccine centre at the Tate Modern in central London. (Photo by TOLGA AKMEN/AFP via Getty Images)

AN analysis of NHS test and trace data has revealed a steep decline in the proportion of positive tests being analysed for variants among people arriving from red list countries.

Following the report, a cross-party group of MPs has warned that the government is “opening the floodgates” to new versions of Covid in England, reported the Guardian.

The study was done by the House of Commons library, commissioned by the chair of the all-party parliamentary group (APPG) on coronavirus Layla Moran.

There were an estimated 1,769 to 1,827 positive tests from people entering the UK from red list countries, of which somewhere between 63 per cent and 68 per cent were sequenced to determine the variant involved in the three weeks to 17 March.

However, in the three weeks to 30 June, there were an estimated 445 to 507 positive tests from people entering the UK from red list countries, with estimates of the proportion sequenced ranging from 12 per cent to 33 per cent, the study has revealed.

The analysis also revealed that sequencing of positive test results from people entering the UK from amber list countries had fallen in the same period.

“These figures are truly staggering and make a mockery of the UK government’s claim to be a global leader in genome sequencing,“ Moran told the Guardian, adding the rise in the Beta variant in Europe should “be setting alarm bells ringing in government”.

“Yet instead ministers are dismantling our defences against the virus and opening the floodgates to new variants,” she said.

The Beta variant was first detected in South Africa, and has also been found in the UK but did not take off. However, concerns about a rise in the variant in France and its territories prompted the UK government to announce even fully vaccinated people entering England from France would continue to need to quarantine for 10 days.

Moran said: “It seems that vital lessons have still not been learned from the failure to prevent the Delta variant taking root in the UK. The government must urgently fix this scandal and step up the sequencing of test results, before more dangerous Covid variants slip through the net.”

Prof Francois Balloux, the director of the UCL Genetics Institute, said sequencing of positive tests, and in particular those from incoming travellers, was an important tool to monitor the evolution of the viral population and flag possible new variants of concern.

However, Prof Ravi Gupta of the University of Cambridge, a co-opted member of the New and Emerging Respiratory Virus Threats Advisory Group (Nervtag), has suggested that in the UK’s current situation, the decline was not a cause for worry.

“Ideally imported infections would be sequenced,” he told the Guardian. “In the current climate of transmission of the immune evasive and highly infectious Delta variant, it seems unlikely that a new variant will threaten to overtake Delta in the coming months and therefore I believe the risk is low at present.”

A government spokesperson said the UK was a world leader in genomics with more than 600,000 positive Covid-19 samples having been genomically sequenced during this pandemic.

“Our top priority has always been protecting the public and the vaccine programme and our robust border regime are combining to minimise the risk of new variants coming into circulation in the UK,” they said.