A number of dignitaries, including Sir Stephen Timms, the Member of Parliament from East Ham, and Thavathuray Jeyaranjan, the mayor of Redbridge, attended the event. 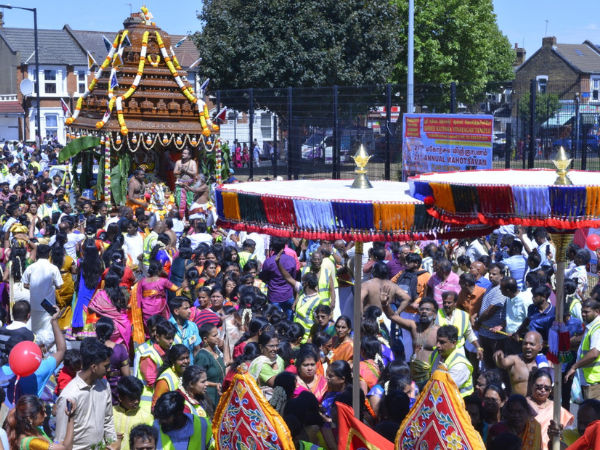 THE ‘Ther’ annual chariot festival of the London Sri Murugan Temple was held with fanfare on Sunday (24) at East Ham in the British capital. The event saw participation of more than 15,000 people on Eastham Street and the colourful celebrations were a spectacular treat for the eyes.

The chariot of Lord Murugan, which came out on the way during the day, was stopped midway for the devotees to offer their special puja.

This year, a number of dignitaries took part in the festival and among them were — Sir Stephen Timms, the Member of Parliament from East Ham; Thavathuray Jeyaranjan, the Mayor of Redbridge and his fellow councillors; 12 councillors of Newham, among others.

The Sri Murugan Temple executive committee ensured that arrangements were in place for the festival.

S Sampathkumar and P Dakshinamoorthy, president and secretary of the committee, respectively, thanked the Metropolitan Police and London Ambulance Service for deploying more than 25 police officers and four ambulance vehicles with staff members for the event.

Sri Murugan Temple, which organised its first chariot festival way back in 1984, has come a long way since then. The festival is held every year in the Tamil month of Adi when the monsoon kicks off. The seed for the temple was sown in 1975 by a group of people who realised the religious and cultural needs of the south Indian and Tamil-speaking community and they formed a congregation that acquired the site in Church Road, East Ham, in 1983.

The temple, which has a south Indian style of architecture, is the biggest south Indian temple in Europe and the world’s second-largest Hindu religious place built in black granite stone. The main deity of the temple is Lord Murugan and it is one of the top attractions of the south Indian people in the UK.