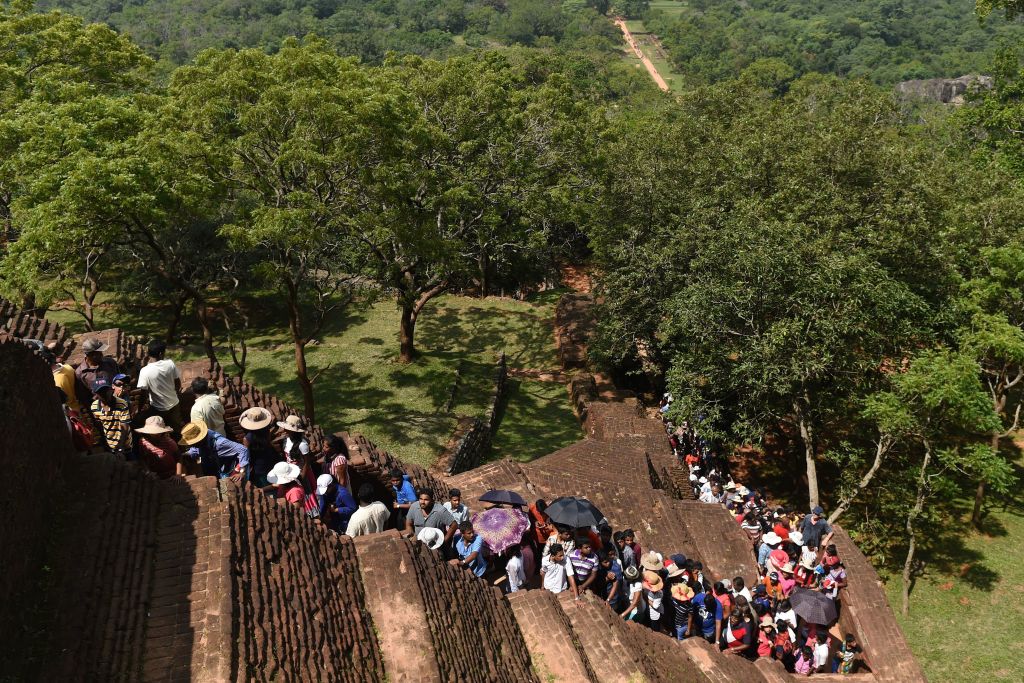 Sri Lankans and foreign tourists climb the 80-metre fortress of Sigiriya rock (the Lion Rock) in Sigiriya, north-central Sri Lanka, on February 11, 2017. Tourism is a major part of the Sri Lankan economy, which is now hit by the coronavirus. (Photo by ISHARA S. KODIKARA/AFP via Getty Images)

INTERNATIONAL ratings agency Moody’s placed cash-strapped Sri Lanka under watch for a downgrade on Tuesday on rising fears that the island nation could default on its foreign debt.

It said Colombo’s financing options were limited although it managed to obtain some bilateral loans.

Colombo has announced a $250 million (£183m) loan from Bangladesh, a fellow south Asian country with a much lower per capita income than Sri Lanka’s.

“The decision to place the ratings under review for downgrade is driven by Moody’s assessment that Sri Lanka’s increasingly fragile external liquidity position raises the risk of default,” Moody’s said.

In a desperate bid to save foreign exchange, Sri Lanka has banned luxury imports, including some food and spices, since March last year.

Sri Lanka’s finance ministry reacted angrily to Moody’s latest announcement, saying it was “unwarranted”, and warned it could reconsider employing the ratings agency.

“The unwarranted announcement by Moody’s… re-emphasises the need for the Sri Lanka government to revisit its relationship with rating agencies,” the finance ministry said in a statement.

The economy shrank a record 3.6 per cent last year on the back of lockdowns sparked by the Covid-19 pandemic. However, the central bank expects a growth of 4-5 per cent this year with the gradual reopening of the economy and the roll-out of its vaccine programme.