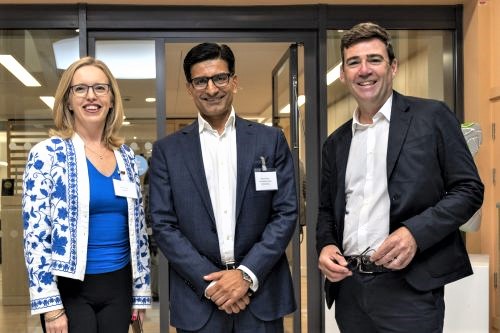 MANCHESTER, which is apparently “the most liveable city in the UK”, is taking the whole business of attracting inward investment from India very seriously.

Last Thursday (9), it held an “in person” Manchester India summit which was attended by more than 70 captains of industry and addressed by the Indian high commissioner Gaitri Kumar Issar who told delegates: “I look forward to seeing trade and investment with Manchester grow in leaps and bounds.”

The keynote address was delivered by the mayor of Greater Manchester, Andy Burnham, who visited India in November 2019. He said: “The relationship between Manchester and India is not just about trade, but a partnership built on trust. It’s the people-to-people relationship that is important.”

The Manchester India Partnership (MIP) was set up in February 2018 by MIDAS – Manchester Investment Development Agency Service – which was itself established in 1997. And MIDAS got the contract from the Department of International Trade for attracting investments into the Greater Manchester region.

Shehla Hasan, the executive director of MIP, told Eastern Eye: “The summit went off really well, with some great discussions on the UK-India Free Trade Agreement (FTA). There was a good buzz around the place as for most people it was the first in-person meeting after more than 18 months of Covid. This also demonstrates that Manchester is open and ready for business.”

Although the India-England Test was called off, 15 of the guests were taken for lunch at Old Trafford last Friday (10).

India’s high commissioner was the only one who delivered her speech virtually because she had to prepare for a visit this week by India’s commerce minister.

She began by thanking Burnham “for his leadership in creating policies, and an enabling environment that has made Manchester a key partner and destination for India’s business and investment”.

She said: “I would emphasise that Manchester being a hub of industry should count on India for supplies of raw materials and components. Our finance ministers (Rishi Sunak and Nirmala Sitharaman) met on September 2, and issued a very good and comprehensive joint statement, which should be of interest to all businesses and corporate houses, who are seriously looking at various sectors in India.” 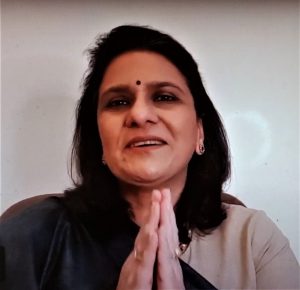 She added: “India has taken a number of steps to improve the ease of doing business. And one of the most recent is the amendment of taxation laws, which would, we hope, strengthen the business environment and the business contacts.”

The high commissioner also talked about the GIFT city project.

The Gujarat International Finance Tec-City (GIFT City) is an under-construction central business district in Gandhinagar in prime minister Narendra Modi’s home state of Gujarat. It has been described as “an integrated development on 886 acres of land which includes office spaces, residential apartments, schools, hospital, hotels, clubs, retail and various recreational facilities, which make this a truly ‘walk to work’ city.”

She said: “The GIFT city project represents India’s first financial services centre, which is international, and which has the potential of becoming a global FinTech and sustainable finance hub. And here, I wanted to mention that UK banks are the very first international banks to have established themselves in this FinTech hub.

“And then after that, our governments have also agreed on working together to facilitate dual listing of green social and sustainable bonds on the London Stock Exchange, and the international financial centre exchanges to enable firms to raise capital. I’d also like to mention the global innovation partnership that has been recently launched, which will, we hope, support the delivery of sustainable development goals and climate related goals.”

She added: “We’d like to invite you all to participate in the ‘Make in India’ programmes. And here I would like to particularly emphasise the healthcare sector, where India and the UK really are natural partners, where we have the potential to build on our complementarities and bring solutions to the world, whether it is in technology or equipment or pharmaceuticals.”

Some big names were present. The delegates were welcomed by MIP’s chair, Simon Arora, CEO of B&M Stores.

MIP’s deputy chair, Joanne Ahmed, partner at Deloitte, said she was “proud to have hosted the Manchester India business summit at our new Deloitte office in Manchester and hold our first significant in person event in 18 months”. She moderated the first panel discussion, “UK & India FTA – What this means for GM & India Relations?”

Limaye said: “We worked successfully during the pandemic crisis with UK supply chains and we are very happy to be here.”

Key points from the discussion were summarised as: “The FTA will simplify trade between United Kingdom and India; there are a wide range of export opportunities for businesses; Indian students are the second largest group of international students in the UK; there are opportunities between Greater Manchester and India in areas such as connectivity, education, sport and culture.”

Tim Newns, CEO, MIDAS UK, moderated another panel, “What opportunities does the UK government levelling up agenda bring to the GM-India corridor?”

The panellists were Mo Isap, founder and CEO IN4.0 Group and chief host at MCUK; Utkarsh Srivastav, head of brand and digital Europe, L&T Services; Alexander Ehmann, director of public affairs, Tata Group; and Kaushik Sindhu, associate vice president, 42 Gears; and Krishnan-Harihara Subramaniam, head of research, GM Chamber. Sindhu said: “Manchester is a wonderful cost-effective destination for SME high tech companies such as 42 Gears. The handholding by MIDAS was instrumental in our success in the UK.”

Ehmann added: “The UK India FTA will throw up new sectoral opportunities between the two countries. There is need to set up new collaborative standards around data.” Manchester is the UK’s “most liveable city”, according to the Economist Intelligence Unit. Among 140 cities surveyed across the world, Manchester came 38th in the 2021 report and London 48th.
Sheona Southern, managing director at Marketing Manchester, which aims to promote Greater Manchester, said: “This ranking recognises Manchester as a great place to live, with a growing cultural scene, vibrant food and drink offering and a thriving night-time economy. It is clear why growing numbers of people from the UK and across the world are attracted to live, work and study here.”