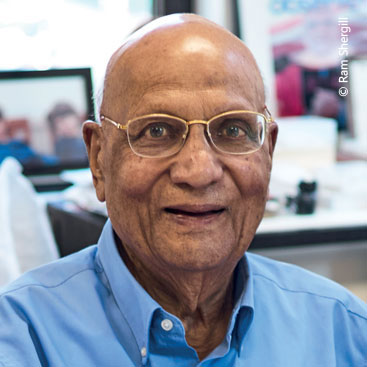 AT 87, LORD SWRAJ PAUL shows no signs of slowing down, although he feels he will never get over the loss of first his daughter, Ambika, when she was only four from leukaemia in 1968, and then his son Angad at the age of 45 in 2015.

“Without Ambika there wouldn’t have been any Caparo in existence even because if she had not fallen ill, we wouldn’t have come (from Calcutta) to the UK (to seek medical treatment),” he explains. “If she had survived, we would have gone back to India. The only reason I stayed was because she died here.”

Half a century has gone by since Ambika passed away but Lord Paul keeps up the tradition of giving a tea party every July at London Zoo, which used to delight his daughter in the closing days of her life. Lord Paul once gave £1 million to rescue the zoo from possible bankruptcy and at this year’s tea party, it was announced that he would help further with modernising its aviary.

Of course, the tea parties – some 500 invites went out this year – now remember his son as well. Without Angad, his father says, Caparo  would not have expanded in India where there are over 20 factories manufacturing automobile parts. In the US, where Caparo operates under the name Bull Moose Industries, there is now a boutique hotel in Angad’s name. Although many responsibilities in the family 59 business have been delegated to his children and grandchildren, Lord Paul keeps an over­view as chairman of the Caparo Group.

As with many Indian and Pakistani busi­nessmen, people who start off as their business contacts become personal friends. Lord Paul’s influence is perhaps most obvious outside his day-to-day business. At this year’s tea party, where foreign office minister Lord