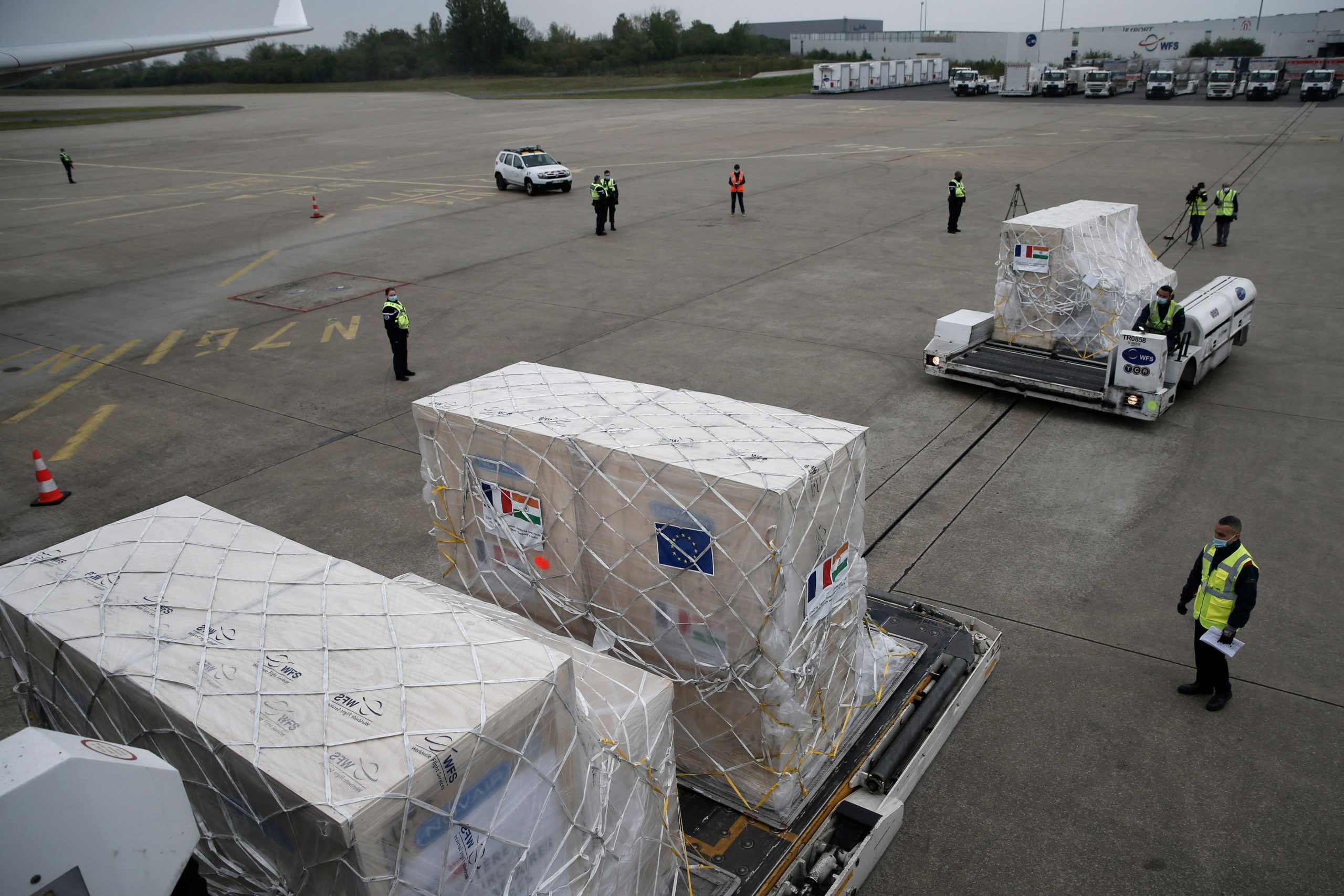 This photograph taken on May 1, 2021 shows medical supplies being loaded into a cargo plane to be sent to India, at Roissy airport, north of Paris. – France is sending oxygen respiratory equipment and generators to India to help the country deal with its Covid-19 crisis. (Photo by Lewis Joly / POOL / AFP) (Photo by LEWIS JOLY/POOL/AFP via Getty Images)
Follow Us

More emergency medical aid from foreign donors to alleviate a dire oxygen shortage arrived in India on Sunday, as Covid-19 deaths in the South Asian nation rose to a new record.

India is setting almost-daily records for new infections and deaths as the virus crisis engulfs overstretched hospitals in cities and spreads into rural regions.

The country of 1.3 billion reported 3,689 deaths on Sunday — the highest single-day rise yet in the pandemic, to take the overall toll to more than 215,000.

Just under 400,000 infections were added, bringing the total number of cases past 19.5 million.

The latest figures came as medical equipment, including oxygen-generation plants, was flown into the capital New Delhi from France and Germany as part of a huge international effort.

“We are here because we are bringing help that… will save lives,” Germany’s ambassador to India, Walter J. Lindner, said as 120 ventilators arrived late Saturday.

“Out there the hospitals are full. People are sometimes dying in front of the hospitals. They have no more oxygen. Sometimes (they are dying) in their cars.”

“The epidemic is still going on in one country. The world won’t be safe until we are all safe. So it’s a matter of urgency,” he said early Sunday following the delivery of eight oxygen-generation plants and dozens of ventilators from France.

India’s eastern state of Odisha on Sunday became the latest region to order a lockdown to slow the spread of the pathogen.

The nation’s worst-hit city, Delhi, reported just over 25,000 cases on Saturday as it extended its own lockdown by another week.

Hospitals in the capital continued to issue SOS calls for oxygen on social media, with the latest appeal posted by a children’s hospital on Twitter on Sunday.

The plea came a day after up to a dozen patients died at a Delhi hospital amid an oxygen shortage, local media reported.

There are also growing fears about the surge of the virus in small cities, towns and rural regions where health infrastructure is already patchy and limited.

India on Saturday opened up its inoculation drive to all adults, but supplies are running low and only online enrolments are allowed for those aged under 45.

“It is a necessity now. We are seeing so many people testing positive,” data scientist Megha Srivastava, 35, told AFP outside a Delhi vaccination centre as she waited for her shot.

The head of the world’s largest vaccine maker, Serum Institute chief Adar Poonawalla, told The Times newspaper on Saturday during a business trip to Britain that he was being hounded by political and business leaders for more supplies.

“‘Threats’ is an understatement,” he told the paper. “The level of expectation and aggression is really unprecedented. It’s overwhelming. Everyone feels they should get the vaccine.”

Experts have called on the government to allow more flexibility in India’s vaccine rollout, particularly in poorer rural areas where there is lower internet penetration.

“Take vaccines to the people the way we have implemented our polio and measles campaigns.”

Alarm bells are also ringing in other countries in densely populated South Asia.

“Infections have surged beyond the capacity of the health system,” Nepal’s health ministry said Friday as it warned that hospital beds were running out amid a spike in infections.

On Saturday, the Himalayan nation recorded 5,706 new cases, just shy of a pandemic high of 5,743 in October.

The government has enforced lockdowns or partial lockdowns in almost half of Nepal’s 77 districts.

In Sri Lanka, daily infections hit a record 1,699 on Saturday, with authorities imposing further curbs on movement and activities in parts of the island nation.

“We could face an India-type crisis very soon unless we arrest the current trend of infections,” chief epidemiologist Sudath Samaraweera said.